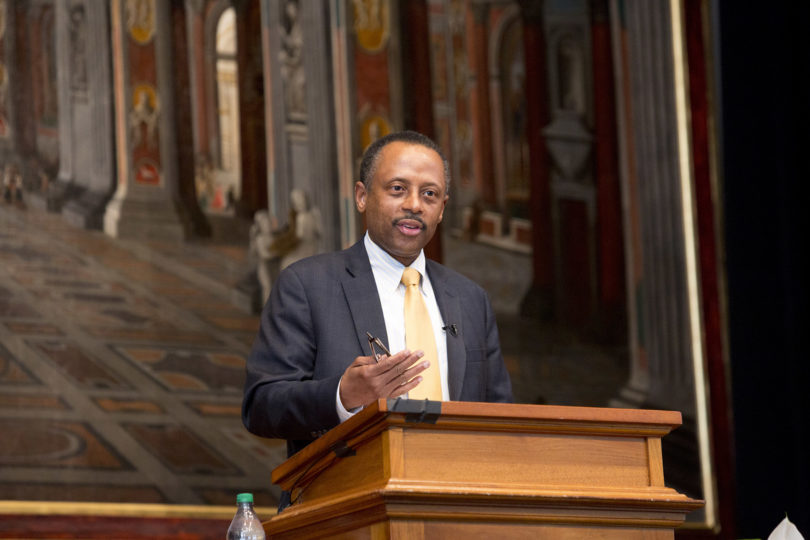 Earl Lewis grew up with an appreciation for a college education, fostered by his maternal grandmother. The daughter of a man born into slavery who still managed to learn to read and write, she aspired to attend college but never made it; the money she had saved to pay her way having gone to more pressing needs. But she passed her ambition on to her children and grandchildren.

“There was never a question of whether I was going to college,” Lewis told the audience who had come to hear him deliver the 27th annual Louise McBee Lecture in the Chapel on March 24. “The only choice afforded to me was where.”

Lewis not only went to college but also to graduate school and on to an illustrious academic career, which included faculty appointments at the University of California at Berkley and the University of Michigan on the way to serving as provost and executive vice president for academic affairs at Emory.

He left that post to become the sixth president of the Andrew W. Mellon Foundation, which provides support for humanistic scholarship, liberal arts and doctoral education as well as the performing and visual arts.

The topic of Lewis’ lecture was America’s future, which he believes depends on continuing to expand access to higher education.

“Education is the only thing that can’t be taken away,” a young Lewis was told by his grandfather, a firm believer in the power of education. Today, Lewis said, research has shown the benefits to the individual and to society of obtaining a college degree. But access to education is not enough, he said.

“Colleges and universities need to move from an emphasis on admissions to an emphasis on completion,” he said, which involves asking questions about how students learn and being innovative and adaptive.

“We used to think of a generation in terms of 20-25 years,” he said. “But the digital age has altered that. Now a ‘generation’ is 18 months—the time it takes to introduce a new technological innovation.”