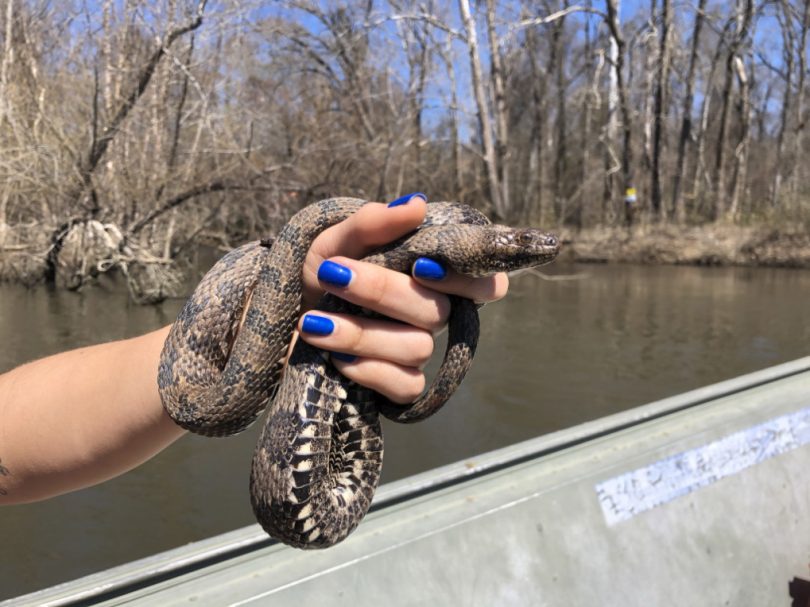 A researcher holds up a brown watersnake captured in the Steel Creek area. (Photo by D.L. Haskins)

Mercury has decreased in a creek on the U.S. Department of Energy’s Savannah River Site, according to researchers at the University of Georgia. 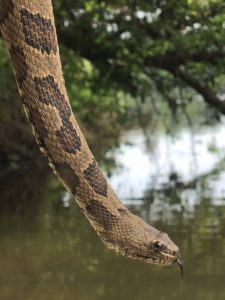 The two cohorts of brown watersnakes were captured in the same creek near Augusta, Georgia, and Aiken, South Carolina, a tributary that feeds into the Savannah River, according to first author David Lee Haskins.

When mercury becomes elevated in an environment and comes into contact with bacteria, it transforms into methylmercury, explained Haskins. When methylmercury moves up the food web, it can have a destructive effect on internal organs and threaten the lives of humans and wildlife.

“By the time methylmercury moves from a lower species to a higher species, that higher species is getting all of the contaminant,” said Haskins, who recently earned a Ph.D. from UGA’s Savannah River Ecology Laboratory and Warnell School of Forestry and Natural Resources. “As it goes from plankton to a fish to a bigger fish to a bird, it’s going to exponentially increase.”

A significant amount of the mercury in the area most likely came from a former alkali plant that dumped mercury upstream of the tributary prior to Environmental Protection Agency regulations, according to Tracey Tuberville, a senior research scientist at SREL and Haskins’ advisor during the study.

The documented decrease in mercury levels in snakes over time highlights the effectiveness of these environmental protections. As a result, snakes in the Savannah River system are likely healthier than they were in the 1980s.

Brown watersnakes, which have a very small habitat range, are a valuable asset in assessing aquatic systems for heavy metal pollution, particularly in the Southeastern U.S., where they’re abundant and found near bodies of water, according to Haskins.

“The levels in contemporary snakes we examined in this study are similar to snakes I’ve collected throughout my dissertation period from all over the river, but the levels in the snakes from the ’80s are higher than any I’ve ever collected,” he said. 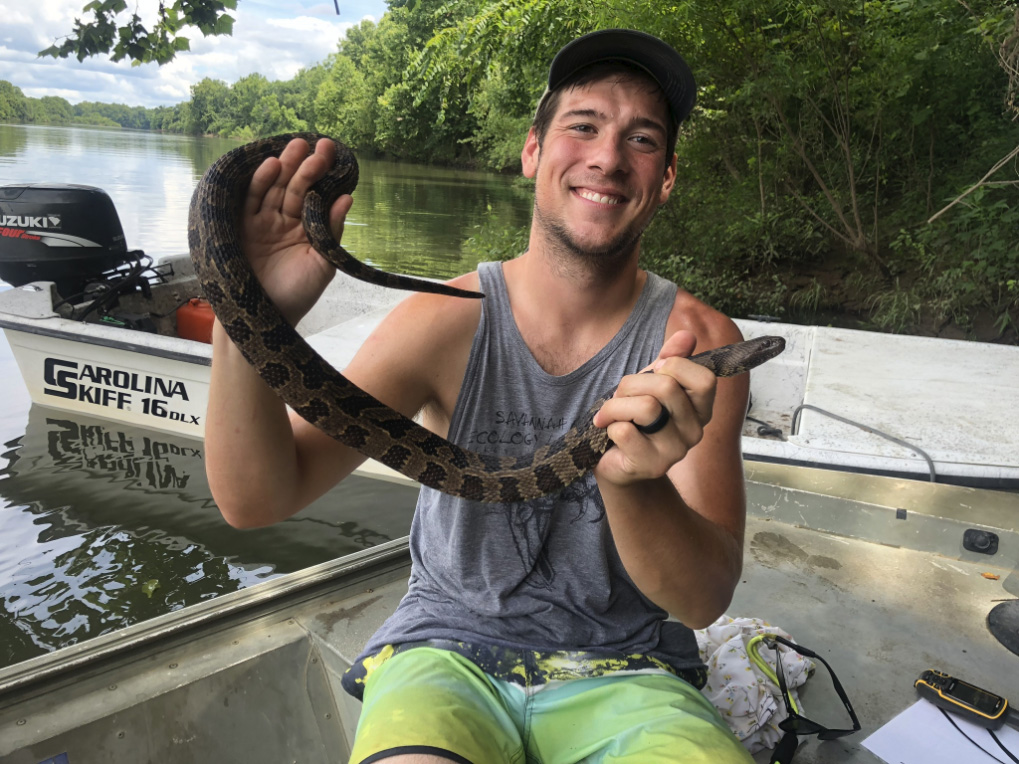 The researchers dissected and examined the kidney, liver and muscle tissue in all of the snakes to obtain the levels of total mercury and methylmercury. They also evaluated the tail tips and blood to determine if there was a relationship between the level of the contaminants in the tips and their internal tissues, testing a minimally invasive procedure that will allow researchers to do long-term studies on the same animals using capture-mark-recapture techniques and without sacrificing animals, Tuberville said.

“We now know the relationship between blood in an animal and what you can expect to find in its muscle tissue,” she said. “We can analyze a blood sample and calculate or predict what the muscle value should be.”

Having access to the archived research, housed at the lab on the SRS, a limited access site, shows the value of SREL’s presence on the site, according to Tuberville.

“We’ve had a presence over the entire time period, which gave us an opportunity to compare data from early on to contemporary values,” she said. “Our long history here makes it possible to make these really long-term comparisons that you can’t get many other places. You can’t cover everything over a 70-year time period—the time SREL has been on the site—but in this study we have snapshots 40 years apart.”

Co-authors on the study include M. Kyle Brown, Warnell School and SREL; Chongyang Qin and Xiaoyu Xu, SREL; Melissa Pilgrim, The Division of Natural Sciences and Engineering at the University of South Carolina Upstate, Spartanburg.