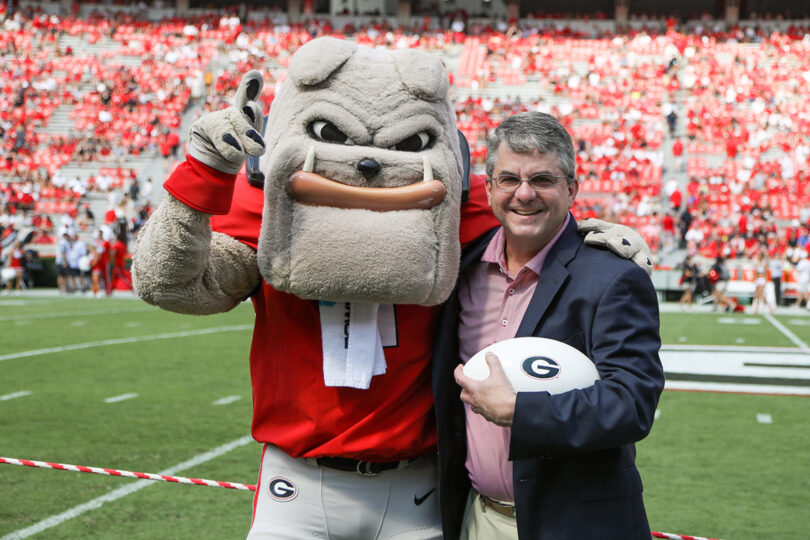 Piedmont Athens Regional Medical Center is the largest hospital in Athens-Clarke County, and it serves 17 counties in northeast Georgia. The hospital is also the official health care provider for the UGA Athletic Association. So, CEO Michael Burnett BSA '93 and his team are use to treating Dawgs, including Hairy ones. (Chamberlain Smith/UGA)

You plan for the worst, but you hope for the best. That’s Michael Burnett’s mantra. As the CEO of Piedmont Athens Regional Medical Center, it’s a good one to have.

Piedmont Athens Regional is Athens-Clarke County’s largest hospital, and it serves a 17-county region. When the COVID-19 pandemic hit in March, Burnett BSA ’93 and his team had already been tracking the virus for months. They were ready.

They launched a command center to help with messaging and communication, not just to local staff but with other hospitals across the network. Piedmont Athens Regional had already procured enough medical supplies to respond to a surge in patients. Elective surgeries were postponed, patient visitation halted, and the entire hospital dug in for a months-long fight.

“I think the most important thing for me was making sure that our caregivers and physicians were supported and that they had the right tools to deliver the best possible care,” says Burnett. “What can we do to take care of our employees? They are front-line workers in a chaotic environment.”

Burnett and his team have been creative. For instance, Piedmont Athens Regional’s childcare center was there for employees who didn’t have other options. Also, in the early days of the pandemic, with information (and misinformation) pinballing all over the place, Burnett began a series of daily messages to staff that served as both information and motivation. Eventually video messages from Bulldog luminaries such as Kirby Smart BBA ’98 and Vince Dooley were added to the mix—more than 40 at last count. (Piedmont Athens Regional is the official health care provider for the UGA Athletic Association.)

“I am proud of our team,” Burnett says. “They understand the needs of the patients. We call it our new COVID world we are living in.”

Burnett always knew he wanted to work in health care. After earning his bachelor’s in biology at UGA and dual MBA/MHA at Georgia State, Burnett joined Piedmont Healthcare in 1996. He steadily worked his way up the leadership ladder. He started in in Atlanta, then moved back to his hometown of Fayetteville, and eventually rose to CEO of Piedmont Fayette Hospital in 2014. But when the opportunity came to move to Athens in May 2019, the decision was an easy one.

Burnett met his wife Amy BBA ’93 in a psychology class while they were students at UGA, and their son Michael started his first year at UGA in 2019. While Burnett was a student himself, he worked as a patient registrar at Piedmont Athens Regional (then Athens Regional Medical Center), so the move brought him full circle.

“I’ve always felt that this is where I started my hospital career,” he says. Governing roles in his fraternity and with the Interfraternity Council also helped hone the leadership skills that would come in handy down the road. “You look back and realize how leading peers helped prepare me for the future.”