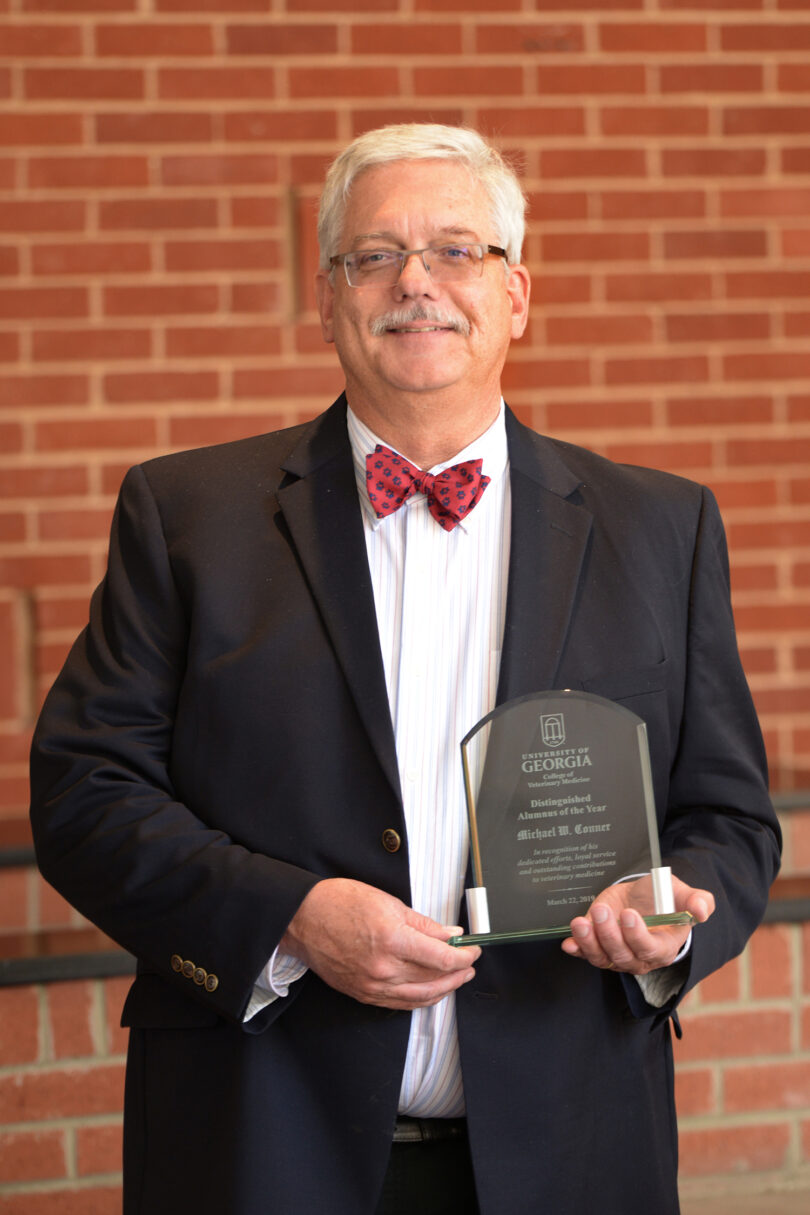 Michael Conner DVM '79 was the recipient of the Distinguished Alumni Award from the UGA College of Veterinary Medicine in 2019.

When Michael Conner DVM ’79 flashes onto the Zoom screen for an interview, his background is a low, flat building with a woodpile on the front porch. “This is the one-room shack I lived in during vet school, at the chicken farm I used to work on,” Conner says. “There was no A/C, a beehive in the wall, copperheads and moccasins on the porch, and bats flying through.”

All creatures great and small, indeed.

Forty years later, Conner isn’t examining or doing surgery on animals. But that broad education has come in handy in a career spent fighting diseases. He pursued postdoctoral training in veterinary and comparative pathology at Harvard Medical School and in comparative pathology and toxicology at MIT, eventually becoming faculty at Boston University and adjunct faculty at Tufts before joining the pharmaceutical industry at SmithKline Beckman (now Glaxo-SmithKline) and Merck.

He later went to the West Coast where has worked for the last 22 years, settling in a home near the ocean in Half Moon Bay, California. “The examination of tissues is part and parcel of how we evaluate drugs for risk,” says Conner, who led programs in toxicology and pathology that resulted in several useful drugs being marketed, including therapeutics for unstable angina and drug-resistant bacterial infections.

At Global Blood Therapeutics in South San Francisco, he continues to work on developing and improving drugs for sickle cell disease. “I came here,” says Conner, “because if you’re successful, you can have a real impact on human health, not just make incremental changes.”

As a teacher and a researcher himself, Conner would like to see more education and understanding around the fact that science is a process, with knowledge building upon itself and evolving over time. This is a lesson that’s true for the ongoing pandemic, he says: “People get confused and frustrated when experts change their recommendations. But we, as scientists, prove or disprove our hypothesis through experimental challenges and react as we learn more.”

Conner, who received the Distinguished Alumni Award from the College of Veterinary Medicine in 2019, says his motto—and why he chooses to donate to student scholarship at UGA—is this: “If you’ve had some modicum of success in life and you think you did it on your own, that means you’re forgetting all the people who helped you along the way. You need to become that person to someone else.”