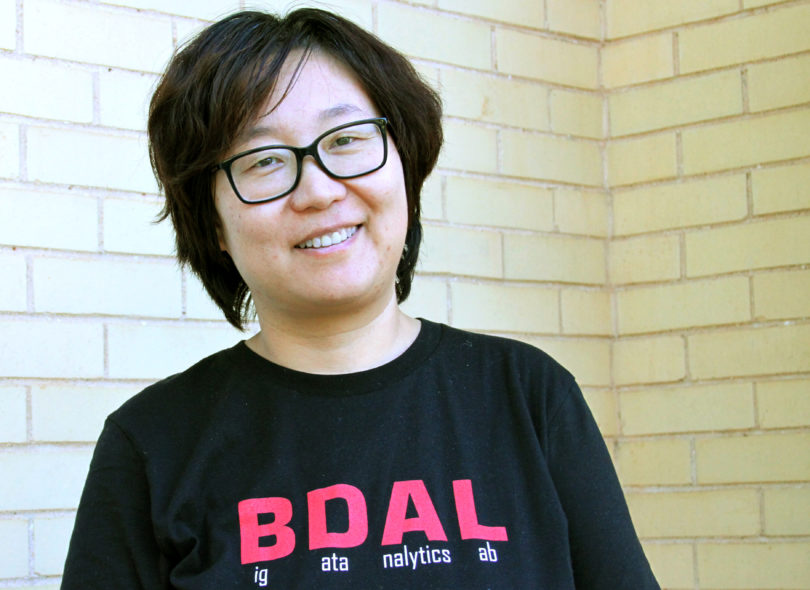 A new computational tool developed by University of Georgia researchers shows promise for further understanding and identifying the complicated makeup of the microbiome.

Microbes, found everywhere—in our environment, on our skin and in human bodies and consisting of bacteria, archaea, fungi, protozoans and viruses—form microbiomes that have both good and harmful implications for human health.

With the creation of this new big data tool, researchers will help identify differences in patterns of microbes that may lead to a better understanding of chronic diseases such as diabetes and obesity.

“Accumulating evidence suggests that the microbial ecosystems play a crucial role in human health. However, compared to the huge amounts of medical research on human cells, our understanding of the microbial ecosystems is very limited; the biodiversity of them is not completely understood, not to mention their interactions with the human host,” said Wenxuan Zhong, professor of statistics and director of the UGA Big Data Analytics Lab.”

Zhong and her team have created a new computational tool called MetaGen that can simultaneously identify microbial species and estimate their abundance in multiple samples.

“MetaGen is able to quantify their distributions in large microbial communities,” Zhong said. “With the growing number of the samples being sequenced, our effort will greatly help both the computational biologist and the experimental biologist in studying the changes of the microbial ecosystems, detecting pathogens and reducing the diagnostic error in microbial-related human diseases.”

Zhong and her team tested metagenomics data of chronic diseases such as inflammatory bowel disease, Type 2 diabetes and obesity. They were able to test 378 billion base pairs, which is the equivalent of testing over a hundred human genomes at once.

More than 2,000 microbial species were identified, in which only 10 percent have their genome sequenced,” said Zhong. “We found that eight species were significantly more common in IBD patients and found one beneficial bacteria, Roseburia intestinalis, significantly less abundant in Type 2 diabetes patients. These findings will likely help to identify future therapeutic targets for these diseases.

While big data methods continue to inform us more about the complicated nature of human disease and our environment, advances in computing power combined with the novel statistical methods create a “perfect storm” for discovery. This new tool means researchers can sequence large amounts of DNA, in bulk, that has been extracted from environmental samples, instead of lab cell cultures. This allows researchers to identify novel microbial species and study their distribution variation in different samples.

“A sample with mixed bacteria is sequenced all together, but we cannot sequence the full genomes at once,” she said. “Instead the tool sequences fragments so the genomes are fragmented. After the fragments are sequenced, they are then aligned to show the makeup of thousands of full genomes.”

“A colleague of mine talked about my research recently on a podcast and came up with the perfect analogy,” she said. “It is like solving jigsaw puzzles, he said. The difficulty is not solving one jigsaw puzzle, but solving thousands of jigsaw puzzles all mixed together at the same time.”

Using metagenomics to study microbiomes cannot produce accurate results unless a high-resolution metagenomics tool is available. MetaGen provides a new way for researchers to obtain metagenomics analysis and has the potential to help provide a clearer picture of the microbiome’s relationship to human disease and environmental conditions.

“We hope our method can help more biologists in studying the composition of microbiomes in a wide range of fields. We further aim at strain-level binning as only some strains are related to certain disease such as gastric cancer.”

This tool is a good start to increasing knowledge in this area, but collaboration among scientists using this tool will provide the best means for understanding microbiome patterns on a large scale.

“To have a comprehensive understanding of human disease, metagenomics study alone is still insufficient,” she said. “We are collaborating with scientists on campus and around the world to further link metagenomics with chemical interactions in living cells. We hope to enhance our understanding on how metagenomics differences are translated into differences in chemical reactions that occur in living organisms, including digestion and the transport of substances into and between different cells.”

The research was published in Genome Biology. The full paper is available at: https://genomebiology.biomedcentral.com/articles/10.1186/s13059-017-1323-y

The research is part of the National Microbiome Initiative: https://obamawhitehouse.archives.gov/blog/2016/05/13/announcing-national-microbiome-initiative