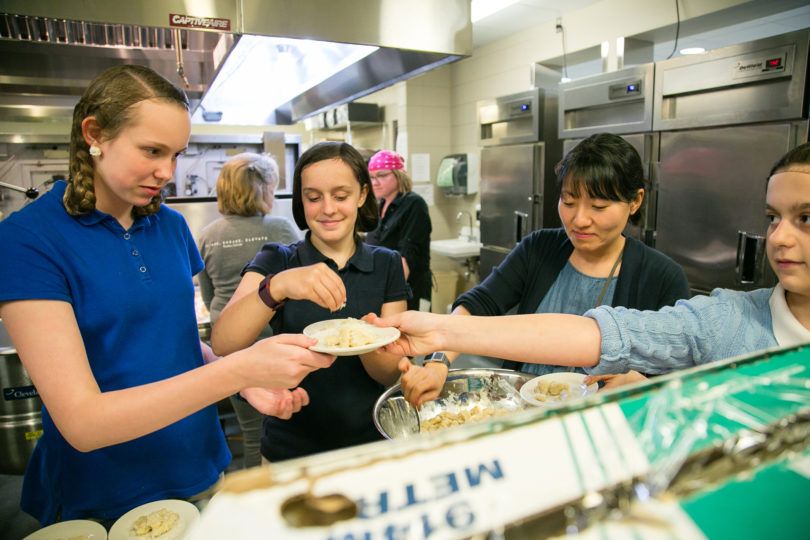 Meals in the Middle

When Wick Prichard arrived at Clarke Middle School in 2014, his goal as an AmeriCorps VISTA with the University of Georgia was to turn the sustainability lessons he’d been teaching at summer camps into a daily curriculum.

Just three years later, Prichard is a full-time university employee, coordinating garden programs at Clarke’s four middle schools, including the farm-to-table operation, “Grow It Know It,” that he worked with the UGArden to create at Clarke Middle.

On March 16, the public was invited to join Prichard and middle school students for Meals in the Middle, a multi-course made-from-scratch dinner planned, prepared and served by the sixth- to eighth-grade students.

The meal, which included produce from the UGA student-run UGArden, raised more than $1,000 for a local nonprofit organization. The three previous Meals in the Middle raised an average of $1,500 each, with proceeds going to the Athens Area Homeless Shelter, U-Lead Athens and the Interfaith Hospitality Network. The March 16 meal benefitted Experience UGA, a partnership between UGA and the Clarke County School District that brings every CCSD student to campus for a field trip each year.

Prichard, who works for the UGA Office of Service-Learning with support from UGA Cooperative Extension and CCSD, sees the dinners as a “start-up company with kids,” one that builds on the education about recycling, composting, nutrition and food insecurity that the middle school students are getting through their agriscience programs.

“We are making the program as we go, and the students get to participate in that process,” Prichard said. “I think there’s a general excitement felt by everyone. People love this program. It’s incredible.”

UGA’s partnerships with CCSD have led to many new opportunities for pre-K through 12th-grade students in Athens-Clarke County. A program piloted in 2009 and expanded to all Clarke County schools in 2011, brought UGA College of Education faculty into the schools to serve as professors-in-residence or on-site instructors, offering onsite guidance and mentoring to College of Education students, Georgia’s future teachers.

The school gardens sustainability program at CMS became a model for the system under Prichard’s direction and now there are AmeriCorps VISTA volunteers in all four middle schools.

“Wick’s work here has been transformative,” said Tad McMillan, CMS principal. “If our kids are not healthy, we’re not doing them any favors.”

High obesity rates make programs focusing on health and nutrition a must, McMillan said. More than 17 percent of adolescents and 35 percent of adults in Georgia are overweight, according to data from the Centers for Disease Control and Prevention.

Part of each school’s agriscience curriculum, the garden programs are a way for the students to learn about nutrition and health while having fun.