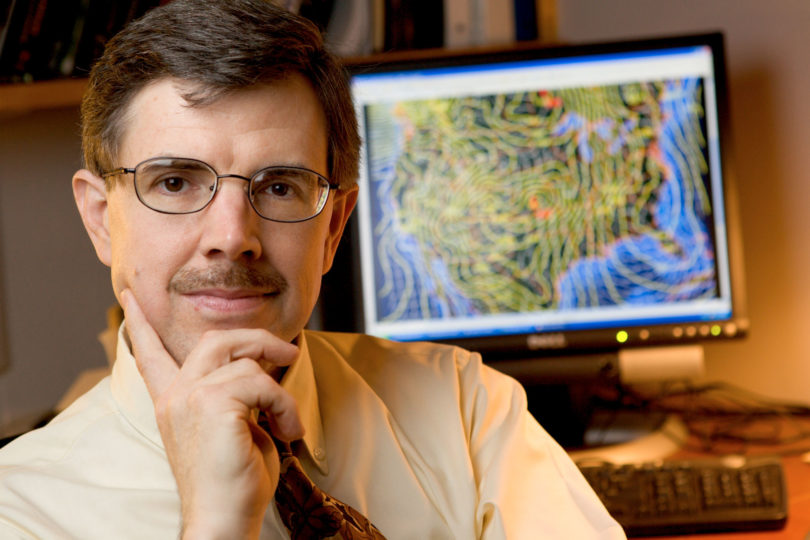 For UGA faculty member Alan Stewart, it’s all about the weather.

Stewart, an associate professor of counseling psychology in UGA’s College of Education, hopes the research he is currently pursuing will lead to the development of a new field of academic study involving psychology and climatology.

Welcome to the world of behavioral climatology.

Presently, there is no such field or course offered at any university in the country, but Stewart’s ambition and research may be about to change that. In January, Stewart was invited to present his research at the 86th annual American Meteorological Society in Atlanta.

“Presenting at the conference was an honor because I have always had a passion for meteorology, and being able to combine my counseling psychology background with climatology is the best of both worlds,” Stewart says.

So, what is behavioral climatology? The term refers to the way in which weather and climate affect psychological variables such as behaviors, moods and thoughts.

“Behavioral climatology is closely related to applied climatology-­although, how weather and climate affect people both in terms of their mental and physical health, and from a safety prevention standpoint, has not really been studied,” Stewart says.

The benefit of researching the subject, he says, is that if one is aware of how climate affects oneself it allows that individual to take a preventative approach to his or her health. Knowing that you are more inclined to become depressed when it is constantly raining may prevent you from taking a job in Seattle, he says.

Stewart experienced this himself when he worked for a few years in Florida where he discovered he desperately missed the passing of the four seasons.

“Christmas was not what I was used to because it wasn’t cold outside and there were people in flip flops and tank tops headed to the beach, instead of families building snowmen in their front yard,” he says. “Had I known that my ultimate happiness was not warm weather and sunshine 365 days a year, I might have altered my path in life.”

Surprisingly, Stewart says not everyone’s perfect weather day is sunshine with no trace of clouds in the sky.

“For instance, I do my best work on a chilly day when it’s raining outside,” he says.

Most of us become very accustomed to what we grew up with, according to Stewart. Even though physically we are capable of adjusting to a new environment, there will most likely be mood changes as a consequence of climate change.

While some may doubt the significant role weather can play in affecting a person’s mood, Stewart says that it may not be just the weather per se, but rather, what ripple effect the weather has on your day.

Chances are, if you are inside all day and don’t have a job or activities that you enjoy outside, the weather may not be a concern to you, he says. But something as simple as a rainy day can cause more accidents on the road. This may not be a big deal if you live five minutes from your work, but if you commute from Athens to Atlanta every day, your one-hour commute then becomes a two- to three-hour commute, which could put anyone in a foul mood.

While that may not surprise anyone, preliminary survey results indicate some unusual findings when looking at events that spur individuals to become more active in seeking out weather information. It seems as though people have to experience three or more severe weather events before they begin to make an effort to seek out weather-related information or become more in tune with sensing and observing weather, according to Stewart.

Continuing his research to discover the different ways weather affects ­people, Stewart has collected nearly 1,000 Internet questionnaires from UGA students. To gauge the importance of weather, the self-report survey asks students: how often they seek weather information from media sources and how frequently the weather causes their mood to change.

Stewart is applying for grants to finance a larger study that would allow him to test subjects other than college students.

Stewart, who joined the UGA faculty in 2002, has established his line of research in the areas of death, loss and trauma. His specific research interests involve death notification following fatal vehicular crashes, death notification training and the psychological effects of surviving serious crashes. He also has an interest in measurement and evaluation and has created several scales for use with people who have experienced crashes: the Driving and Riding Avoidance Scale and the Driving and Riding Cautiousness Scale. Stewart also has studied family emotional processes and the ways in which language can be used to characterize one’s family of origin experiences or to construct healing narratives in the aftermath of a trauma.