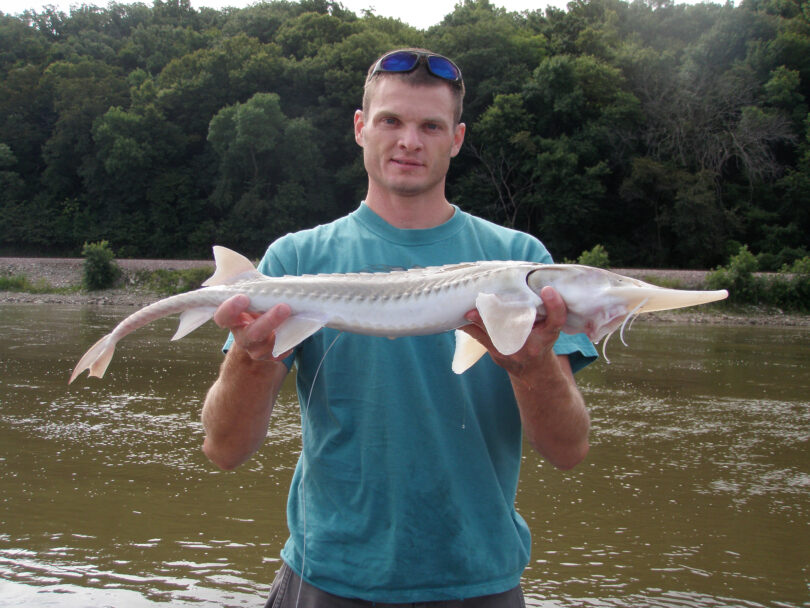 In the lower Missouri River, a fish with prehistoric ties has learned to live hard—and, too often, die young.

Now, a new study by a University of Georgia professor details the ways pallid sturgeon have adapted to less-than-ideal conditions. Fish that live where their habitat has substantially changed have responded by growing faster and reaching sexual maturity at an earlier age, resulting in a shortened lifespan.

Though perhaps not ideal, this typically long-lived fish has found a way to persist while facing extinction due to widespread changes in its river system.

Adjusting rather than evolving

The findings are a first for this type of species and the paper, published this month in the journal Scientific Reports, offers vital insight into an endangered species. It details the fish’s “plasticity,” or the ability to adjust—rather than genetically adapt—to large-scale changes in the environment. 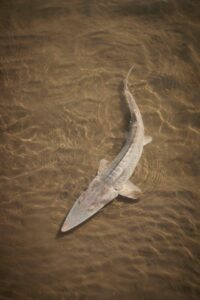 A pallid sturgeon in the wild. (Submitted photo)

While genetic adaptations take place over generations as a result of natural selection, plasticity represents small shifts in a species’ life history without a genetic adaptation. The amount of plasticity, or variation, is often difficult to determine and is unknown for many organisms—especially long-lived ones such as sturgeon.

“For a traditionally long-lived species, this plasticity hasn’t been documented before,” said Marty Hamel, an assistant professor of fisheries and ecology at the UGA Warnell School of Forestry and Natural Resources. He observed these changes in a portion of the Missouri River that has changed dramatically over the years; now it looks completely different from its historic conditions. “So, those environmental influences, they have an impact on age and growth characteristics where they ultimately impact life-history traits like longevity and age and size at sexual maturation.”

For example, Hamel’s research found that adult sturgeon in the lower portion of the river are much smaller in size. This translates to fewer eggs per female—in the order of 15,000 per fish compared with about 121,000 upstream. Because their harsh living conditions require additional energy just to survive, any surplus energy goes toward reproductive activities instead of fish growth, Hamel said.

Figuring out a fish’s age

He also determined that while sturgeon in the upper Missouri could live to be 100 years old, sturgeon in the lower Missouri would live less than half as long, averaging about 39 years. But to do this, Hamel had to mark another first for pallid sturgeon: A way to find their age.

“I got all this mark-recapture information and when I came to UGA (in 2019), I started working that up to try and get a formula to estimate the age of these fish, because we had no clue,” he said. Mark-recapture refers to a method where an animal is noted over time in different places on the landscape. “They’re an endangered species, so having that age information is really important for understanding the population. Age data are fundamental for many of the metrics we observe—like growth and mortality rates—and having that information allows researchers to model or forecast how the species might respond to conservation measures such as habitat improvement projects or restocking strategies.”

He added that while there has been a lot of research done on pallid sturgeon in the last decade, there remained this knowledge gap in understanding the complete life history of the fish. “That’s something I was interested in, and I found a way to figure it out.”

For about 20 years, fish hatcheries have been capturing wild pallid sturgeon, spawning them in captivity and releasing their offspring back into the river. Each fish that is released has a unique “PIT” tag—the same kind of microchip used to identify household pets if they are lost—and when they are caught by researchers later in life, the tags can be scanned to learn  how much the fish grew and how far they have traveled from where they were released. 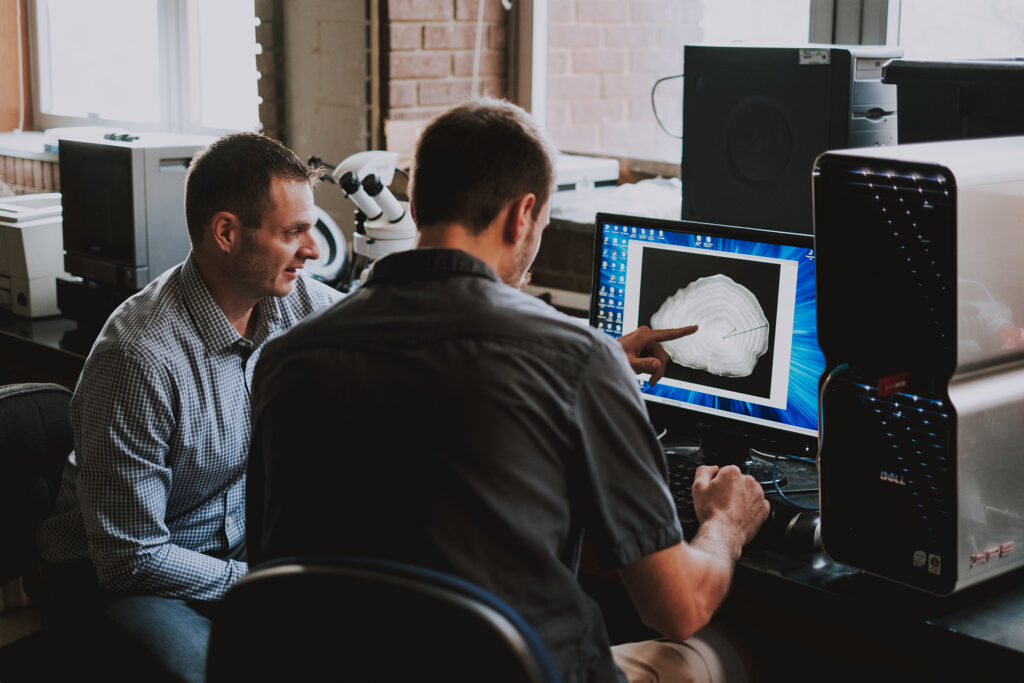 Using this information, Hamel was able to apply known ages of hatchery-raised fish and determine a formula that could be used to estimate age for wild fish. Determining age can be problematic for sturgeon—the age of most fish can be found by examining a cross-section of a pectoral fin or a fish’s ear bone. But the reliability of these structures in most sturgeon is poor owing to their slow growth as adults and their environment. So, while they have the potential to live for decades, their age and longevity have largely remained a mystery.

Hamel now plans to build on these analyses by incorporating additional genetic tools and applying this information to sturgeon in the Southeast. Of the nine species found in North America, five can be found in or adjacent to Georgia—Atlantic, shortnose, Gulf, lake and Alabama sturgeon. Hamel, who has been studying sturgeon for more than a decade, is now pursuing projects that involve all of these fish.

“It’s all very relatable—understanding the age structure and longevity of these imperiled sturgeons is vital for management and recovery,” he said. “For example, up the Northeast coast, Atlantic sturgeon are much larger than those that occupy the coastal rivers of Georgia. If smaller size equates to decreased longevity, these fish will have a reduced number of lifetime reproductive events. That type of information would be really beneficial to aid in recovery efforts.”