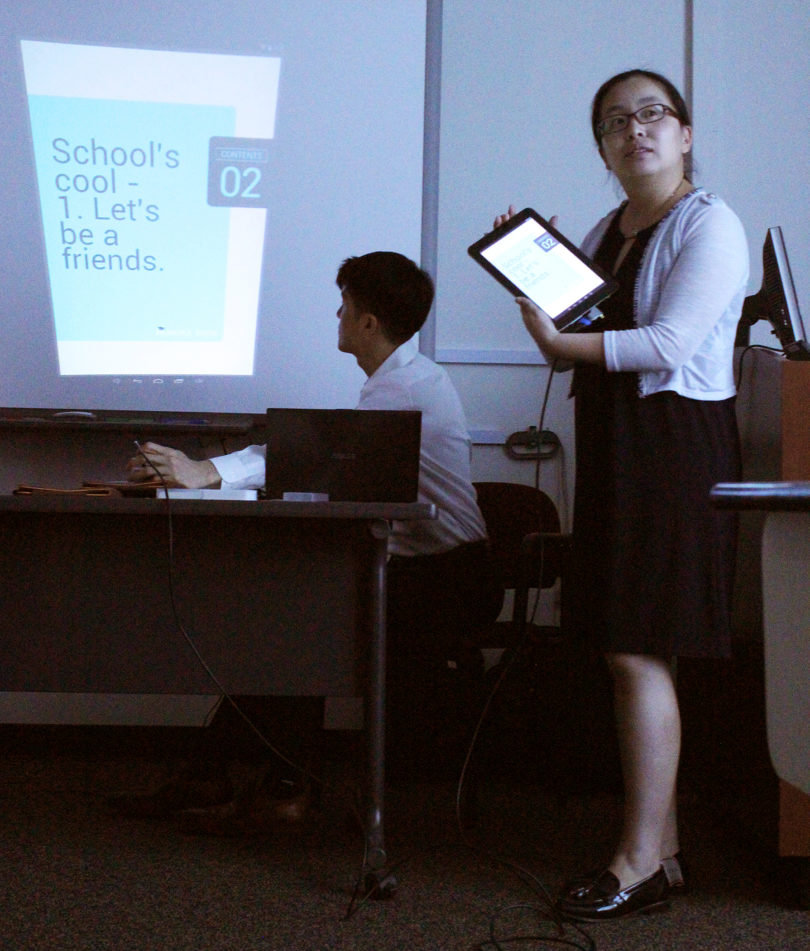 Research partnership to look into using tablets and smartphones for testing

Athens, Ga. – A new partnership between the University of Georgia and the South Korean technology start-up North Star Developer’s Village, or NSDevil, will give professors access to a new kind of testing technology for mobile devices, all while gathering information that can help enhance education around the world.

Known as an “ubiquitous-based test,” or UBT, the system uses tablets or smartphones to administer tests. These connect to a local server that does not need to be connected to the Internet during the test, unlike current computer-based models. Teachers can monitor student progress during the exam-even seeing the battery life of the tablets-and results are instantly calculated once time is up.

The end result is less paper used, less time spent scoring the tests, and a wealth of information gathered on how students respond to questions, the technology and the design of the test itself. And because the system can run off solar cells, tests no longer have to be taken in a traditional classroom.

“Internet technology can hinder people who don’t have the technology, but this system can move around, offering more opportunities,” said Choi. “The company is very proud of its technology, but now it wants to work with educators to enhance the pedagogical way.”

During an on-campus demonstration earlier this fall, Kinam Park, strategy and planning manager for NSDevil, showed a sample of a test used in Vietnam, where five elementary schools are using the system. Set up like a comic book, students could read along with the flick of a finger, then touch phrases that best completed questions about the story. The system is now used in 10 countries; in the Philippines, one university adopted the system to use for its college entrance exams, Park said, and by 2020 all medical schools in Korea will use it for their residency exams.

“We hope to work with UGA to expand on our project,” said Park, through a translator. “We believe (ubiquitous-based tests) can replace paper-based, computer-based and Internet-based examinations. It’s more stable and it reduces costs-A UBT can reduce costs by more than 50 percent”

By partnering with UGA, NSDevil can collect more research on their products while reaching a larger, more technologically advanced market. Choi said educators across UGA are encouraged to give the technology a try, and he’s collaborating with the College of Education-based Georgia Center for Test Assessment on future possibilities with the technology.

At UGA, uses of this test could give professors more freedom in where they give their tests. For example, veterinary students could take their tablets into exam areas for a test, health care students could be tested in a real-life clinic situation, or classes interested in testing psychology or simply offering a new format using tablets could experiment with the new tests. Allan Cohen, director of the Georgia Center for Assessment, said the test is ideal for situations where there is no Internet access, or in high-stakes tests where security is important.

NSDevil’s overall goal is much larger, though. The system’s low cost-a server/relay system can be purchased for less than $1,800, and NSDevil is working with giant tablet manufacturer Foxconn to produce tablets for less than $200 each-makes it possible for schools in rural areas and third-world countries to administer high-quality lessons and exams.

“We witness many students with a passion for education, but are in a situation where they can’t advance their learning. So we began to work on a global level-all learners can learn where they are,” said Park. “We first experienced the iPhone outside of Korea and we knew that such a small device can change the future of education.”