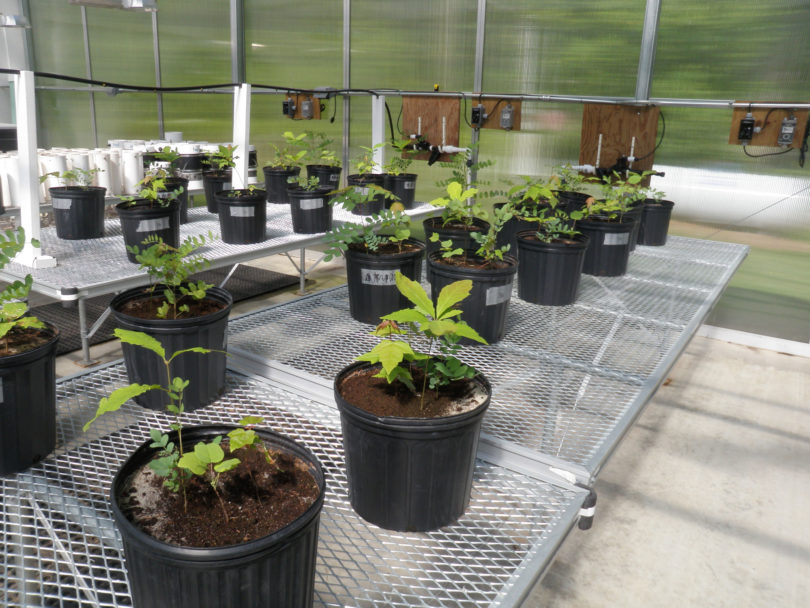 Athens, Ga. – Southeastern forests may look and function differently in the future as more frequent droughts and forest disturbances combine to affect which tree species thrive, according to a new study led by University of Georgia ecologist Nina Wurzburger.

The study’s findings, recently published in the journal Oecologia, suggest that certain tree species may gain a competitive advantage over others during droughts-not because they withstand the lack of water better, but because they are able to pull nitrogen, an essential nutrient, out of the air and convert it to a usable form.

Like people, trees need water and nutrients to survive. Different species have adapted different mechanisms to acquire nutrients, especially nitrogen. Most trees acquire it from the soil, while others can absorb it from the air-a process known as fixation-and convert it into a usable form. These nitrogen-fixing trees introduce much of a forest ecosystem’s nitrogen into the soil, and over time, other trees have access to it. As for water, some species have evolved leaf and sapwood traits that allow them to persist through drought periods, while others become vulnerable, wilt and die.

The Southeast has been experiencing more frequent and more intense summer droughts, a trend that scientists expect to continue in the 21st century. Furthermore, many Southeastern forests are managed for timber, biofuels or other forest products. They are harvested periodically, making for a patchwork landscape with forests in different stages of regrowth.

One of the most common trees to spring up after a disturbance such as timber harvesting is black locust. In some cases it can completely dominate a forest in its first decades of regrowth, but is eventually outcompeted by other species. Black locust is important from an ecosystem perspective because it is a nitrogen fixer.

Wurzburger, an assistant professor in the Odum School of Ecology at UGA, studies ecosystem biogeochemistry-how elements, such as nitrogen and carbon, and water move through the environment into plants, animals and back in a continuous loop.

“In the context of forest ecosystem development, the principal introduction of nitrogen occurs during early succession-the first stages of regrowth-through the process of fixation,” Wurzburger said. “So in a way, what happens during those first couple of decades will influence the ecosystem for many decades to come. This makes black locust incredibly important.”

Wurzburger wanted to learn more about how newly disturbed ecosystems would be affected by drought. In particular, she wondered how black locust would handle drought relative to its main competitors, species that have leaf or sapwood traits that allow them to persist through drought periods.

They set up 40 planters each containing four of the different tree seedlings and simulated summer heat and light conditions. They manipulated soil moisture so that half of the planters experienced drought and half did not.

After 22 weeks, they measured the growth rates and nutrient levels of the saplings-and found a surprise.

“We thought that drought would negatively affect black locust the most, due to its hydraulic architecture, or its sapwood traits,” Wurzburger said. “But we observed the very opposite: Drought seemed to improve the ability of black locust to fix nitrogen and compete with other species.”

Wurzburger said the findings point to the fundamental way that nitrogen and water cycles interact.

“A reduction in soil moisture also reduces the amount of nitrogen in soil,” she said, giving an advantage to a tree that can pull nitrogen from the atmosphere.

“While the other species have to cope with the stress of low soil moisture and low nitrogen, black locust only has to deal with the lack of water,” she said.

The study has suggested a new conceptual framework for understanding how drought may influence forests, Wurzburger said.

“We think there must be a threshold at which drought exceeds the limit of physiological tolerance for black locust,” she said. “And at that point, there will be a critical effect on the ecosystem because fixation will be suppressed or reduced. But moderate drought, on the other hand, may actually increase fixation.”

Disturbed forests in the early stages of forest regrowth could be more resilient to droughts than previously thought, which could determine the services-such as carbon sequestration, water quality and quantity improvement, and wildlife habitat-that these forests provide in the future, Wurzburger said.

The study has inspired a whole set of new questions that Wurzburger, Miniat and graduate students are now testing in a recently harvested southern Appalachian forest.

“Now that we have this conceptual framework, we want to know how black locust will compete relative to other species and how its ability to fix nitrogen will be changed by different drought intensities in a more natural setting,” Wurzburger said.