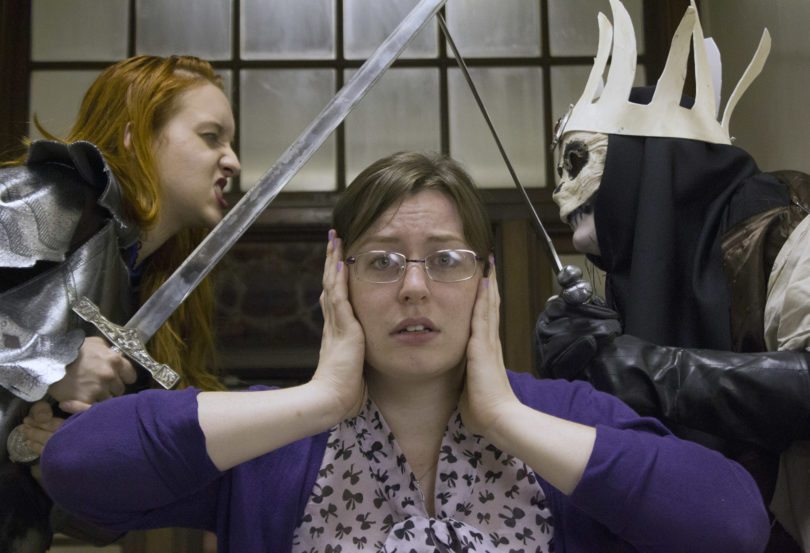 The Town & Gown Players will present SHE KILLS MONSTERS April 25-27. The scene above shows

A plethora of UGA faculty, staff and alumni will be in front or behind the curtain during The Town & Gown Players presentation of the fun, fantasy-filled comic adventure SHE KILLS MONSTERS. The play, written by Qui Nguyen, will be presented April 25-27.

In SHE KILLS MONSTERS, Average Agnes goes on an epic quest to connect to her outcast, Dungeons & Dragons obsessed sister Tilly by grabbing a sword and rolling the dice.

Director W. Steven Carroll, who received a bachelor’s degree in theatre and film studies from UGA in 2008, is a lifelong comic book and movie fan plus an avid tabletop roleplayer who refers to SHE KILLS MONSTERS as “a nerdgasm on stage, gleefully celebrating the emergence of geek chic with a nonstop barrage of movie, TV, video game and ’90s pop culture references.”

The play also explores resonant themes of love, identity and acceptance through characters that, according to Carroll, “are more true-to-life than they might seem on the surface. An earnest message lurks beneath the show’s silly veneer of multi-eyed monsters, furry fiends and dancing demons.”

SHE KILLS MONSTERS will be performed at the Athens Community Theatre, 115 Grady Ave. Curtain times for the shows are 8 p.m. April 25-26 and 2 p.m. on April 27. All seats are $5. Season ticket holders will be admitted free.

More information on the show is at townandgownplayers.org.