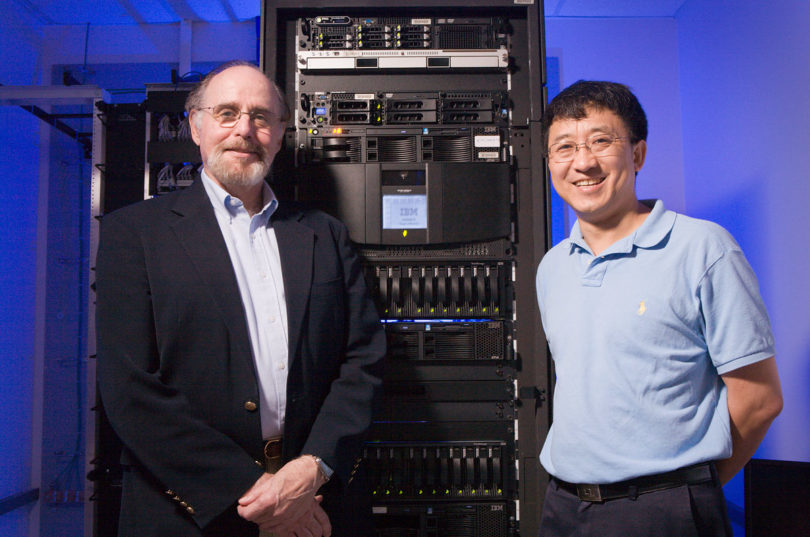 Most parts of living organisms come packaged with proteins-chains of amino acids that must fold into three-dimensional structures to work. But when the proteins fold incorrectly in humans, bad things can happen and disorders including Alzheimer’s and Parkinson’s diseases can result.

Scientists have tried to understand what makes proteins fold into functional units and why it happens, and several breakthroughs have occurred through computer modeling.

Scientists at UGA have created a two-step computer simulation (using a process called the Wang-Landau algorithm) that sheds light on how a crucial protein-glycophorin A-becomes an active part of living cells. The use of Wang-Landau could lead to a better understanding of the controlling mechanisms behind protein folding.

“Our goal is to present the methodology in a clear, self-consistent way, accessible to any scientist with knowledge of Monte Carlo simulations,” said David Landau, Distinguished Research Professor of Physics and director of the Center for Simulational Physics.

The research was published in The Journal of Chemical Physics. Authors of the paper are Clare Gervais and Thomas Wüst, formerly of UGA and now employed in Switzerland; Landau and Ying Xu, Regents-Georgia Research Alliance Eminent Scholar and professor of bioinformatics and computational biology, also at UGA. The research was supported by grants from the National Institutes of Health and the National Science Foundation. Landau and Xu are in UGA’s Franklin College of Arts and Sciences.

“This work demonstrates the power and potential of combining expertise from computational physics and computational biology in solving challenging biological problems,” Xu said.

Monte Carlo simulations, the use of algorithms with repeated random samplings to produce predictions, are useful for complex problems. They are able to give scientists startlingly accurate predictions of how biological processes work.

The team developed a two-step Monte Carlo procedure to investigate, for glycophorin A (GpA), a biochemical process called dimerization. (A dimer in biology or chemistry consists of two structurally similar units that are held together by intra- or intermolecular forces).

“One particularly promising approach is to investigate the thermodynamics of protein folding through examining the energy landscape,” Landau said. “By doing this, we can learn about the characteristics of proteins including possible folding pathways and folding intermediates. Thus, it allows us to bridge the gap between statistical and experimental results.”

Unfortunately, so much is happening physically and biochemically as proteins fold into their functional shapes that the problems must be broken down one by one to be studied. Using the computer simulation, the first step in studying the dimerization process was to estimate native states in GpA using Wang-Landau. The next was to sample energy and structural “observables” to provide insights into the thermodynamics of the system.

The results can be applied to many fields of protein-folding studies. GpA is a 131-amino acid protein that spans the human red-blood cell membrane and is crucial in cell procedures. It also serves as an important model system for similar systems. The new simulation may open other doors.

“The main advantage of this two-step approach lies in its flexibility as well as its generality,” said Landau.