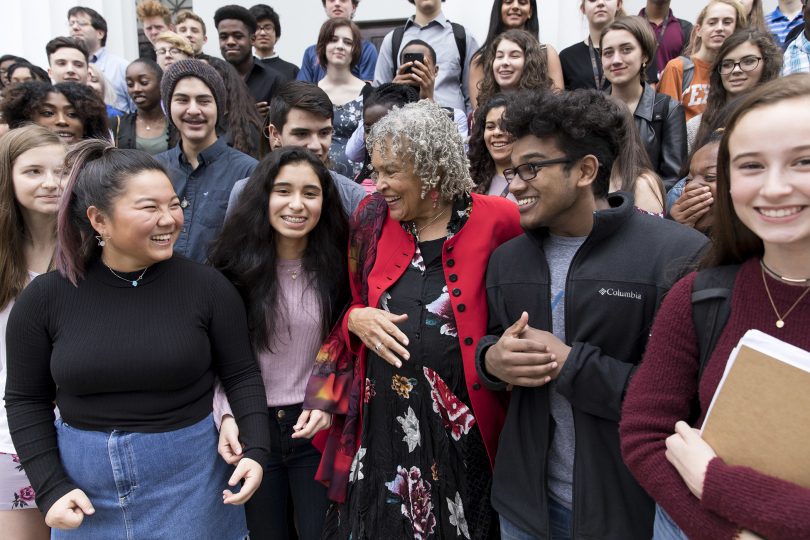 Charlayne Hunter-Gault meets with a group of local high school students from Cedar Shoals and Clarke Central outside of the Chapel before delivering the Holmes-Hunter Lecture in 2018. (Photo taken by Andrew Davis Tucker/UGA)

President Jere W. Morehead has directed $25,000 in private discretionary funds to Giving Voice to the Voiceless, an endowment launched by distinguished journalist, author and UGA alumna Charlayne Hunter-Gault and her husband, Ronald Gault.

The new investment of funds will expand a program designed to support and inspire students from across the university to engage in projects that shed light on unattended societal problems and marginalized communities.

“Charlayne and Ron have shown their commitment to the University of Georgia and to amplifying the work of our students through the Giving Voice to the Voiceless fund,” said Morehead. “I hope that this gift inspires others to contribute to this impactful endowment.”

Established in 2018, the Giving Voice to the Voiceless fund is designed to help students amplify the experiences of marginalized communities and to advance social justice, global understanding and human good through creative endeavors.  Grants from the fund aid students in seeking out and participating in innovative research projects, internships, study abroad experiences and field studies.

Administered by the Grady College of Journalism and Mass Communication, the Giving Voice to the Voiceless program issues a call for proposals each fall and supports projects that illuminate underserved and underrepresented communities, topics and stories. The program has already catalyzed a range of innovative projects since grants were first issued in January 2019, including the UGA Black Alumni Oral History project, which interviewed and archived the reflections of many of UGA’s first Black students.

“I greatly appreciate President Morehead for his continued support of the Giving Voice to the Voiceless fund and the strides he is taking to promote a more welcoming and diverse campus at the University of Georgia,” said Hunter-Gault. “The young people this fund supports have all of the tools to be successful, and I hope the contributions they receive from GVV propel them to share their talents with the world as they tell amazing stories that will benefit people who otherwise, would have no voice.”

After graduating from UGA in 1963, Hunter-Gault worked as a staff writer for The New Yorker and as news anchor for the NBC affiliate in Washington, D.C., before reporting for The New York Times, PBS, NPR and CNN.  During her career, she received numerous awards, including two National News and Documentary Emmy Awards and two Peabody Awards.

Throughout this year, UGA is celebrating the 60th anniversary of the remarkable courage and determination of Hamilton Holmes and Charlayne Hunter-Gault, who became the first Black students to enroll at UGA in January 1961. A series of special events was launched on Jan. 9 and will continue throughout 2021. This year in honor of the 60th, Charlayne and Ron have made yet another contribution to the fund.