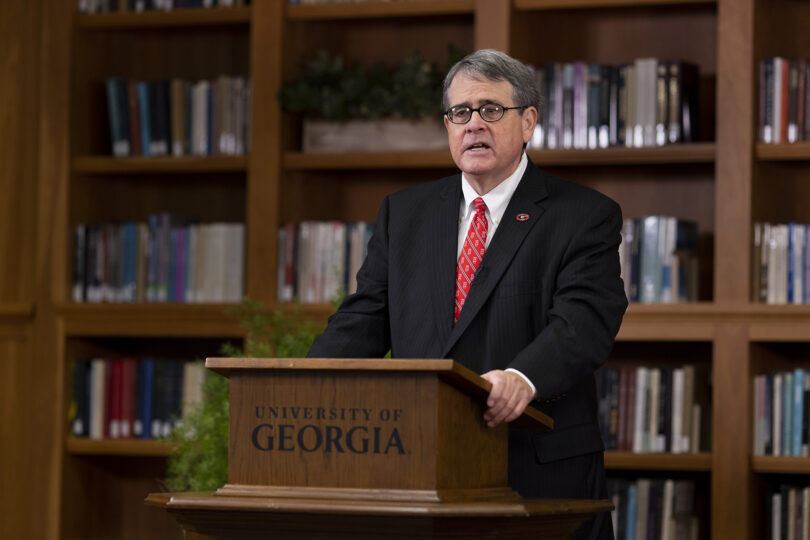 University of Georgia President Jere W. Morehead delivered the annual State of the University address Wednesday, reflecting on the challenges and achievements of a very difficult 2020 and delivering a message of hope and optimism for the future.

“In my nearly 35 years at this institution, we have never confronted a set of circumstances as broadly complex and demanding as those of the past year. This difficult chapter in the story of our university has revealed the very best of who we are. Our perseverance. Our resilience and resolve. Our determination to lift up individuals and communities – even in the midst of a global pandemic,” Morehead said.

Spaces were marked off for social distancing; HVAC systems were updated. The Athletic Association implemented rigorous plans and protocols so that student-athletes could safely resume competition. A robust surveillance testing program was built from the ground up, and the groundwork was laid to begin distributing vaccines to the campus community.

“By working together, the UGA community accomplished something many thought was inconceivable during the summer months: a productive and successful fall semester,” said Morehead.

The year had many successes despite the significant challenges, Morehead said.

The four-year completion rate rose to a record 71%, while the six-year completion rate held strong at 87%, exceeding the averages of the university’s peers and aspirants. US News and World Report ranked the University of Georgia No. 15 among the nation’s best public universities, marking UGA’s fifth consecutive year in the top 20. In addition, last year saw the selection of UGA’s 25th Rhodes Scholar, 61st Goldwater Scholar and sixth Schwarzman Scholar.

Research and development expenditures hit an all-time high for the university, topping $495 million in FY20, a 41% increase since 2013. Moreover, the university was ranked No. 2 nationally for bringing research-based products to market. To date, UGA has helped to generate more than 800 commercial products and now ranks 10th in the United States for “innovation impact.”  Earlier in 2021, the new Innovation Hub opened at the corner of Spring and South streets as the next phase in the Innovation District initiative.

Other milestones of FY20 include completing the most successful fundraising campaign in the university’s history, with over 175,000 donors contributing $1.45 billion, surpassing the campaign’s original $1.2 billion goal 16 months ahead of schedule. Through the campaign, alumni and friends created more than 3,600 new scholarships, nearly 100 endowed faculty positions, and helped to build 900,000 square feet of new learning and activity space on campus.

A renewed dedication to building diversity and inclusion

In July, Morehead announced the formation of a Presidential Task Force on Race, Ethnicity, and Community, dedicating $1 million to this effort. He also created a planning committee to develop five-year diversity and inclusive excellence plan for the university.

Meanwhile, throughout this year, UGA celebrates the 60th anniversary of the remarkable courage and determination of Hamilton Holmes and Charlayne Hunter-Gault, who became the first Black students to enroll at UGA in January 1961. Mary Frances Early enrolled as a graduate student later that year. A series of special events was launched Jan. 9 and will continue throughout 2021.

“Diversity and inclusion are—and will always be—central to our academic community, and these values will continue to be a priority for me and my administration,” Morehead said.

A message of hope and optimism

Morehead also emphasized the importance of collaboration and collegiality in addressing the pressing issues facing the university. “By working together constructively, we can accomplish so much more,” Morehead said.

He also looked with a hopeful eye toward the year ahead.

“Our struggle against COVID-19 will, one day, be over. The day will come when we emerge from the pandemic; when our Tate Center is bustling again with student activity; when the desks in our classrooms are no longer six feet apart; when virtual meetings are the exception, not the rule; when the Performing Arts Center has a full house and Sanford Stadium is filled with over 90,000 screaming fans.

Morehead ended his speech by thanking the UGA community.