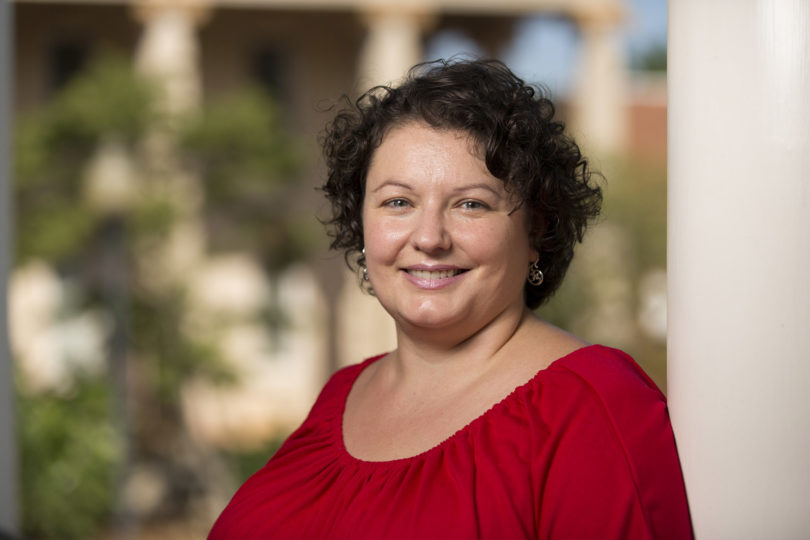 Trina Salm Ward is a faculty member in UGA’s School of Social Work and its College of Public Health.

Bed sharing, a practice where mother and infant sleep on the same surface, remains popular all over the world despite potential health risks for the infant. According to a new UGA study, bed sharing likely can be decreased if public health officials tailor their messaging to their unique population.

Trina Salm Ward, an assistant professor in the School of Social Work and an assistant professor of health promotion and behavior in the College of Public Health, reviewed literature on bed sharing in “Reasons for Mother-Infant Bed-Sharing: A Systematic Narrative” in the Maternal and Child Health Journal, published online ahead of the January/February print issue.

The biggest risk of bed sharing is sudden infant death syndrome, the third leading cause of infant mortality in the U.S.

In her research, Salm Ward discovered the main reasons mothers chose to bed share included breast-feeding, emotional comfort and reassurance, monitoring, better sleep for infant, family traditions and bonding. Since mothers elect to bed share for a variety of reasons, Salm Ward suggests that the issue is more complex than it originally was thought.

“The American Academy of Pediatrics recommends mothers simply not bed share with their infant,” Salm Ward said. “However we’ve found that the ‘Just don’t do it’ messaging isn’t helpful and that scare tactics don’t necessarily work. Instead we need to look into harm-reduction techniques.”

For Salm Ward, this means not stigmatizing and alienating mothers who continue to bed share. Instead she suggests a variety of options for mothers who may not be able to give the practice up. This could be because of socio-economic reasons, like not being able to afford a crib. Although bed sharing isn’t recommended, Salm Ward said that mothers should know about infant sleeping suggestions.

“Infants should be sleeping in the supine position on their backs,” Salm Ward said. “They should never be face down since they can’t lift their heads. They should also be on a firm surface without any pillows or blankets.”

Although the AAP discourages bed sharing, it recommends co-sleeping for mothers and infants.

“Co-sleeping and bed sharing are used interchangeably although they aren’t the same,” Salm Ward said. “Co-sleeping means sleeping in the same room as your infant in close proximity. Bed sharing is when you actually sleep on the same surface as the baby. Co-sleeping is the preferred option over bed sharing.”

If mothers still choose to bed share, Salm Ward recommends that no other family members sleep beside the infant. Factors like the presence of other family members, tobacco use in the family, sofa and armchair bed sharing and soft bedding increase the risk of SIDS.

Salm Ward believes that, in most cases, socio-economic concerns influence the mothers in their decision to bed share. To educate the population about safe sleep, Salm Ward suggests a number of community-wide steps.

“Mothers can first go to their health care providers and learn about the dangers of bed sharing,” she said. “First responders and public health officials can also provide support by doing safe-sleep campaigns, radio ads or lectures, depending on the community’s needs. The goal is to offer personalized options to mothers who may not be ready to stop bed sharing.”