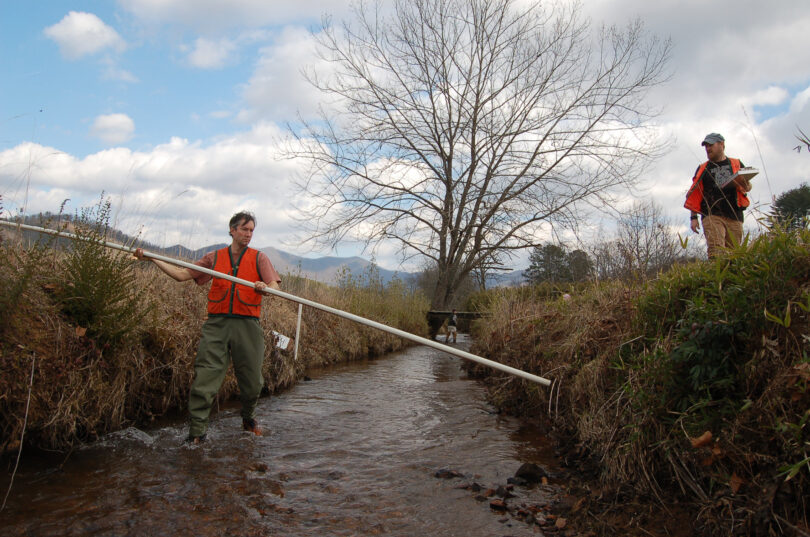 Mountain spring water is often touted as the cleanest water you can drink. But a new study from the University of Georgia revealed this isn’t the case.

Using data collected over 40 years, researchers detailed how water quality in high-elevation streams has been negatively affected by a combination of historical events and modern changes, namely sediment from rural roads and agricultural runoff.

Unpaved roads are just one of several factors contributing to sediment runoff, said Rhett Jackson, a professor at UGA’s Warnell School of Forestry and Natural Resources and the paper’s lead author.

The paper was published earlier this fall in the journal Bioscience.

“We had access to studies from 1976 to last year that encompassed both stream and terrestrial studies,” said Jackson, who worked with researchers from Virginia Tech, the University of Illinois, the University of Minnesota and the U.S. Forest Service to analyze streams in a mountainous portion of North Carolina adjacent to the Coweeta Long-Term Ecological Research Site.

When streams carry a lot of sediment, it makes it more difficult for animals to see food in the water, and it affects fish growth and disease resistance. Sediment also continues to flow downstream and into public water supplies, where it costs cities and towns more to filter.

The cost of a view

“The landscape you see now isn’t what it was like in 1900—the early settlers logged everything,” said Jackson. For generations, native Cherokee Indians farmed the valleys of the Southern Appalachians and left the hillsides forested, for hunting and gathering. But the new settlers cut the forests and even tried to farm the hills, causing erosion and sediment to move into the streams. Today, stream beds continue to show evidence of sediment deposited more than a century ago, even as new sediment pushes through the waters.

Many years later, a new kind of development in the region created a different kind of land disturbance. For generations, residents considered the steep mountain slopes undevelopable. But the 1980s and ’90s brought a desire for mountain getaway homes with views.

By building homes on mountain ridges, he said, it created more land disturbance through carving out unpaved roads and cutting into hillsides, sometimes creating landslides.

“Roadside ditches and unpaved roads produce a lot of sediment, and their sediment production increases as roads get steeper and as gravel roads get more use,” said Jackson.

A typical southern Appalachian forest stream contains sediment amounts—calculated as total suspended solid concentration—of about 8 to 10 milligrams per liter. But in areas with both mountain and valley development, the researchers found sediment concentrations four to six times higher.

Farming also takes its toll. The studies researchers analyzed found many streams in the area to have high nutrient concentrations—particularly nitrate. When a stream flowing through a pasture loses its buffer of trees, it loses a natural protection against nutrient runoff.

Streams without shade also have higher water temperatures. In Appalachia, where mountain trout and other wildlife thrive in cold waters, even a few extra degrees in the summer can kill trout or reduce their competitiveness against warm water fish.

Jackson said about 40% of streams in the study area aren’t buffered. But through best-management practices and state and federal programs, landowners can find assistance and resources to reverse the damage. “On small streams, the actions of individual landowners matter a lot,” he said. “Sometimes, we see unusual streamside activities with substantial water quality effects.” For example, researchers found instances of streams diverted through animal enclosures or illicit discharge pipes without clear sources.

Even small steps, such as buffering runoff from a gravel road or planting trees near an open stream, can go a long way, Jackson said.

“Because the water in streams comes from the whole landscape, everything we see on the land has some effect on streams,” he said. “But streams are resilient, and as long as we intelligently modify our actions a little bit, we can farm and live near streams while protecting their water quality. Maintaining the quality of our landscape requires a little thought and work on our parts.”