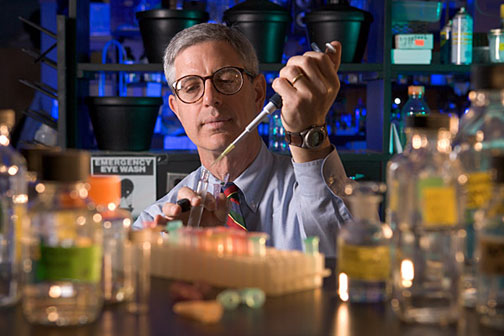 Marcus Fechheimer and his lab have been at the center of research on Hirano bodies for nearly a decade.

Hirano bodies are almost indescribably tiny objects found in nerve cells of people suffering from conditions such as Alzheimer’s, mad cow and Lou Gehrig’s diseases. Yet for decades, researchers weren’t sure if these structures helped cause the conditions or appeared after onset of the disease and had some other role.

Now, in research at UGA, a cellular biologist and his colleagues have found that Hirano bodies may play a protective role in the progression of neurodegenerative diseases such as Alzheimer’s. And to find out why this may be happening, they have developed the first transgenic mouse model that has Hirano bodies, which will open new frontiers on how these poorly understood structures may be ­involved with some of humankind’s most difficult-to-treat diseases.

“This work gives us a first view of the possible effects of Hirano bodies,” said Marcus Fechheimer, Josiah Meigs Professor of Cellular Biology. “Now we know that Hirano bodies do not kill cells and are not toxic to mice. This new model will allow us to ask whether Hirano bodies have any effect on progression of disease in the brain.”

While the research offers no cure for diseases such as Lou Gehrig’s and mad cow, it does create a new area of research into understanding how these diseases operate and why they are difficult to treat. And the problem is vast: the Alzheimer’s Association reports there are 5.4 million sufferers of that disease in the U.S.

The latest research announcing the transgenic mouse model for the formation of Hirano bodies was just published in the journal BMC Neuroscience. Co-authors with Fechheimer include Ruth Furukawa in the Fechheimer lab at UGA as well as John Wagner and Michael Stramiello of the College of Veterinary Medicine and Sangdeuk Ha, formerly of UGA and now with Beth Israel Deaconess Medical Center at the Harvard Medical School.

Researchers actually discovered Hirano bodies decades ago but studying them in the lab proved so difficult that all the medical community could say was that the bodies were in some way associated with diseases such as Alzheimer’s. It was clear that Hirano bodies are composed primarily of filaments of actin, a protein that participates in many important cellular processes. But no one understood their function.

Fechheimer’s lab has been at the center of research on Hirano bodies for nearly a decade. In 2002, it reported for the first time a method of inducing the bodies to form.  Interestingly, these “inclusions” also show up in autopsies of people suffering from diabetes, alcoholism and cancer. Hirano bodies also are associated with normal aging. So understanding what they do when neurological processes go off the rails could add an important step in understanding how diseases that cause so much suffering progress.

In a companion paper to the new mouse model research, published this year in the journal Neurobiology of Aging, Fechheimer and his co-authors discovered that Hirano bodies may actually act as a “corral” into which more damaging cellular molecules are “rounded up,” thus actually promoting cell survival and possibly even slowing the impact of disease. The idea that Hirano bodies actually may help protect cells from such disorders as Alzheimer’s came as a surprise to the team, though much research remains to be done to make sure exactly what is happening. Co-authors on the paper in Neurobiology of Aging were Furukawa and Ha.