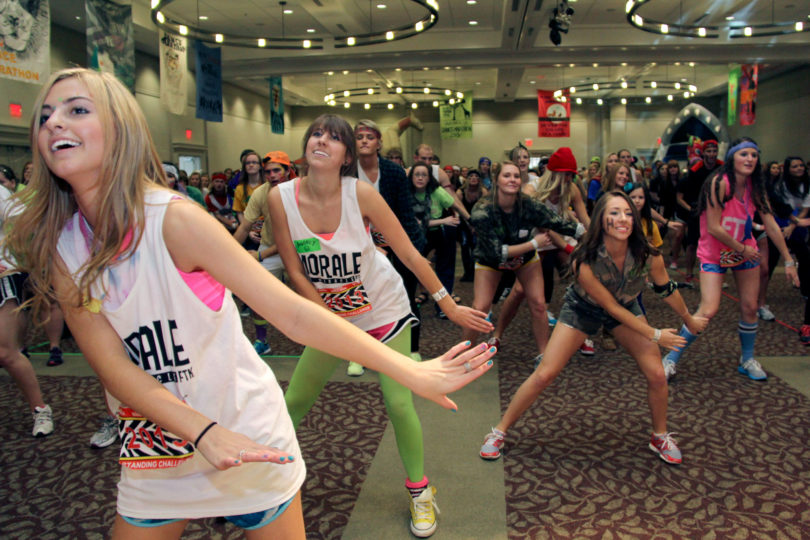 For 24 straight hours, the Grand Hall of the Tate Student Center turned into a boisterous, inspiring dance party as UGA Miracle held its 18th annual Dance Marathon on Feb. 23-24.

The ambitious event is the signature fundraiser for UGA Miracle, an entirely student-run philanthropic organization. Roughly 1,500 people, many dressed in brightly colored outfits, participated in the 24-hour event, raising money that goes toward the care of children treated in the rehabilitation and orthopedics departments through the Children’s Healthcare of Atlanta system.

Throughout the 24-hour event, participants learned student-­choreographed group dance numbers to tunes like Whitney Houston’s “I Wanna Dance With Somebody” and Hall and Oates’ “You Make My Dreams Come True.” There were also performances by campus music and dance groups, including a performance by the Redcoat Marching Band.

While music and dancing drew many students to the event, a key part of the marathon is reminding the participants just what the dancing is all about. Throughout the day, the music stopped so children who have benefited from Children’s Healthcare of Atlanta-called the Miracle children-and their families could tell their stories of illness and recovery.

One of those children was 2-year-old Abby Seagraves, daughter of Beau Seagraves, the assistant dean for the Tate Student Center. Abby was born with serious heart conditions that required open-heart surgery. While Abby is healthier now, her father said that his family was very fortunate to have the resources offered by Children’s Healthcare of Atlanta.

He thanked the students for their participation in helping Abby and other children get the care they need.

“What you do here today matters,” Beau Seagraves told the students and encouraged them to continue their involvement in philanthropic activities in the future. “I hope you continue to dance for the rest of your lives.”

While organizers put in grueling hours to prepare for the event, about 200 students made a unique commitment to aid the cause by staying on their feet throughout the entire marathon. Dubbed the “Standing Challenge,” the commitment was a symbolic gesture of standing up for the children treated through the fundraising effort. Some of those children have disabilities that make them unable to walk.

Virginia Van Ingen is a junior from Darion, Conn., who participated in the first standing challenge at last year’s dance marathon and decided do it again this year. She said the physical discomfort of remaining on her feet for 24 hours was worth it after a mother of one of the Miracle children thanked her last year.

The dozens of stories from the children this year, she said, would sustain her again.

“Hearing those stories and how it affects them,” said Van Ingen, “makes a huge difference.”