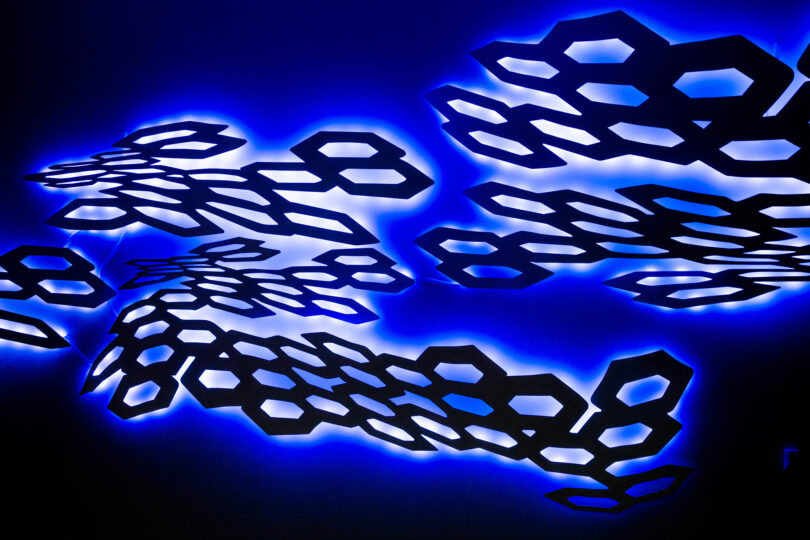 Detail of "Shimmer." Photo by Jason Thrasher for the Willson Center for Humanities & Arts, University of Georgia.

Inspired by data, the sculpture "Shimmer" will remain at UGA

Since 2018, Rebecca Rutstein’s wall-mounted sculpture “Shimmer” has been greeting visitors to the Georgia Museum of Art at the University of Georgia. It was a popular selfie spot as well as a concrete example of how science and art can work together to reach new audiences, but the work didn’t belong to the museum’s collection until recently, when the museum’s Collectors group banded together to purchase it for the permanent collection.

The Collectors are a museum group focused on collecting, connoisseurship and assisting to build the museum’s permanent collection through acquisitions. Since its inception 20 years ago, the group has raised over $425,000 for acquisitions, enabling the purchase of 116 works of art for the permanent collection, including “Minnehaha,” a significant work by Edmonia Lewis, an American sculptor who was the first woman of African American and Native American heritage to achieve international fame and recognition as a sculptor in the fine arts world; “The Kitten,” by Thomas Waterman Wood, an American figure painter who was an esteemed member of the National Academy of Design; and an iconic pie server by William Spratling, an American-born silver designer and artist. In addition to supporting the mission of the museum, the Collectors are passionate about traveling to view works of art in private homes and museums locally, regionally and abroad.

Rather than holding its biennial event fundraiser this past spring, the group had already decided to focus on a campaign through mail and email to add Rutstein’s sculpture to the museum’s permanent collection. They launched the campaign at the end of 2019, before COVID-19 was on most radars, and concluded it in early April 2020.

“We are both excited and proud that the Collectors have faithfully stepped up to raise the money necessary to purchase ‘Shimmer’ for the museum’s permanent collection,” said David Matheny, chair of the Collectors. “I want to thank the campaign co-chairs, Cassie Bryant and Teresa Friedlander, for their outstanding work in pulling off the best ‘non-event’ event ever. And of course, we couldn’t have met our goal without lead gifts from Dudley Stevens and Judith Ellis, two of our most generous museum patrons. It never ceases to amaze me the number of supporters that give of their time and resources to make sure that the Georgia Museum of Art continues to serve the state of Georgia and the University of Georgia community with the best museum possible. We are truly fortunate to have so many patrons who care so much for the arts!”

Rutstein is both an award-winning artist and an ocean explorer. In 2018, she served as UGA’s Delta Visiting Chair for Global Understanding, embarking on a deep-sea expedition/artist’s residency with a team of scientists led by UGA’s Samantha Joye and the University of North Carolina’s Andreas Teske. While the scientists studied hydrothermal vents and the unique carbon-cycling processes occurring in Mexico’s Guaymas Basin in the Sea of Cortez, Rutstein set up her studio on the ship and created new works inspired by the data the group was collecting. 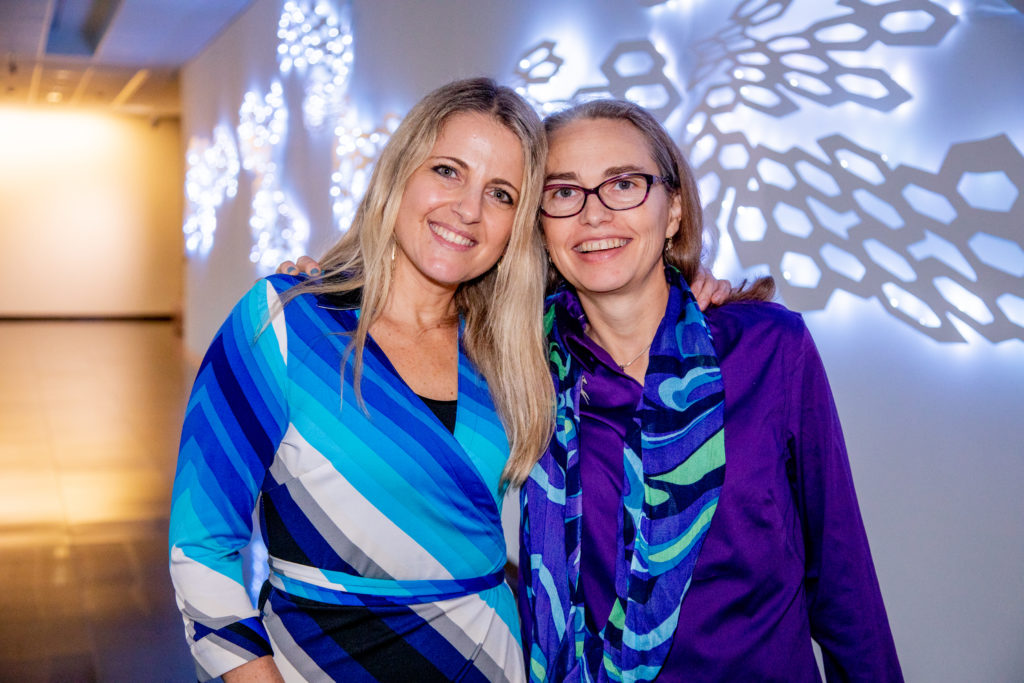 Rebecca Rutstein and Samantha Joye at the Georgia Museum of Art in front of Rutstein’s interactive sculptural installation. (Photo by Jason Thrasher)

“Shimmer” was commissioned as part of her tenure as Delta Visiting Chair; running for 64 feet, the steel sculpture contains hexagonal sculptural forms and reactive LED lights that create trails mimicking the movements of the viewer. Its forms were inspired by data Joye previously collected on the hydrocarbon structures and bioluminescence present in the Guaymas Basin.

The Delta Visiting Chair is an annual position established by UGA’s Willson Center for Humanities and Arts through the support of the Delta Air Lines Foundation that hosts outstanding global scholars, leading creative thinkers, artists and intellectuals who present global problems in local context, with a focus on how the arts and humanities can inform conversations on major contemporary issues.

Since earning her Master of Fine Arts degree from the University of Pennsylvania in 1997, Rutstein has extensively exhibited her paintings, installations, public art and sculptures throughout the United States. With works inspired by geology, microbiology and marine science, she has had more than 25 solo exhibitions at venues such as Sherry Leedy Contemporary Art (Kansas City, Missouri), the California Museum of Art Thousand Oaks, the John Hartell Gallery (Ithaca, New York), Zane Bennett Contemporary Art (Santa Fe, New Mexico) and the Bridgette Mayer Gallery (Philadelphia).

Rutstein’s additional awards include a Percent for Art Commission with Temple University, a Pew Fellowship in the Arts, an Independence Foundation Fellowship and a Pennsylvania Council on the Arts Grant. Her work has been featured on NPR and in the Wall Street Journal, Huffington Post, Vice Magazine and New American Paintings and can be found in public, private and corporate collections throughout the U.S.