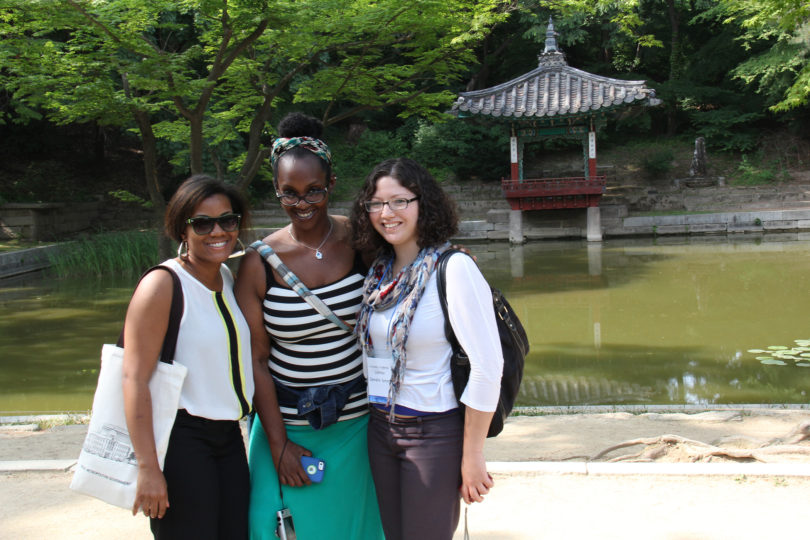 It is 7,120 miles across the Pacific Ocean from Athens, Georgia, to Seoul, South Korea. For the past five years, UGA students have traveled to Seoul to learn about local government in the capital and largest metropolis of South Korea. The most recent group of graduate and undergraduate students made the trip this past summer.

The UGA School of Public and International Affairs has a memorandum of understanding with the Seoul Metropolitan Government and the University of Seoul. Each year, eight to 10 UGA students join other students from other universities for “Case Study: Policy Management in Seoul.”

“This is very typical of how progressive Seoul is; they are using this arrangement as an opportunity to market the city globally to the future city and state managers,” said Rob Christensen, an associate professor of public administration in SPIA and the instructor for the 2014 case study in May. “Seoul is always interested in learning and is changing so quickly. This is just one of those touch points where it can both learn and share its own vision.”

As guests of the city of Seoul, students learn about policy from the political leaders charged with running the city of 10.5 million people. In eight days, the group participated in nine briefings and went on five field-visits exploring the unique challenges of a modern city with 7,000 years of history.

The case study is designed to promote a mutual exchange between visitors and the host institution. Students deliver policy or management recommendations to the Seoul Metropolitan Government, offering fresh perspectives for government leaders.

“UGA has one of the world’s best MPA programs, and that is recognized by Seoul,” Christensen said. “They want to have that relationship with us, and we are sending our best students to them. For us, it is a great way to sustain our visibility.”

Groups covered topics including finance, welfare, transportation, e-government, housing policy and city planning. Field visits introduced the group to both the historic treasures, like the Changdeok Palace, and modern marvels, like the city’s new Metro 9 rail that tracks trains in real time and zips passengers across the city in minutes.

“In this day and age, we are living in a global world with everyone connected so intricately,” said LaShana Lee, a recent MPA graduate who participated in the case study. “I took this opportunity to take an informative approach to public administration. We’ve seen some amazing things Seoul is doing. While not all of them would be practically applicable to our own countries, there are a lot of approaches they have taken to solving some of their challenges that I think could greatly benefit some American cities.”

“Seoul gets to hear the perceptions and insight from our best and brightest students,” Christensen said. “And, it also gives Seoul a chance to showcase what they have and it helps them with global competitiveness.”

“The Seoul case study gave me a chance to expand my professional and academic understanding, but also to learn practical applications that could be applied in Athens-Clarke County,” Valentine said. “Seeing what (Seoul Transport Operations and Information Service) is doing with transportation, Seoul’s aggressive park program, and really just seeing government at this scale, has been beneficial to me.”

“Many of our alumni interested in local government stay in Georgia, and I think it is important for our students to have exposure to other areas to have a different perceptive on policy,” said Christensen, who teaches courses in intergovernmental relations.

Sam Aguilar is a second-year MPA student studying local government. He hopes one day to serve as a city manager in Georgia.

“I really wanted to get a sense of what public administration and policy are like in other countries, and I know Seoul is a very advanced country both technologically and in their government,” Aguilar said. “I wanted this opportunity to see what they are doing, and then apply that to what I’m going to be doing in the future.”

Ben Brunjes is entering his third year as a doctoral student in public administration. For him, it was the comparative value that brought him to Seoul.

“This is an amazing opportunity to explore another culture and learn about public administration in a new way,” he said. “Comparatively, you can look at what is happening in the U.S. and in Georgia and what is happening in Seoul and South Korea. But also, it is just an incredible experience to see what is done in this country and to see how people take similar ideas and implement them in very different ways.”

For more information about the program, contact MPA director and graduate coordinator Deborah Carroll at dcarroll@uga.edu.