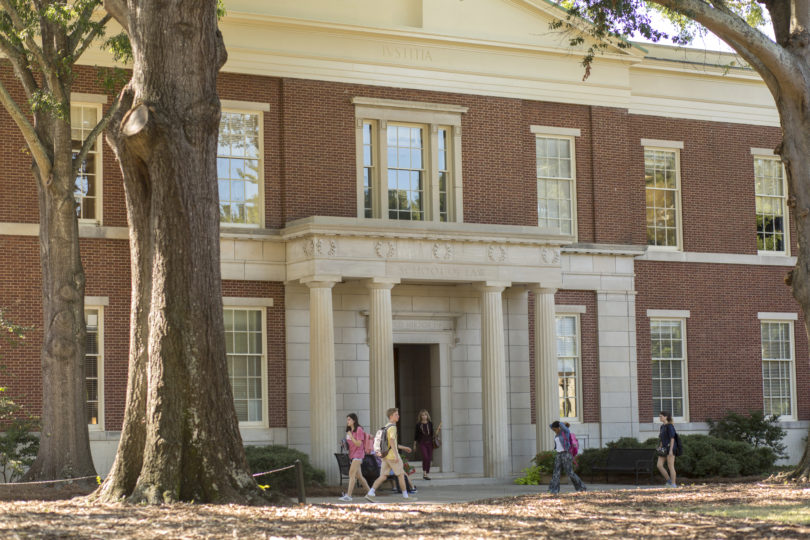 The University of Georgia School of Law recently captured the top trophy in the Charleston School of Law National Moot Court Competition and won a regional championship of the American Association for Justice National Student Trial Advocacy Competition, qualifying to compete in the national tier of this tournament. 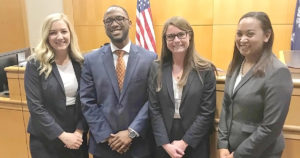 From left: Hayley Nicolich, Eric Wilder finished as semifinalists and were presented with the Best Appellee Brief Award. Caroline Savini and Simone Ford went undefeated at the Charleston moot court tournament, claiming the national title. Savini was named the best oralist of the final round.

Notably, three of the best five oralists in the preliminary rounds of this competition were from UGA: Wilder, Nicolich and Savini. Also, Georgia was the only school to advance two teams to the quarterfinals.

“I am so proud of these two teams,” School of Law Director of Advocacy Kellie Casey said. “They were outstanding. I really wish it could have been an all Georgia final, but instead the two teams met in the semifinals. They were both so well prepared as is evidenced by the oralist and brief awards. It was a strong tournament for Georgia.” 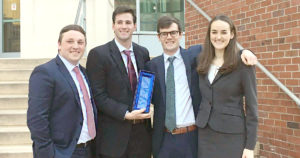 In the American Association for Justice National Student Trial Advocacy Competition, third-year law students J. Alex Prescott and Karen E. Hays and second-year law students Stephen Mulherin and Philip Poole finished in first place in their regional tournament. They were undefeated in the contest, overcoming teams such as Emory University, Georgia State University, Belmont University, the University of South Carolina and Lincoln Memorial University. They will now advance to the national tier of the tournament to be held in Raleigh, North Carolina, during April.

“This team is well positioned to represent UGA in the national round,” Casey said. “There will be 14 teams competing for the national championship next month, and I am confident their hard work and preparation will pay off.”

These successes demonstrate the law school’s commitment to preparing its students for real-world practice while connecting them to professionals and leaders in the legal community through a variety of different opportunities and events, according to law school Dean Peter B. “Bo” Rutledge.

UGA School of Law
Established in 1859, the School of Law is consistently regarded as one of the nation’s top law schools. The school is proud of its longstanding commitment to preparing the next generation of legal leaders and ensuring a strong return on investment for its three degrees – the Juris Doctor, the Master of Laws and the Master in the Study of Law. The school’s accomplished faculty includes nationally and internationally renowned scholars, and its more than 10,000 living graduates are leading figures in law, business and public service throughout the world. Connecting students to these thought leaders and opportunities to serve state and society is central to the school’s mission. For more information, see www.law.uga.edu.