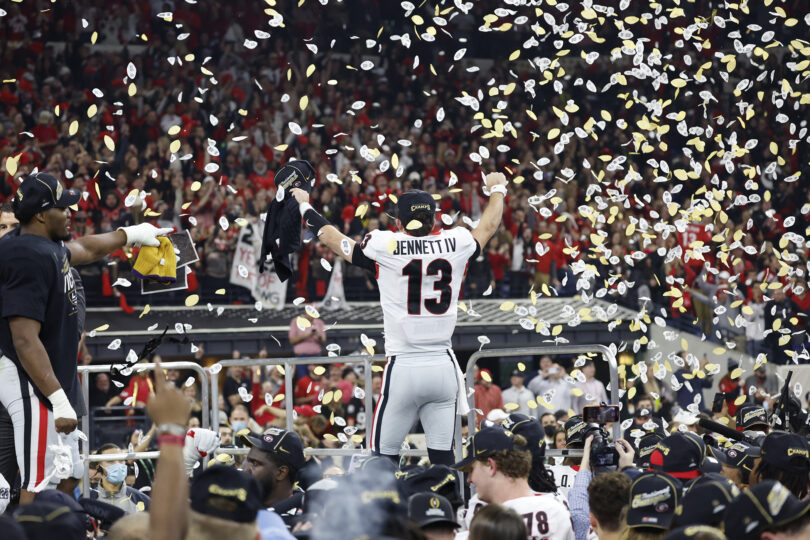 An eternity? Forever? A lifetime?

Pick your hyperbole and then throw it in the garbage can. You’ll never need it again.

The University of Georgia won its third national championship Monday night, Jan. 10—its first since 1980.

The final score was 33-18, but the game was not as easy as that result looks. Facing Alabama is never easy. But that just makes the victory so sweet and such a relief. And it really could not have been any other way. (See photo gallery.)

To become a national champion, Georgia head coach Kirby Smart had to vanquish his mentor, Alabama coach Nick Saban. Saban, the winner of seven national titles, defeated Smart the first four times they faced each other—most notably (and painfully) in the 2018 College Football Playoff National Championship game in Atlanta. Alabama’s 41-24 win over then-undefeated and No. 1-ranked Georgia in the 2021 Southeastern Conference championship game was the only matchup of the Smart-Saban era that wasn’t close.

And while that defeat knocked Georgia from the top of the polls and served as a shock to the system, it really didn’t derail the Bulldogs’ title hopes much. They had entered the SEC Championship as a cinch to advance to the College Football Playoff, and the loss did nothing to change that.

Going into the College Football Playoff Semifinal at the Orange Bowl as the No. 3 team in the country, an inspired Bulldog squad steamrolled No. 2 Michigan, 34-11. That win set up another showdown with No. 1 Alabama, which dispatched Cincinnati earlier in the day, 27-6.

Despite Alabama’s higher ranking and SEC title win, Georgia came into the CFP National Championship a slight favorite. But it was Alabama that took charge early, kicking a field goal on their first drive to take a 3-0 lead.

Fans of field goals had a lot to cheer about in the first half. The Crimson Tide kicked three of them as Georgia’s bend-but-don’t-break defense gave up a lot of yards but kept Alabama out of the end zone. Georgia’s Jack Podlesny kicked two of his own (from 25 yards and 49 yards) to account for all of the Bulldogs scoring and keep the game close at 9-6 at halftime.

And while field goals provided all of the highlights in the first half, a field goal attempt in the third quarter offered the game’s first true turning point. Georgia’s Jalen Carter blocked a Will Reichard 48-yard field goal attempt, and on the next play James Cook ran for 67 yards down to the Alabama 13-yard-line. Three plays later Zamir White scored from the 1, and Georgia had its first lead, 13-9. All of that was just a lead-in to one of the most exciting quarters of football in Georgia history.

Alabama kicked a quick field goal to cut the lead to 13-12, and on the third play of Georgia’s ensuing drive, disaster struck. What appeared to be an incomplete pass by Bennett was ruled a fumble with an Alabama recovery at the Georgia 16.

One minute and 21 seconds later, the Tide scored their first touchdown of the game. They missed the two-point conversion, but the suddenness change of momentum combined with the symbolism of Alabama’s past wins had the potential of wiping Georgia out.

In just five plays, Georgia marched down the field and Bennett capped this incredible counterpunch with his best throw of the day, which landed in the hands of A.D. Mitchell for a 40-yard touchdown. The Bulldogs in the stands erupted, Georgia led 19-18, and would not trail again.

In fact, Georgia dominated. After an Alabama three-and-out, the Bulldogs scored again to make it 26-18, and Alabama’s final drive ended in a Kelee Ringo 79-yard pick-six. Final score 33-18, cue the confetti.

“There’s gonna be some property torn up in Indy tonight!” Smart called from the podium, paraphrasing the immortal Larry Munson’s Lindsey Scott touchdown call against Florida that saved what would be an undefeated season for the 1980 Bulldogs.

In actuality, Indiana’s capital city did not have anything to fear from the tens of thousands of Georgia fans in town, although they partied in the chilly streets until the middle of the night. The good-naturedness of the Bulldog faithful was on display all weekend.

The first cold-weather city to host the College Football Playoff championship, Indianapolis proved more than up to the task. While many of Georgia’s (and Alabama’s) fans may not have been used to temperatures that stayed below freezing more often than not, they bundled up and attended concerts and pep rallies, gathered on outdoor patios and joyously cruised one of the main pedestrian thoroughfares connecting the festivities—the aptly named Georgia Street.

The story of Georgia’s 2021 National Championship team has only just begun being told, but in a lot of ways, this squad might be the university’s most impressive ever. They may not have an individual star like 1942 Heisman winner Frank Sinkwich, but the success of these Bulldogs is truly a team effort.

The undefeated 1980 team is legendary for good reason. But the 2021 Bulldogs’ 14-1 record is at least as impressive. To win a title in the modern game is incredibly difficult. Since the start of the College Football Playoff era in 2014, just three national champions have finished undefeated. The Bulldog beat seven ranked teams on the way to their national title, including three of them (Clemson, Michigan and Alabama) in the top three.

And, yes, Kirby Smart beat Nick Saban, the greatest coach in the history of college football. But, in the end, that’s not what Smart, coach of the national champion Georgia Bulldogs, wanted to talk about.

“I told the guys in the locker room, just take a picture of this, because I think back to the ’80 championship and all these people who have reached out,” he said. “Our guys have accomplished that, something special, and as they say, they’ve become legendary, and I want that for them.”