Researchers at the University of Georgia’s Regenerative Bioscience Center and their colleagues have found that “natural killer” white blood cells could guard against the cascade of cellular changes that lead to Parkinson’s disease and help stop its progression.

Natural killer (NK) cells are white blood cells that can kill tumors without being “told” from the body to do so. NK cells provide the first line of defense against invasion or a virus and are equipped with activating receptors that can sense cellular stress and identify cells that have been altered due to infection.

“Right now there’s no available therapy to modify or stop the progression of Parkinson’s,” said lead author Jae-Kyung “Jamise” Lee, assistant professor in UGA’s College of Veterinary Medicine. “This would be the first NK study to show the possibility of actually stopping the disease.”

Appearing in the current issue of Proceedings of the National Academy of Sciences, the new study highlights that NK cells act not only as efficient scavengers that attack an intruder but may be critical for regulating and restraining inflammation of brain tissue and protein clumping—hallmarks of Parkinson’s and other neurodegenerative disorders. The report also found that NK cell depletion in a mouse model significantly exaggerated the disease condition.  This led to the discovery that, without NK cells, the nervous system was left vulnerable to attack. 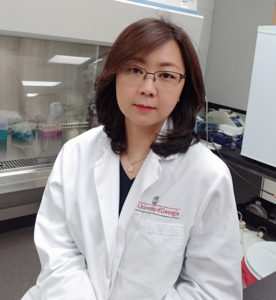 “We believe that NK cells exert protection by their ability to reduce inflammation in the brain and clear proteins that misfold and create toxic clumps,” Lee said. “In their absence, proteins were left unchecked, and we saw a substantial decrease in viral resistant cells, confirming that NK cells are a major source of signaling proteins that boost the immune system response.”

Thirty years ago, when research into immunotherapies got started, a logical first step in developing such therapies—to fight cancer, for example—was to train the immune system to recognize and attack tumor cells. Today, this idea has successfully moved from lab to clinic: New immunotherapies for melanoma, lung cancer and kidney cancer were recently approved by the U.S. Food and Drug Administration.

Lee is quick to caution that her Parkinson’s work was done in animal models, but she is optimistic about future immunotherapy discoveries. She cited recent human trials that tested immunotherapies against an aggressive form of brain cancer called glioblastoma, indicating that NK cells contribute to elimination of tumor cells and release messages in support of defense of the immune system.

Parkinson’s is no longer considered a brain-specific disease, and researchers increasingly recognize a functional connection between the immune system and central nervous system. Lee’s team found that, in conditions of chronic inflammation such as Parkinson’s, the blood-brain barrier becomes disrupted, allowing immune cells to channel into the brain.

“Understanding how the periphery signals for NKs to patrol for infectious agents, even in the absence of disease, could lead to breakthrough treatments for Parkinson’s disease,” Lee said.

Collaborating with Lee on this study is Levi Wood, an assistant professor in Georgia Tech’s School of Mechanical Engineering. The initial partnership between the researchers began with seed funding from the Regenerative Engineering and Medicine (REM) network, a joint collaboration between Emory University, Georgia Tech and UGA. As a REM awardee, Lee leveraged her seed funding into significant support from other groups, including the largest funder of Parkinson’s disease in the world, the Michael J. Fox Foundation.

UGA’s co-director for REM is Steven Stice, who also is director of the RBC.

“REM’s support for high-risk research has provided Dr. Lee the opportunity to rapidly produce some surprising discoveries with tangible results, leveraging the capabilities of a world-renowned, private-sector partner,” said Stice, a Georgia Research Alliance Eminent Scholar in the College of Agricultural and Environmental Sciences. “We are proud to continue to support early-career faculty with bold ideas and big impacts that are solving problems that save lives.”

Initially, the researchers have focused on the neuroprotective effects of NK cells. The next step is to study how NK cell functions are impaired by aging.

“Our preliminary data suggest that the number and function of NK cells are decreased in aged animals, and display impaired ability to perform their normal functions,” Lee said. “We would like to look deeper at age-related changes associated with NK cell biology and the wider implications for the health and well-being of older adults.”

In January, Georgia Gov. Brian Kemp announced that UGA will launch a professorship in honor of former Sen. Johnny Isakson to help develop treatments for Parkinson’s—the same disease that forced the senator to retire from public service. In 2017, Isakson received the Fox Foundation’s Parkinson’s Advocacy Award for his work to improve the lives of people living with the disease and for his advocacy in funding new treatments.

“We are excited to be part of UGA’s community research interest in Parkinson’s and their continued commitment to search for better treatments and a cure,” said Lee.