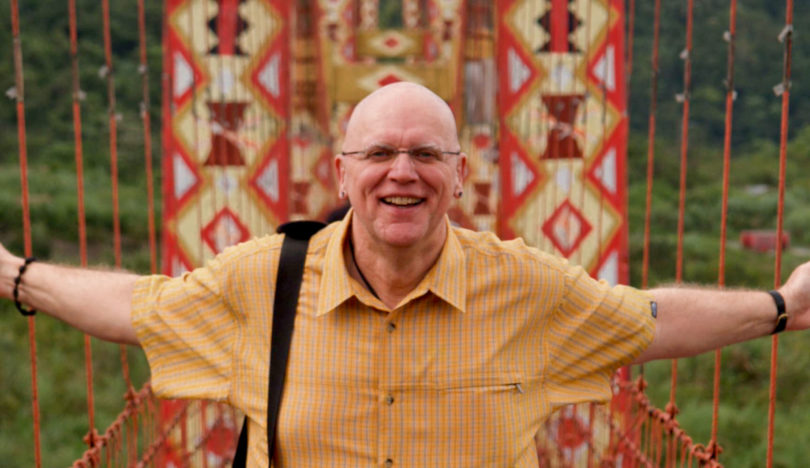 When he was a boy, Robert Hill developed a strong passion for collecting traditional art and reading about native peoples. Now, he is using that passion to help preserve the craft of pottery making for a region of the Navajo Nation.

An associate professor of adult education, Hill has been a student of traditional art his entire life. During the mid-1970s, he spent a year in Brazil as a botanical explorer. There he became acquainted with cultural anthropology and aboriginal societies.

Early in his analysis of literature on folk art and self-directed learning, Hill unearthed the tome Southern Arizona Folk Arts by James Griffith. The book laments the loss of the folk pottery tradition in the Tohono O’odham, a tribe formerly known as the Papago.

In 2000, Hill visited the Tohono O’odham Nation in hopes that someone was keeping the pottery tradition alive. One afternoon he noticed an outdoor pit where pots had been fired. Hill knocked on the door of the home and chatted with a woman who was concerned about the loss of their pottery-making tradition. They developed a friendship, and he began conducting an extensive literature search for ethnographic accounts of the Tohono pottery tradition.

Hill ultimately uncovered a document, written in the Tohono O’odham language that described a step-by-step process of potting. He shared his findings with the Tohono woman. He later received a letter expressing her gratitude for his inspiration, but said that he must ultimately remain an outsider to the sacred culture because he is Anglo.

“Even if I had been Native American from another tribe, I would probably have experienced the same fate,” Hill said. “It was an honor and a tribute to have been allowed a brief journey with her as a potter. To this day, a pot made by her sits on a table in my office. I think of the Tohono O’odham people often.”

To continue preserving the Navajo pottery traditions, Hill joined with Ervan Garrison, a professor of anthropology in the Franklin College of Arts and Sciences, the Institute of Native American Studies, and Hill’s long-time pottery instructor and elder, Sarah Natani. They created a project for the Navajo Nation to engage in arts and cultural practices. They hope to strengthen the Navajo community and to draw attention to the issue of endangered cultural knowledge and practices such as Navajo pottery.

Hill said the ceramics program in the Lamar Dodd School of Art helped him build his knowledge of pottery.

Like the Tohono O’odham, the skill of Navajo pot-making has become a challenged art to keep alive in the Navajo community. The practice is threatened by cheaply produced, often-imported commercial items. Hill said that millions of dollars of “Indian” crafts imported from Asia are sold in the U.S. each year.

Hill’s project, “Mobilizing a Navajo Community through Pottery Arts,” intends to maintain the rich culture of the Navajo Nation. The project was recently awarded a $10,000 grant from the Native Arts and Cultures Foundation that indirectly goes toward the projects’ workshops and the Navajo Nation. An additional College of Education summer research grant will assist this work.

Throughout the project, several Navajo potters, with the assistance of Hill and Garrison, who is a co-principal investigator and an expert in analyzing pottery, will teach the art of pottery to its communities. About eight interested individuals will be chosen to study and make Navajo pottery during a six-day workshop, held in the Shiprock region of the Navajo Nation in New Mexico.

“The tradition of Navajo pottery is much more than about making pots—it’s about creation stories, spirits that inhabit their world, relationships and harmony with others, cosmology, holiness, beauty, happiness and so much more,” Hill said. “In the big picture, conserving endangered cultural knowledge, such as pottery, is really about preserving Native American identity.”