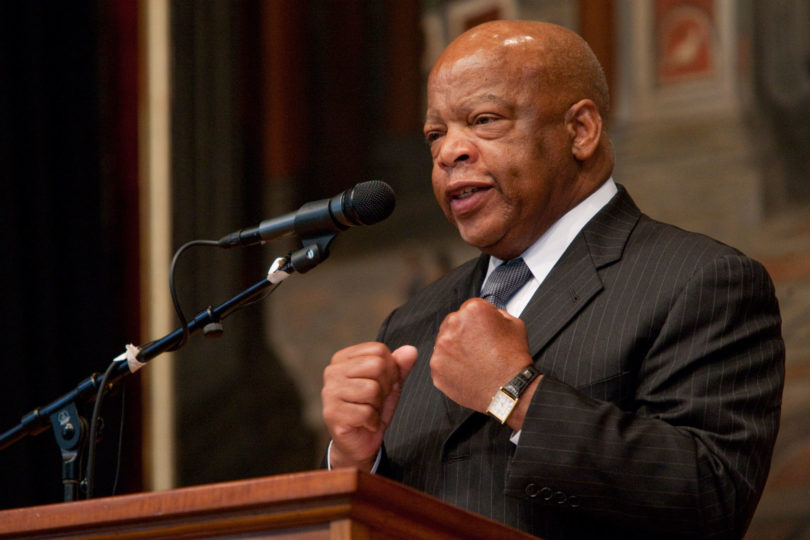 John Lewis, a U.S. representative from Georgia’s 5th Congressional District, told UGA students that it was their turn “to stand up, speak out, find a way to get in the way,” at the 11th annual Mary Frances Early Lecture held April 19 in the Chapel.

“It’s your turn, your day, your moment to get into trouble, necessary trouble to make the world a better place,” he said.

Lewis, a civil rights activist for more than 40 years, said that a lot has changed since UGA was integrated in 1961, and that the nation is better and the world is better, but that he felt that today’s students have a moral obligation to act.

“Yes, we have come a great distance, but there are still big many problems in our world today,” he said. “Too many of our citizens are left out, left behind.”

He spoke about Georgia’s proposed immigration laws and disagreed with having to carry citizenship paperwork.

“We’ve come too far, made too much progress to go back to the dark past,” he said. “There are no illegal human beings, only members of the human family.

“You must find a way to reclaim our nation’s commitment to compassion and our investment in the dignity for human kind,” he said. “Our struggle isn’t for one day, one month, one season or one year. Ours is the struggle of a lifetime.”

Lewis also talked about the need for peace.

Lewis thanked Mary Frances Early, the first African American to earn a degree from the university, and the lecture’s namesake.

“I feel more than lucky, but very blessed to be in your presence,” he said. “Thank you for never giving up.”

In brief remarks at the lecture, Early spoke about her first summer at UGA when she joined the summer chorus and wasn’t allowed to invite her friends and family to the concert at the Chapel.

“The university is integrated only for you, Charlayne [Hunter-Gault] and Hamilton [Holmes]. They may not come on campus because we cannot ensure their safety,” she recounted being told. “When I stood here on this stage as part of the chorus in the summer of 1961, it was a very different crowd.”

“We owe both of you a debt of gratitude for not turning back, for not getting angry, for standing up and speaking out. . . and for fighting for freedom,” she said.