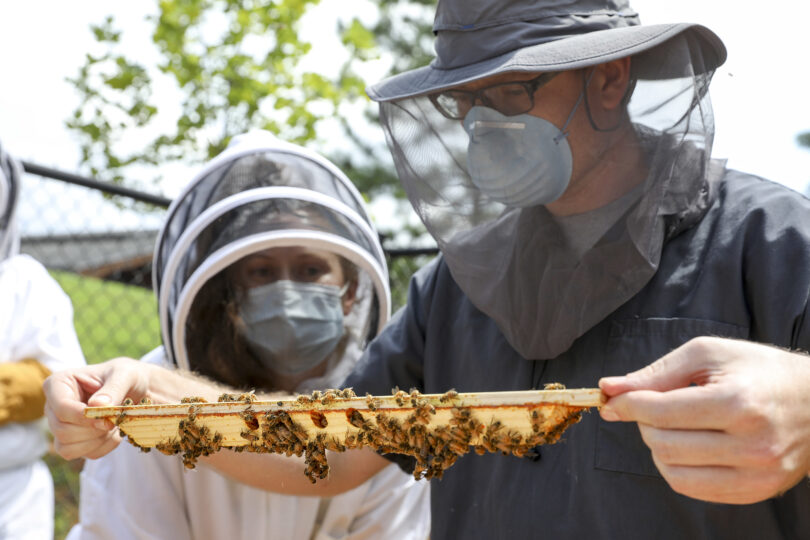 Scientists have long known two facts about the world’s bee population: pollinating bees are vital contributors to healthy crops and a thriving ecosystem, and many bee species are under threat of extinction from pollution, disease and other factors.

The University of Georgia College of Veterinary Medicine has joined the fight to save the bees by building a set of hives on campus. The new program will give residents and senior veterinary students in clinical training experience caring for these insects and is led by Dr. Joerg Mayer, associate professor of zoological medicine. 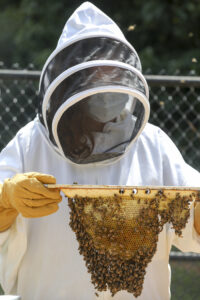 The addition of bees cements the college’s residency program as the first and only in the country to offer a such a wide spectrum of training, from invertebrate to megavertebrate care — creatures ranging from bees to whales.

In the past, it was up to the hobbyist or commercial beekeeper to maintain the health of their bees, but as the risk of antimicrobial resistance increases around the world, veterinarians have been asked to step in for diagnosis and treatment. In January 2017, the Food and Drug Administration put a halt to individuals purchasing antimicrobials for the treatment of bee colonies.

The average veterinarian does not receive much if any education in the care of bees, and beekeepers have limited relationships with veterinarians.

Mayer’s goal is to ensure that the next generation of UGA veterinarians are capable of supporting these important pollinators as well as the honey industry, which is big business. The 2.67 million bee colonies recorded by the U.S. Department of Agriculture in January 2019 are reported to be worth about $17 billion per year.

Farmers also rely on bees for successful harvests. “The next time you go shopping or you are having a dinner, think that bees are directly responsible for the production of about 30% of all food we consume,” Mayer said. “Some agricultural industries, like the almond farmers in California, rely to 100% on bee pollination.” 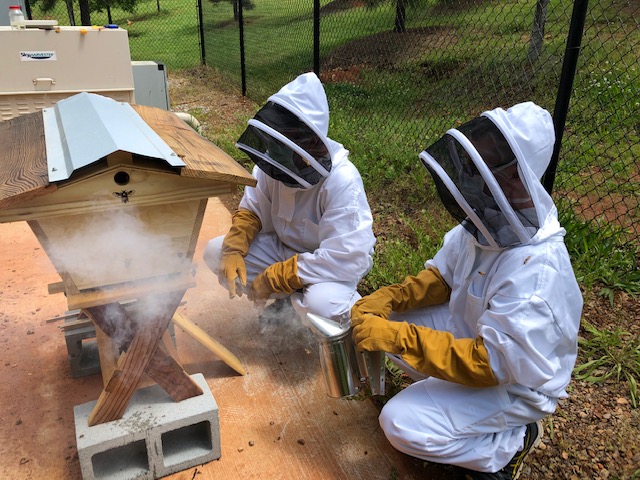 Dr. Gregory Walth, a current zoological medicine resident, had prior experience with beekeeping and sees great value in the developing program. “As an undergraduate, I developed a keen interest in entomology and nearly pursued this field as a career. As I became more interested in infectious diseases and medical treatment of animals, I gravitated to the veterinary profession,” he said. “Now that I am able to approach these insects from a medical viewpoint, I have found an intriguing overlap in my interests.”

But some students will be handling bees for the first time. Amanda Wonn, a fourth-year DVM student, was in the first group to handle the bees. She found the experience enjoyable and feels more confident in her approach to care for bees in the future. “I feel that the knowledge of general beekeeping and basic veterinary care is a very important and necessary part of our education, as we will be the ones who are responsible for the medical care of the hives,” she said.

Initially, there is some fear [from students]. But then curiosity takes over, and that has been very rewarding.” — Dr. Joerg Mayer

Mayer has also formed a Vet Bee Club for CVM students interested in learning more about bees and the role veterinarians can play in their care. With hopes to see the club grow, he has partnered with Keith Delaplane, professor of entomology and director of the UGA Honey Bee Program, to apply for a grant to build eight more hives in various locations, allowing more students access to the bees. 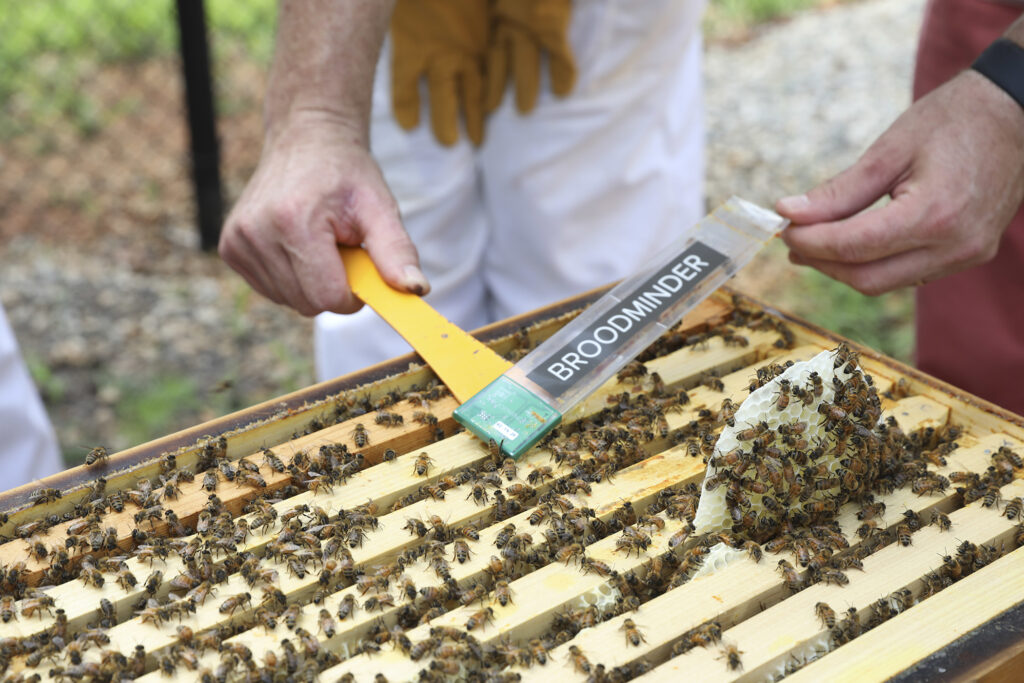 Students in the club will also be allowed to sit for the UGA Master Beekeeper certification exam and will be able to attend meetings with and view the colonies of local beekeepers’ associations. Relationships with local associations are extremely important as veterinarians take on more responsibility for the health of these animals.

“Dr. Mayer has provided us with great information on bees and bee care,” said Amanda Saulnier, a second-year DVM student participant. Due to the pandemic, she has been unable to handle them in person, but there have been a few Zoom calls where students shared and discussed what they’ve learned. “Many of us have gained a greater appreciation for how complex bees are as a hive.”

“Bees are an important part of the economy in Georgia, and the beekeepers know them best,” Mayer said. “Beekeeping is unique to its location. What works in Massachusetts does not necessarily work in Georgia, and these associations are the best resource veterinarians have for this knowledge.” 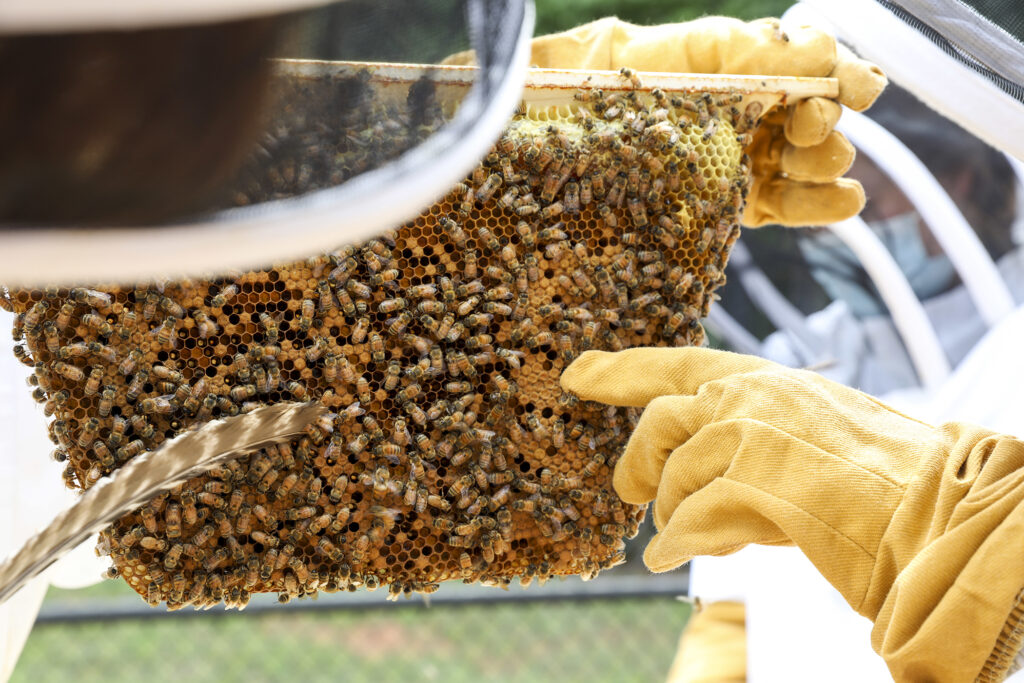 Many students have never worked with bees. “It has been great to see that switch flip,” said Mayer. “Initially, there is some fear. But then curiosity takes over, and that has been very rewarding.”

In the future, Mayer would like to see beekeeping find a place in the curriculum of all UGA veterinarians. “With access to the Honey Bee Program and a wealth of local knowledge, our students will be prepared to treat bee colonies exactly as they would any other animal.”