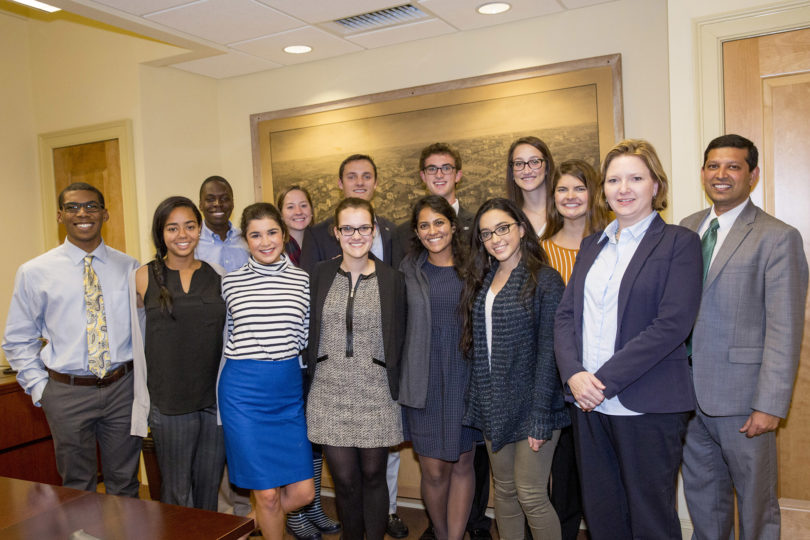 Fourteen students make up the new Student Advisory Board of the Office of the Vice President for Instruction.

Bert Thompson is a senior, and he is beginning to think about all of the experiences he has had at UGA over the past four years. But Thompson isn’t just reminiscing; as a member of the Student Advisory Board of the Office of the Vice President for Instruction, he is dissecting programs such as orientation, advising and experiential learning to provide input for the benefit of future students.

“The opportunity to make a great place even better is just amazing,” said Thompson, who is majoring in international affairs and history. “And it’s a great feeling when you say something and see a reaction and a response. … It’s great to be involved in improving something on campus.”

“We create a lot of policies and changes that impact students, so the student perspective is important,” Shrivastav said of his office, which considers ensuring a quality student experience from the day he or she is admitted until graduation its main objective. “Once we began talking, the students became very engaged, and they often stop when they see me on campus to share a new idea.”

The Office of the Vice President for Instruction oversees more than a dozen units—including Admissions, the Washington Semester Program, the First-Year Odyssey Seminar Program, the Office of Online Learning, Academic Advising and Learning Communities—and Shrivastav felt all of them would benefit from student input.

“Dr. Shrivastav has given students a forum for sharing their ideas on enhancing the learning experience, and the advisory board is already having a positive impact,” said Senior Vice President for Academic Affairs and Provost Pamela Whitten. “This isn’t a surprise considering that our students are among the best and brightest in our state and nation.”

Just weeks after the first session, the office adopted a new tagline, “Summer in Athens,” for the new summer school awareness campaign based on the student suggestions. The enrollment period opened earlier in the fall so that students will be able to make plans sooner based on the classes offered.

Shrivastav’s office already had begun work on some of the issues, such as implementing changes to DegreeWorks that would help students track their path toward graduation more closely, and other ideas are being studied to determine their impacts and costs.

“We want the students to know that their concerns are being heard, and we want them to see that we are listening,” Shrivastav said. “This board is having an impact on students and their college experience.”