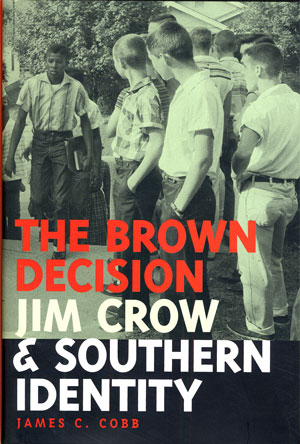 The 1954 Brown v. Board of Education ruling was a watershed event in the fight against racial segregation in the U.S. The recent 50th anniversary of Brown prompted a surge of tributes. At the same time, says UGA history professor James Cobb, it revealed a growing trend of dismissiveness and negativity toward Brown and other accomplishments of the civil rights movement. Cobb responds in The Brown Decision, Jim Crow & Southern Identity to what he sees as distortions of Brown’s legacy and their implied disservice to those whom it inspired and empowered.

Cobb begins by looking at how our historical understanding of segregation has evolved since the Brown decision. In particular, he targets the tenacious misconception that racial discrimination was at odds with economic modernization-and so would have faded out, on its own, under market pressures. He then looks at the arguments that Brown energized white resistance more than it fomented civil rights progress. This position overstates the pace and extent of racial change in the South prior to Brown, Cobb says, while it understates Brown’s role in catalyzing and legitimizing subsequent black protest. Finally, Cobb suggests that the Brown decree and the civil rights movement accomplished not only more than certain critics have acknowledged but also more than the hard statistics of black progress can reveal.