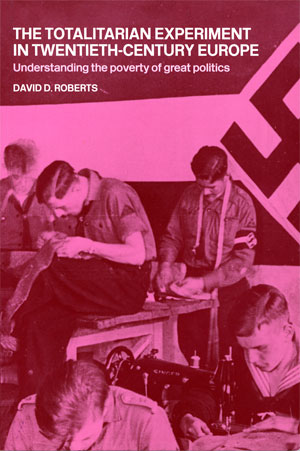 In his new book, David Roberts, Albert Berry Saye Professor of History at UGA, provides a challenging new understanding of totalitarianism by focusing on its historically specific dimensions.

Italian Fascism, Soviet Communism and German Nazism emerged at roughly the same time, in the wake of the First World War, and together they present some of the most perplexing questions in modern history.

Despite their ultimate failure, these unprecedented regimes have fundamentally altered our sense of the political spectrum, even the range of human and historical possibilities.

Rather than dismissing in terms of national weaknesses or psychological aberrations, Roberts shows how the totalitarian mode of collective action in Italy, the Soviet Union and Germany was a response to enduring tensions in the modern mainstream.

By providing a fresh understanding of the novel aspirations fueling the three departures, this book illuminates the practices of each regime, showing the new mode of action yielded a characteristic combination of radicalization, narrowing, myth-making and disastrous failure.