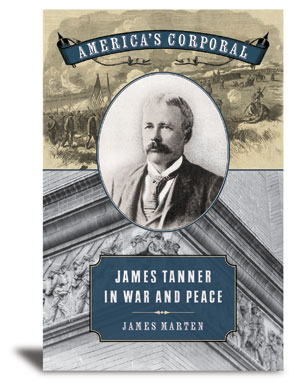 In America’s Corporal: James Tanner in War and Peace, author James Marten argues Tanner may be the most famous person in 19th-century America that no one has heard of.

During his service, Tanner lost the lower third of both his legs and afterward had to reinvent himself. After a brush with fame as the stenographer taking down testimony a few feet away from the dying President Abraham Lincoln in April 1865, Tanner eventually became one of the best-known men in Gilded Age America. He was a highly placed Republican operative, a popular Grand Army of the Republic speaker, an entrepreneur and a celebrity. Yet virtually no one—not even historians of the Civil War and Gilded Age—knows of him today.

Drawing on a variety of primary sources, Marten, who is chair of the history department at Marquette University, brings Tanner’s life and character into focus and shows what it meant to be a veteran in an era that at first worshipped the saviors of the Union but then found ambiguity in their political power and insistence on collecting ever-larger pensions.