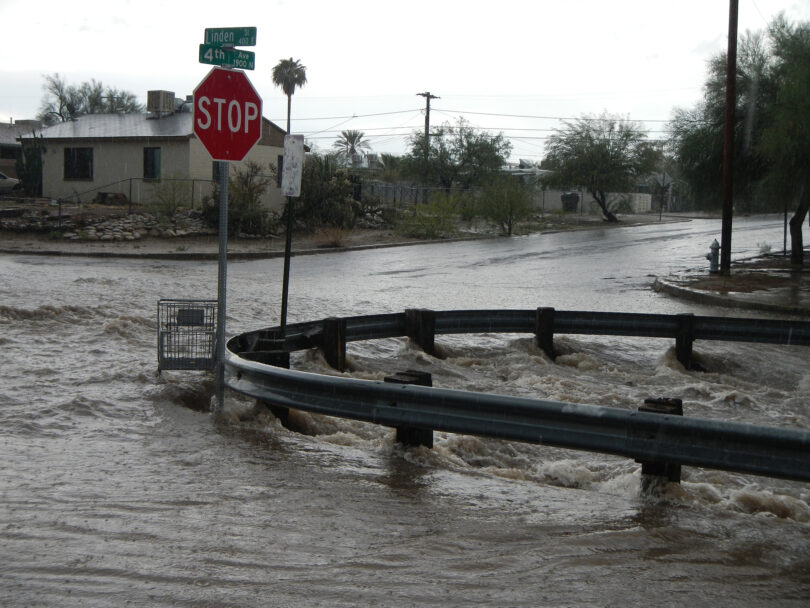 Flooding at Bronx Wash in Tucson, Arizona, one of two urban watersheds used for modeling by the researchers. A wash, also known as an arroyo, is a dry stream that flows only seasonally. (Submitted photo)

Flooding in urban areas cost Americans more than $106 billion between 1960 and 2016, damaging property, disrupting businesses and claiming lives in the process. Determining which areas are most likely to flood amid ever-changing land use and shifting rainfall and climate patterns can be expensive and complicated – and past methods of drawing flood maps fail to capture the inherent uncertainty in flood predictions.

Now, new research from the University of Georgia outlines a simplified, cost-effective method for developing flood maps that reflects the uncertainty in flood predictions. Published in the journal Water, the study was led by engineering professor Brian Bledsoe, director of UGA’s Institute for Resilient Infrastructure Systems (IRIS), and Tim Stephens, a UGA and IRIS alumnus now with Dynamic Solutions LLC, an engineering, planning and research firm that specializes in water resources. 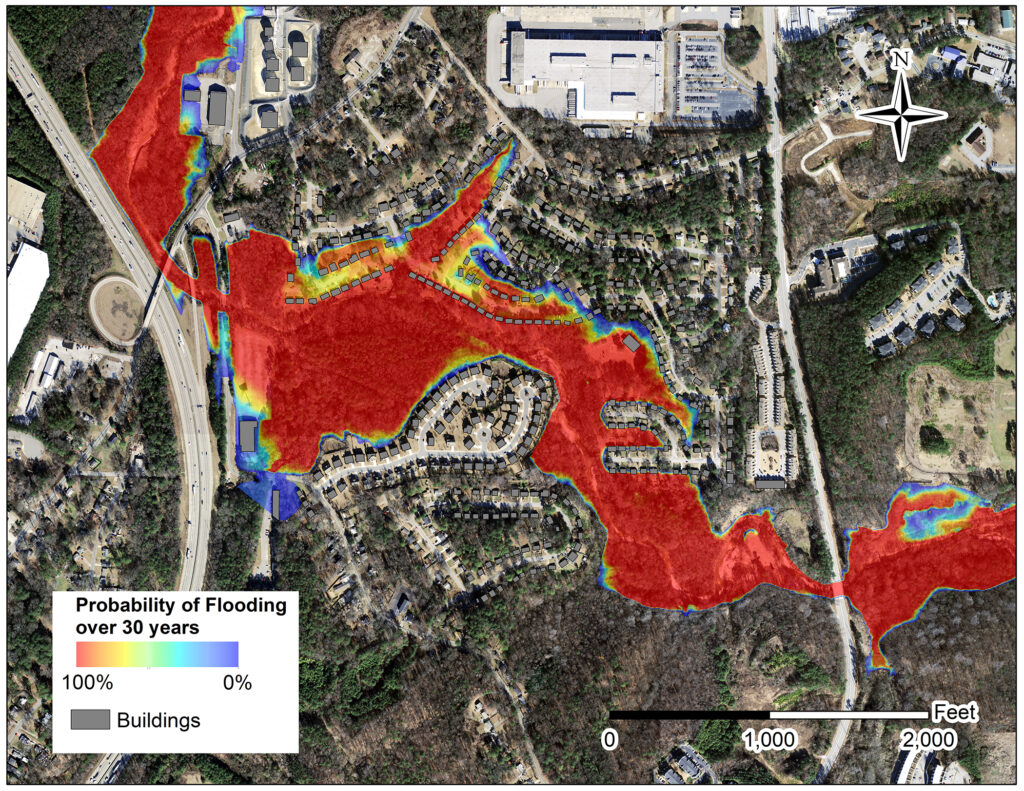 A probabilistic floodplain map for Proctor Creek in Atlanta, an urban watershed used for modeling by the researchers.

The study offers what the researchers describe as “a practical, simplified approach for quantifying uncertainty in flood hazard estimates” by modeling flooding in two urban watersheds: Proctor Creek in Atlanta and Bronx Wash in Tucson, Arizona.

“Conventional flood hazard mapping tends to draw a single line on a map showing the flood zone, which is often interpreted by the public and politicians as, ‘You’re not going to get flooded if you’re outside the line,’” said Bledsoe. “In reality, that line can be very uncertain and fuzzy, and a large proportion of flood damages occur outside of it.”

The new approach introduced by Bledsoe and Stephens uses the concept of confidence intervals, which show the standard of deviation around a specific prediction, to help clarify the flooding risk homeowners face in any given place. This approach differs from traditional flood maps because it captures the variation in potential flooding scenarios for any given spot within the map.

“We use advanced tools to quantify the uncertainty around flood lines and describe the full range of locations where flooding is likely to occur. It’s like confidence intervals based on a standard deviation in statistics – the flood zone has confidence intervals around it and we reveal that variability to help with planning and decision-making to protect people and property. The uncertainty may be 100 feet wide in some places or more than 1,000 feet wide in other places along the floodplain,” said Bledsoe. 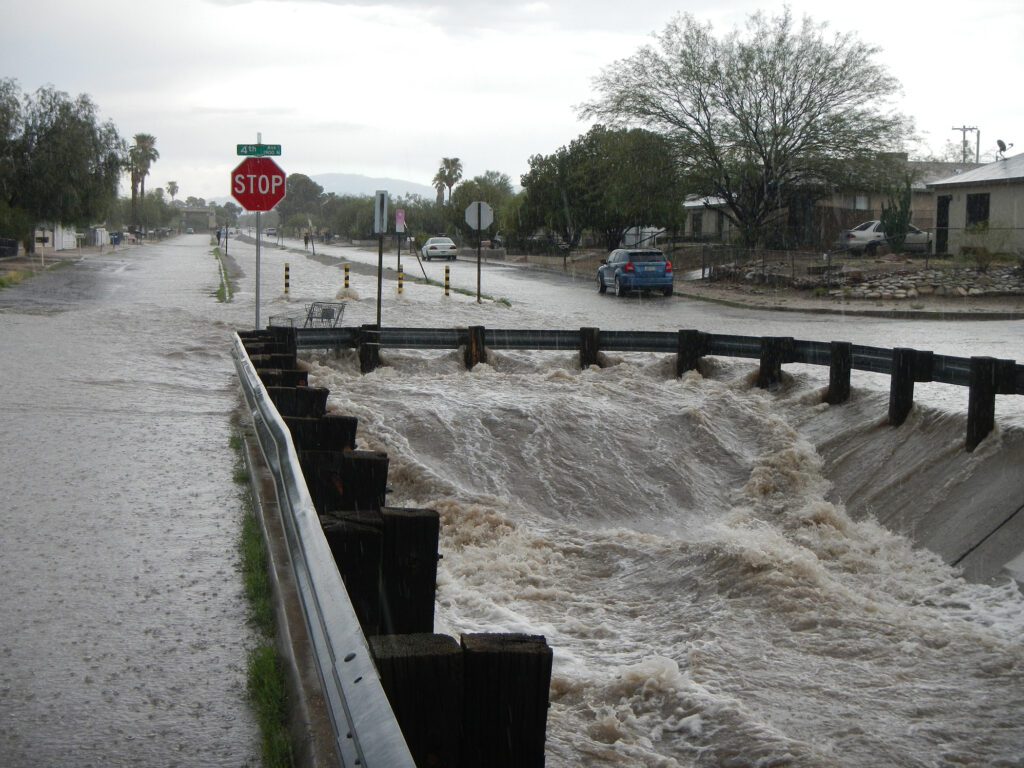 Another view of flooding in Tucson, Arizona. (Submitted photo)

In the past, this kind of detailed analysis wasn’t accessible to most municipalities, especially in communities lacking resources.

“The way this type of analysis has been done in the past is very time intensive and involves running complex hydraulic models thousands of times to understand the full extent of the flood hazards. This research demonstrates a simplified method that produces very similar and acceptable results but is much less time intensive and is easier and less costly to perform,” Bledsoe explained.

Stephens and Bledsoe hope their approach will produce maps that more realistically depict flood zones with less effort and lower costs compared to previous methods. They believe their method should result in improved maps that are more frequently updated.

“Our simplified approach is more accessible to a broader audience, such as those with limited time, budget or technical resources,” said Stephens. “It can be implemented with a small increase in the level of effort for traditional regulatory flood hazard studies, making the incorporation of uncertainty much more approachable, viable and cost effective.”

To further advance their vision of creating the clearest, most accurate flood maps possible, Bledsoe and Stephens have been working with social scientists to determine the best ways to communicate a complete picture of the risks to the public.

“For example, we’ve found that saying things like, “You can be a certain percentage confident that your home will not be flooded in the next 20 years” is much easier to grasp than abstract statements about the 100-year flood or 1% annual exceedance probability,” Bledsoe explained.

The full study is available here.