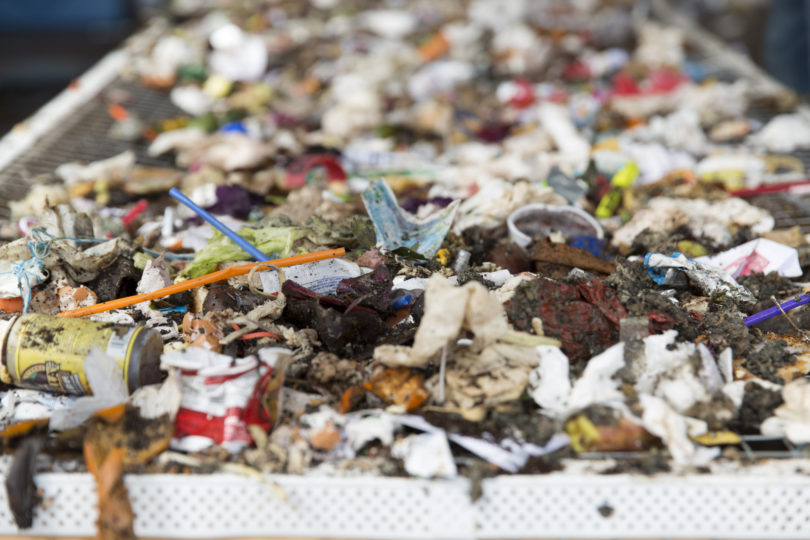 Researchers in the New Materials Institute use green engineering principles in their work with industry partners to create new products to reduce pollution. (Photo by Andrew Davis Tucker/UGA)

Next time you visit the beach, take a look around. Chances are you’ll see a water bottle stuck in the sand. A handful of cigarette butts scattered through the dunes. Maybe a paper cup bobbing in the surf.

Eventually, all this trash may break down into smaller pieces, but it never quite goes away. That’s because one thing all these products have in common is some type of plastic, and plastic doesn’t decompose, making it one of the top environmental pollutants concerning scientists around the world.

One such scientist is UGA’s Jenna Jambeck. The associate professor of engineering thinks companies that create new products without considering their environmental ramifications are being shortsighted. Once those products are opened, the plastic, non-recyclable packaging wrapped around them just gets tossed in the trash. Best-case scenario, it winds up in a landfill, where it will sit indefinitely without biodegrading. In other situations, it ends up floating in the sea or sinking to the ocean floor.

Jason Locklin, an associate professor in UGA’s chemistry department, had a related question: Why aren’t we considering what happens to products once they’ve outlived their purpose? Inspired by Jambeck’s 2015 paper in Science, which found that 8 million metric tons of plastic enter the world’s oceans every year, Locklin realized it was time to stop just wringing our hands about the plastic problem. It was time to act. 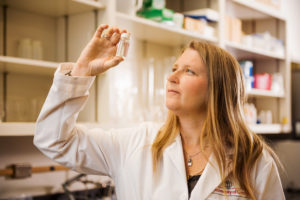 Locklin and Jambeck, along with Branson Ritchie, a Distinguished Research Professor in the College of Veterinary Medicine, are leading the charge to bring plastic alternatives that are economically viable and environmentally friendly to the market.

Locklin serves as the director of the New Materials Institute (NMI), which is now entering its second year of operation and consists of three interconnected centers: Circular Materials Management; Polymers, Fibers, and Coatings; and Technology, Development, and Implementation. Jambeck heads Circular Materials Management while Ritchie directs Technology, Development, and Implementation.

The center’s overarching mission is to create new materials and technologies that are commercially successful and sustainably made. The ultimate goal is to build a “circular economy,” Jambeck says. The current model for our economy is linear, Jambeck adds, meaning that new products are made, used, and then disposed of when they’ve served their purpose. In a circular economy, waste products are repurposed into other materials to make new items.

We have a responsibility to do something about this persistent plastic pollution issue.” — Jason Locklin, associate professor of chemistry

This approach has economic benefits, as it reduces virgin material costs for companies and jump-starts new businesses and job growth by assigning value to waste and the gathering of trash. More than that, though, it rewards innovative thinking. And that’s where the University of Georgia steps in, coming up with new ways to think about products and how to best address the environmental issues facing our world.

“We have a responsibility to do something about this persistent plastic pollution issue,” Locklin says. “It’s our duty to inform the public and to allow the public to make the materials choice based on all of the evidence.”

And the evidence is increasingly showing that the plastic problem is much bigger than most people thought.

To date, much of the research focusing on ocean plastics has taken a clean-up approach, with the goal of getting as much of the plastic that’s already in waterways out as soon as possible. And while ridding the ocean of plastics is a laudable goal, the NMI is more focused on stopping pollution at the source. When speaking to the U.S. Senate Committee on Environment and Public Works in May 2016, Jambeck likened the situation to a parent walking in to find an overflowing bathtub.

“What do you do first?” Jambeck asked. “More than likely you would not start mopping and cleaning up the floor—you would turn off the faucet to stop the flow and then address the clean-up.” 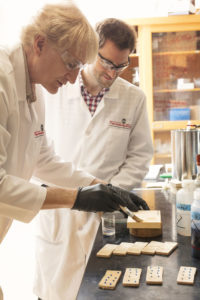 One of the principles of green engineering is to consider end of life as a design criteria when developing new products. This means accounting for what happens to products when people get rid of them, whether that means making them recyclable or biodegradable so they aren’t cluttering up landfills or using them as source material for new products. This philosophy is at the core of the New Materials Institute’s mission.

“It’s a really simple principle, but if we are guided by it, we would never have made some of these products that we have,” Jambeck says.

NMI teams are working with industry partners to improve the efficiency and applications of biobased, degradable plastic alternatives and to prove their safety in land and aquatic environments. The institute was also recently awarded the first phase of a grant from the National Science Foundation that will enable the NMI to join the Center for Bioplastics and Biocomposites (CB2). Based at Iowa State University, CB2 currently works to develop biobased products from agricultural resources. The collaboration with NMI will allow the expansion into the area of sustainable packaging and help connect the NMI to industry partners like Ford, 3M, ADM, Hyundai, and the U.S. Department of Agriculture, as well as other university-based research institutes and colleges.

“When you’re talking about developing technologies in an academic setting and actually wanting to translate them to make an impact, you need to work with companies,” Locklin says. “In the NMI, our primary focus to date has been developing unique industry partnerships.”

And joining CB2 is just the start for the institute.

“The ultimate question we hope to answer is how do we make healthier, better lives through the application of modern chemistry, engineering, and medicine?” Ritchie says. “Our goal is to develop technologies from the ground up that are actually going to be applicable. And that’s what we’re able to do very effectively at the university with our in-state team members, our out-of-state team members, and our global supporters.”