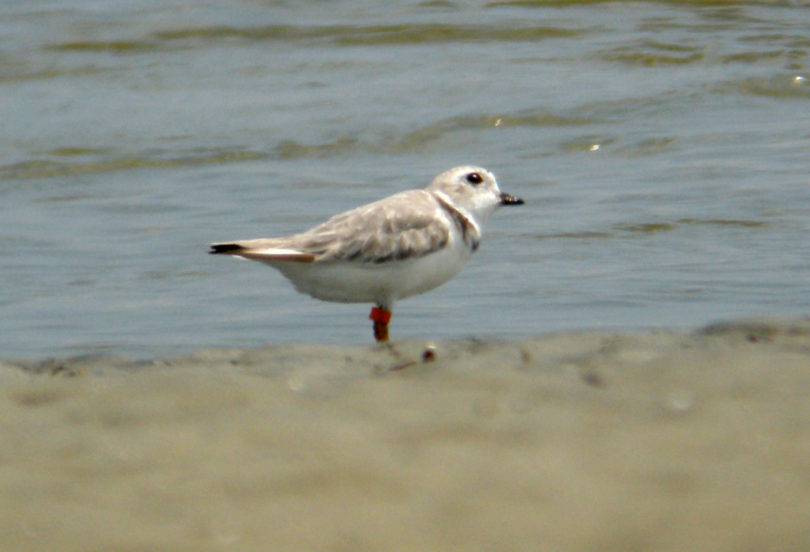 A piping plover wanders a beach on Little St. Simons Island in August 2010.

Athens, Ga. – Predicting the risk of extinction is a complicated task, especially for species that migrate between breeding and wintering sites. Researchers at the University of Georgia and Tulane University have developed a mathematical model that may make such predictions more accurate. Their work appears in the early online edition of the Royal Society journal Biology Letters.

“The concern is that for a lot of species, we don’t know very much about their wintering grounds,” said Richard Hall, assistant research scientist in the UGA Odum School of Ecology. “Here in the U.S. we do a pretty good job of conserving breeding habitat for species of concern, but often we have no idea what kinds of threats are facing their non-breeding areas.”

Hall and Tulane University’s Caz Taylor developed a new model that builds upon a theory of population dynamics known as metapopulation theory.

“A metapopulation is made up of many sub-populations that live in patchily-distributed sites across a landscape,” Hall said.

In its simplest form, metapopulation theory describes the fraction of suitable habitat patches occupied by a species. Individuals from a sub-population emigrate from their original site to colonize previously unoccupied patches of suitable habitat where they either thrive or die out. When the rate of successful colonization exceeds the rate of extinction, the proportion of occupied patches rises and the metapopulation is likely to persist.

The problem with simple metapopulation theory is that it assumes colonization occurs continually and is possible from any adjacent patch. It is therefore not applicable to migratory species that seasonally vacate their breeding sites to move to wintering sites, and vice versa. So while the theory has worked for certain conservation efforts—such as informing decisions about the extent of suitable habitat needed to support endangered species such as the northern spotted owl in the Northwest and Bachman’s sparrow in the Southeast—it does not fit in all cases.

To adapt the theory for migratory species, Hall and Taylor added more complexity to the model. They divided habitat patches into two categories: those used during breeding season and those used for wintering. In their model, colonization only occurs between breeding and wintering (non-breeding) patches, not between patches of the same type.

Piping plovers provide a good example. There are only a limited number of suitable habitat patches—open, sandy beaches that aren’t excessively disturbed by human activity—so the number and size of the breeding patches in the north and the wintering patches in the south—and the distances between them—are well known. Through bird banding and tracking technologies, researchers are beginning to develop an understanding of the migration patterns between breeding and wintering patches. Taylor and Hall’s model could be applied to describe these birds’ population dynamics.

Hall said that the model highlights the importance of taking into account the colonization and extinction rates at both breeding and non-breeding sites, which is more easily said than done.

“What our model shows is that even if the populations in the breeding areas look healthy, without knowing the state of the non-breeding areas, we could be vastly underestimating the likelihood of extinction,” he said.