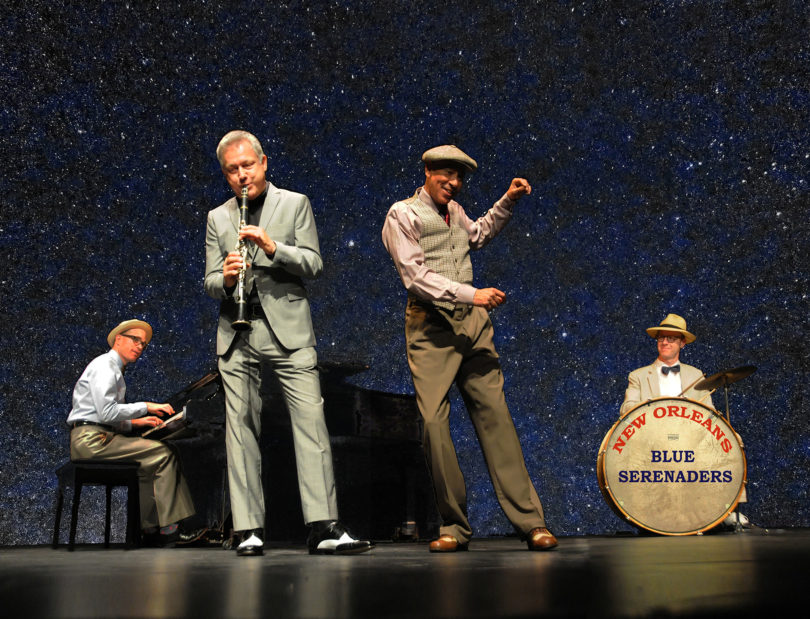 The UGA Performing Arts Center will present A Night in Old New Orleans Feb. 7 at 8 p.m. in Hodgson Concert Hall.

Athens, Ga. – The University of Georgia Performing Arts Center will present A Night in Old New Orleans Feb. 7 at 8 p.m. in Hodgson Concert Hall. The show reunites the stars of “One Mo’ Time,” the Off-Broadway hit musical that ran for more than three years at New York’s Village Gate.

A Night in Old New Orleans features clarinetist Orange Kellin and song and dance man Vernel Bagneris along with other talented New Orleans musicians who bring to life the Big Easy sounds of yesteryear.

Kellin has a long and illustrious career as a musician, arranger and music director. During the 1970s, he toured with his band The New Orleans Joymakers throughout the U.S. and Europe. He has performed and recorded with many musicians, most notably accompanying Louis Armstrong at Satchmo’s 70th birthday concert at the Newport Jazz Festival in 1970. He also played on the Oscar-nominated soundtrack and appeared in the film “Pretty Baby.”

Bagneris is an Obie and Outer Critics Circle award-winning singer, dancer and actor. He appeared in the film “Pennies From Heaven” with Steve Martin and Bernadette Peters, and he choreographed and acted in the Oscar-winning “Ray” with Jamie Foxx. He has also acted on television, including a recurring role for three seasons in “Treme.”

Joining Kellin and Bagneris will be pianist and singer Steve Pistorius and drummer Walter Harris, both veterans of the New Orleans traditional jazz scene and regulars at Preservation Hall.