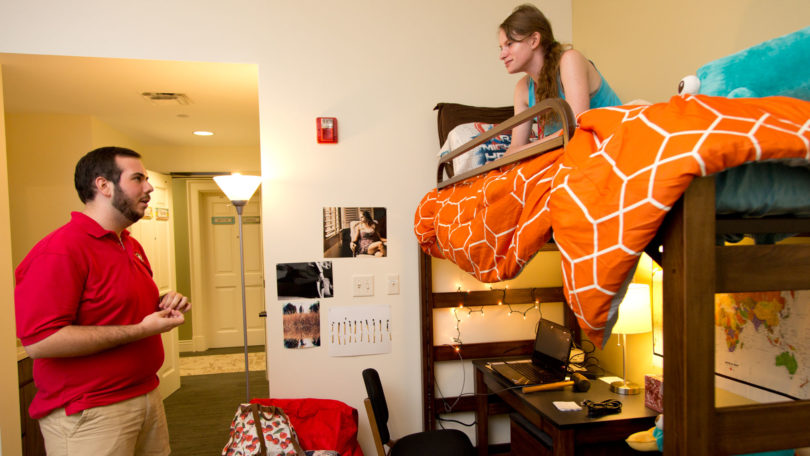 As they carried bags and suitcases to their rooms, several Rutherford Hall residents were looking around to see what was different from the last time they lived in a building with the same name.

The new Rutherford Hall stands where the previous residence hall was located. It now has updated facilities and more space, but a similar feel.

“The new building is great,” said Stephen Mays, a resident assistant who lived in the old Rutherford Hall. “It feels a lot more open with the higher ceilings and extra windows, but they still maintained the same level of hominess to it.”

The 261-bed building has four floors and an exterior that closely resembles the previous structure, which was built in 1939. The new building contains some of the historic features with new modern amenities. One of the most noted changes is the inclusion of a private bathroom with the rooms.

“The rooms are all huge and spacious,” said junior math major Karla Carreno. “The thing that is a little bit different is that since we have our own bathrooms-which is very nice in a way-it’s a little more private.”

Junior theatre and public relations major Molly Pease agreed with Carreno, who also is a resident assistant for the building.

“I really do appreciate having my own bathroom now,” she said. “Although I kind of liked the communal bathrooms, because you would get to know the people who were there when you were.”

Mays and Pease also said they were glad the new building contains “old friends” like a spacious lobby and a piano students can play.

“I am glad they brought [the piano] back,” she said. “It was really nice just hearing it being played a lot of the time.”

Residents, such as senior environmental engineering major Elizabeth Crute, also are taking advantage of the new balcony on the back of the building.

“I love the balcony, and I really love that they put out nice furniture for us to use,” she said.

Crute said she’s not sure if the building will have the same community feel it had when she lived in the old building, but she is optimistic it will be the same, if not better.

“I had such a fantastic experience when I lived in old Rutherford, so part of this is just new to me,” she said. “But I know I’m going to love it because all of the people here are great.”

“We are delighted that the new Rutherford Hall meets students’ needs for being successful academically and creating community in a 21st century environment. Just as important, we have created a look and feel of the new building that is strongly reminiscent of the original residence hall,” he said. “Students love the new building and will be able to enjoy it for many years to come.”