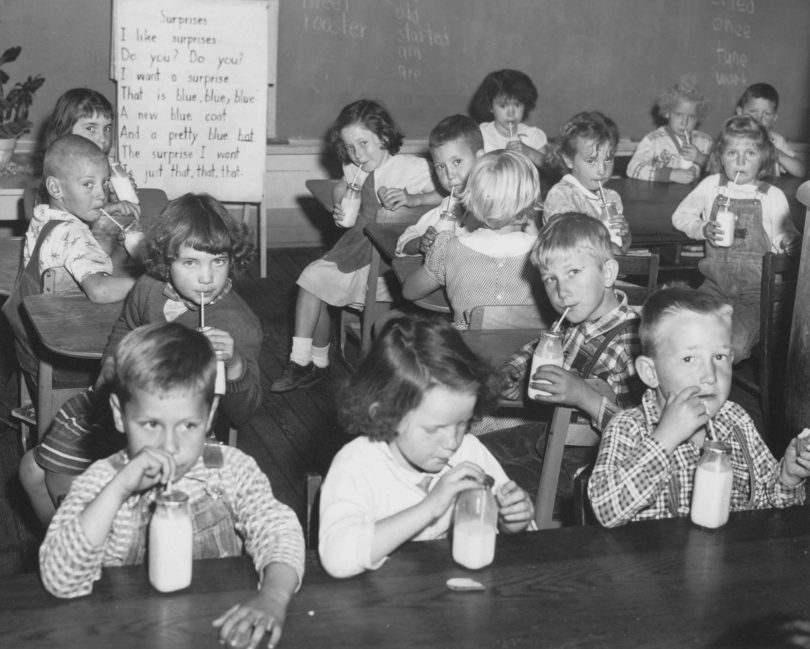 Georgia children drink milk as part of the National School Lunch Program circa 1947-1955. The exhibit "Food

The Richard B. Russell Library for Political Research and Studies will feature the exhibit Food, Power, and Politics: The Story of School Lunch Sept. 26 to May 15. The exhibit examines the complicated past of the National School Lunch Program, signed into law by President Harry Truman on June 4, 1946.

The exhibit features historic images depicting schools and children in Georgia dating back to the 1920s as well as related ephemera, including lunch pails, sample menus and classroom activity packets. Letters, speeches and assorted publications document the legislative battle to create and expand the program from the 1940s to the 1990s, complemented by video and oral histories.

With a focus on people and events in Georgia, the exhibit was developed to commemorate the Russell Library’s 40th anniversary in 2014.

U.S. Sen. Richard B. Russell Jr. authored the original legislation establishing the program and played a crucial role in steering it through both houses of Congress. Russell said that the creation of this program was his proudest legislative achievement during his long career in the U.S. Senate.

What began as a way to strengthen the nation through better nutrition for schoolchildren soon became a complicated program administered by local, state and federal partners with competing interests. The program also evolved to meet the changing needs of children, politicians and corporate interests over time.

A bigger and broader program more than 60 years after its original passage, the National School Lunch Program continues to be a political hot-button issue today.

In addition to Russell, U.S. Sen. Herman Talmadge, a member of the Senate Select Committee on Nutrition and Human Needs, also played a key role in school lunch.

Talmadge’s support of the Childhood Nutrition Act and subsequent amendments greatly expanded the NSLP, including the creation of the school breakfast program.

The Russell Library is collaborating with UGA’s Athens Science Cafe and the Clarke County School District to sponsor an event focused on childhood nutrition featuring Caree Cotwright, an associate professor in the College of Family and Consumer Sciences, taking place Oct. 22 at Chase Street Elementary School. Other events related to the exhibit are scheduled for spring 2015.

The exhibit is free and open to the public.

More information about the program series is at http://www.libs.uga.edu/russell/programs/events.html.

The galleries of the special collections libraries are open from 8 a.m. to 5 p.m. weekdays and 1-5 p.m. on Saturdays.

The building is not open on university holidays or the Saturdays of home football games.

To schedule a tour of the special collections libraries galleries, contact Jean Cleveland by emailing jclevela@uga.edu or by calling 706-542-8079.