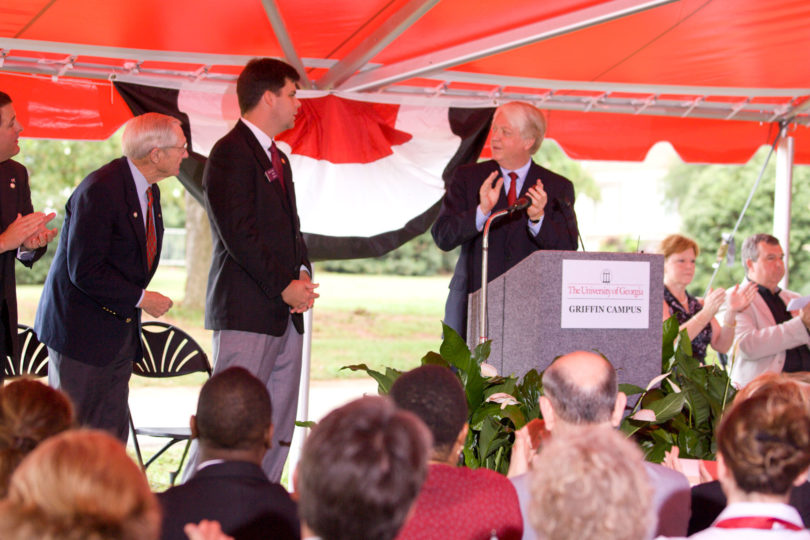 A large contingent from Athens joined Griffin campus faculty, staff and students, local legislators and Griffin/Spalding County leaders on Aug. 30 to break ground for the new Student Learning Center to be constructed on the Griffin campus.

UGA President Michael F. Adams presided at the groundbreaking ceremony, joined by Cheryl Matlock and Dave Lamb, who served as co-chairs of the SPLOST committee that approved the funding for the Student Learning Center.  State Sen. Ronnie Chance and state Reps. John P. Yates and David Knight also spoke at the event.

“Three years ago, this was nothing more than a dream,” said Matlock. “Today it is a reality. A new educational era is coming to Spalding County.”

Chance praised the effort to build the Student Learning Center as “a great example of a community coming together—having a dream and realizing that dream.”

Following their remarks, the platform party moved to the construction site where they were joined by Griffin Mayor Bill Landrum and Eddie Freeman, chairman of the Spalding County Board of Commissioners.

Deans Scott Angle, Louis Castenell, Robert Sumichrast and Laura Jolly and Associate Dean Charles Kutal also were on hand, representing the five UGA schools and colleges that now offer degree programs on the Griffin campus.  After the groundbreaking, the crowd adjourned to the Woodroof Agricultural Pavilion on campus for a reception. Later in the day, President Adams spoke at the Griffin Rotary Club.

UGA has offered bachelor’s degree-completion programs since 2005 at the Griffin campus, which was founded in 1888 as the Georgia Experiment Station. As of this fall, seven undergraduate majors are being offered, as well as two graduate degree programs.

Approximately 70 students are now enrolled, up from 15 in 2005. The new Student Learning Center, expected to be completed in December 2008, will ultimately be able to accommodate some 2,000 students.