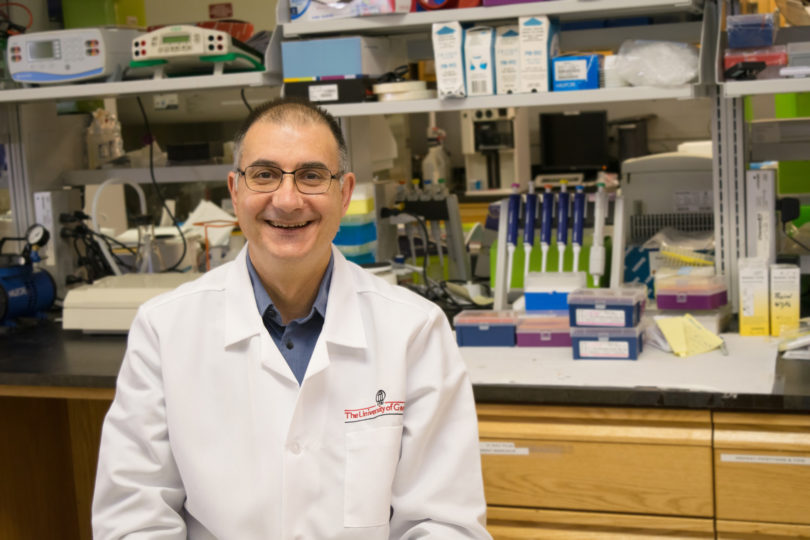 Nick Filipov is an associate professor in the department of physiology and pharmacology in the University of Georgia's College of Veterinary Medicine (Credit Amy Ware).

An estimated 25 percent of the 700,000 troops who engaged in the fierce battles of Operation Desert Storm and related Gulf War combat during 1990-91 are fighting a different, but relentless foe: Gulf War illness.

“Substantial cognitive, learning and motor deficits are among the most profound and debilitating effects of Gulf War illness,” said Nick Filipov, an associate professor in the physiology and pharmacology department in UGA’s College of Veterinary Medicine. Other symptoms include extensive pain, headache, fatigue, breathing problems, gastrointestinal issues and skin abnormalities.

While there is some debate on the causes of Gulf War illness, research indicates that soldiers participating in the war experienced unprecedented exposures to pesticides, nerve-agents and other chemicals, which combined with the stresses of war, are likely to blame for the illness.

But, said Filipov, “The most pressing issue is that veterans with Gulf War illness are growing older, so the cognitive symptoms will be amplified as age takes a toll on the brain.”

Now, funded by a $750,000 grant from the U.S. Department of Defense, Filipov and colleagues are testing a potential treatment that may allow these veterans to fight back.

“A major research interest of mine is how the brain and the immune system function and malfunction in health and disease,” said Filipov, who also studies Parkinson’s and other neurological diseases with ties to environmental contaminants. “There’s increasing evidence that the immune system is dysfunctional in the veterans with Gulf War illness, and perhaps neuroinflammation plays an important part in the manifestations of the disease.”

The researchers will administer a novel sugar-based molecule developed by Harn to mice with exposures similar to those of veterans with Gulf War illness. This molecule, which is likely safe because it’s found in human milk, already has been tested in a disease model for multiple sclerosis. The investigators expect to reduce or improve Gulf War illness-associated cognitive decline by restoring the immune system’s function and mitigating inflammation in the brain.

The study will look at two established models of Gulf War illness: one that involves timed exposures to a pesticide and the anti-nerve gas medication given to Gulf troops, and a second model that incorporates exposure to a nerve gas surrogate, the chemical insect repellent DEET, and stress, in addition to the same exposures as the first group. The researchers will analyze the exposures’ immediate effects and administer treatment several months after all exposures have ended.

“Just as Gulf War veterans are being treated for their illness years after they were exposed to chemicals during the war, the mice in our study will experience a delay before they are treated,” Filipov said.

The researchers will assess the treatment’s effectiveness in improving brain function and restoring the immune system through behavioral, cellular and molecular testing. Results are expected in approximately two years.