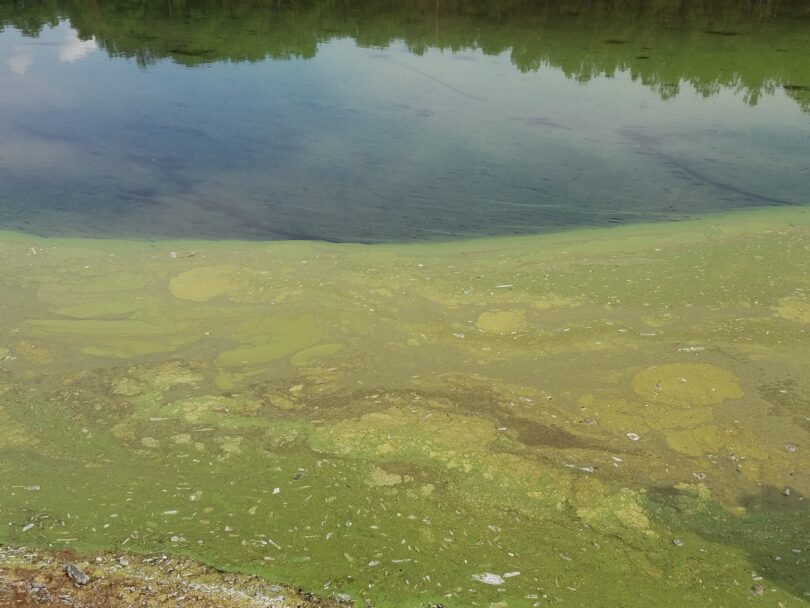 Algae in the UGA pond in Whitehall Forest (Submitted photo)

When a couple from Marietta, Georgia, noticed their dog behaving strangely after swimming in Lake Allatoona in Bartow County last year, they immediately rushed her to an ER. But even 30 minutes after such a great day of playing, it was too late. The dog died from exposure to toxic algae.

Outbreaks of harmful algae have increased in recent years due to warming trends and longer summer seasons. Also called cyanobacterial algal blooms or CyanoHABs, these large-scale ecological disturbances are often caused by increased urbanization, nutrient pollution, poor waste management and warming weather. The algae can produce toxins that are harmful to humans, pets and aquatic ecosystems. 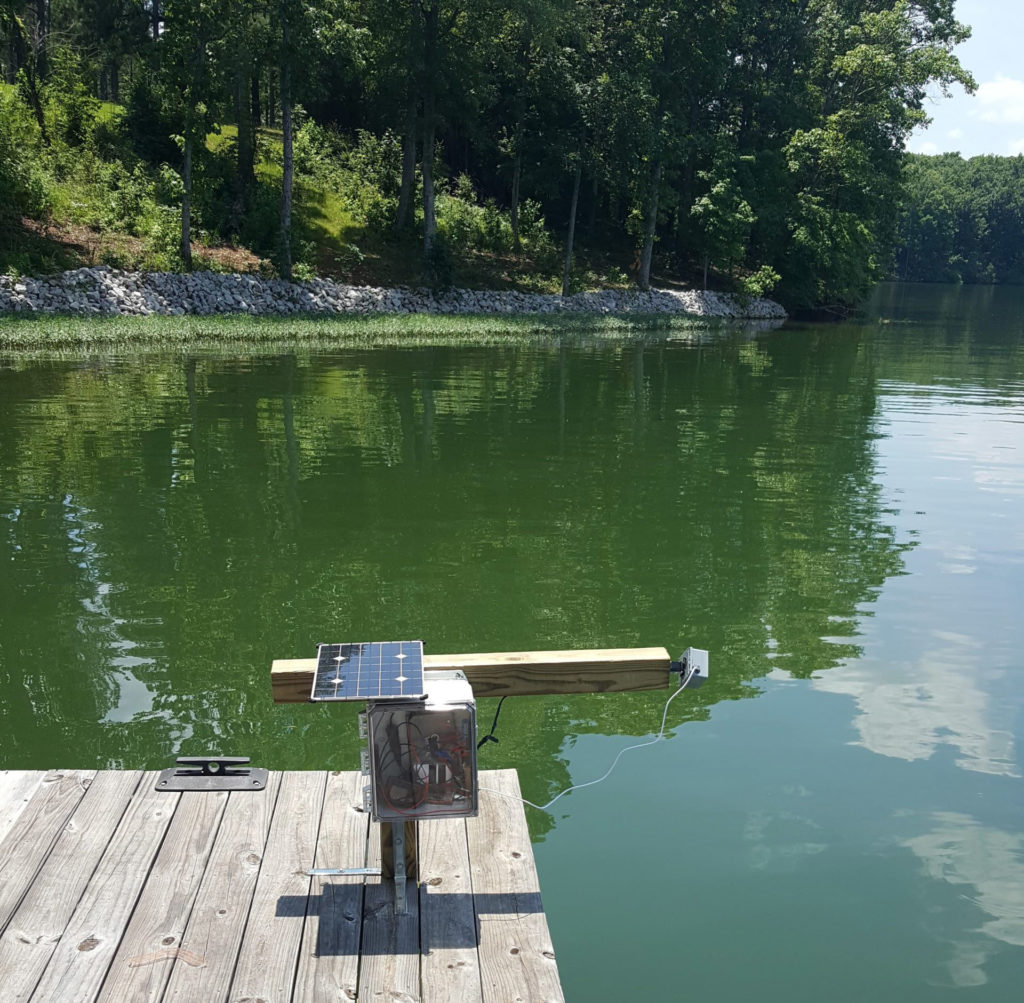 The CyanoTRACKER project, a collaboration between University of Georgia researchers, collects and integrates community reports, remote sensing data and digital image analytics to detect and differentiate between regular algal blooms and CyanoHABs.

It is the first early reporting system of its kind.

In 2015, the research team completed a pilot study focused solely on Georgia waters. This summer the team published a new study expanded to include global bodies of water and reporting.

“Not all CyanoHAB outbreaks are toxic, but that is why it’s so important to have early reporting,” said Deepak Mishra, lead author and associate head of the department of geography. “Once we know about the bloom, we can notify authorities to test the water directly and take action.”

“The sensors would trigger at regular intervals as satellites passed over, but what if we could get earlier warnings by using social media to trigger the sensors?” said Mishra.

The goal is to use citizen participation to find these blooms before they take over an entire body of water or cause harm.” — Deepak Mishra

The social cloud mines, stores and analyzes information from multiple social media platforms including Twitter, Facebook, the CyanoTRACKER website and mobile application. The data mining algorithms would look for keywords and hashtags such as #cyanotracker in social media posts and the nearest sensor can then be triggered to crosscheck the social media activity about the body of water. If the nearby sensor detects CyanoHABs, the team would then pull the satellite images from the time the post was made to visualize the bloom and validate the information from the post. 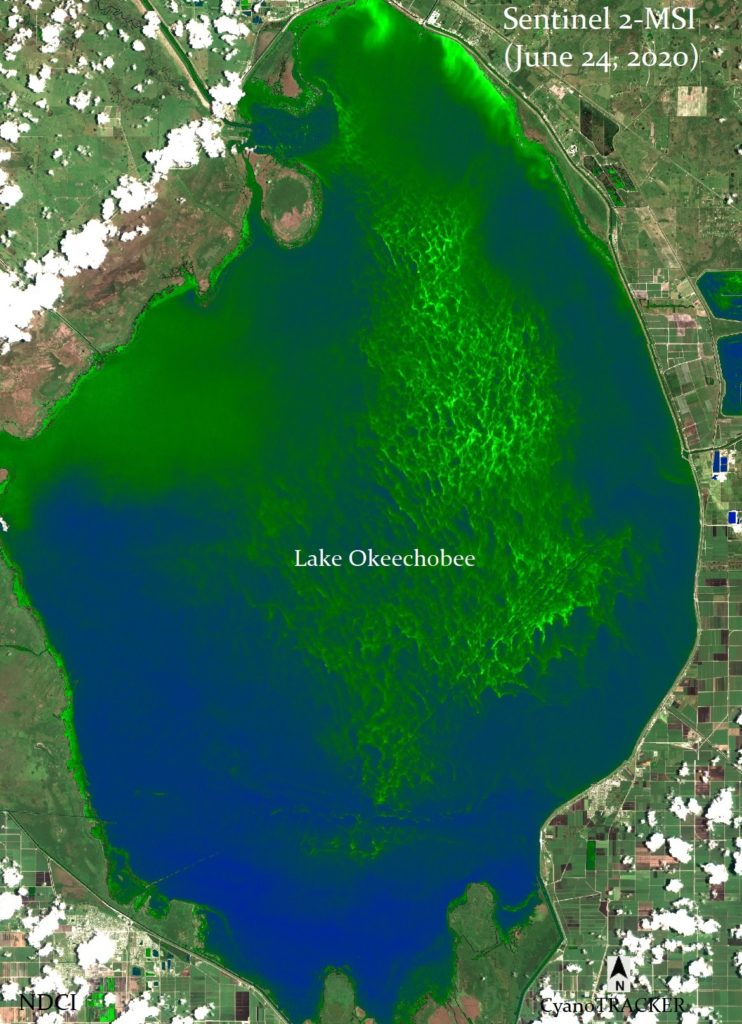 “The goal is to use citizen participation to find these blooms before they take over an entire body of water or cause harm,” said Mishra. “From there, we alert the lake management office so they can do water testing to confirm if the bloom is toxic or not. With that information they can start treatment of the water or post signage to restrict access.”

By integrating the social cloud, the team was able to identify sites of ongoing CyanoHABs as well as find many newer and lesser known locations. Social reporting also expanded the study parameters. While the team only had physical sensors in Georgia waters, they received reports from across the globe through the CyanoTRACKER mobile application. They were able to use satellite imagery to help confirm and create algae tracking maps for these reports.

“By integrating the community cloud, the sensor cloud and the social cloud, we create an interactive process for sustainable management of global water sources,” said Lakshmish Ramaswamy, professor in the department of computer science. “The cloud allows us to access data that was captured locally from anywhere in the world, process and share the results on a global scale.” 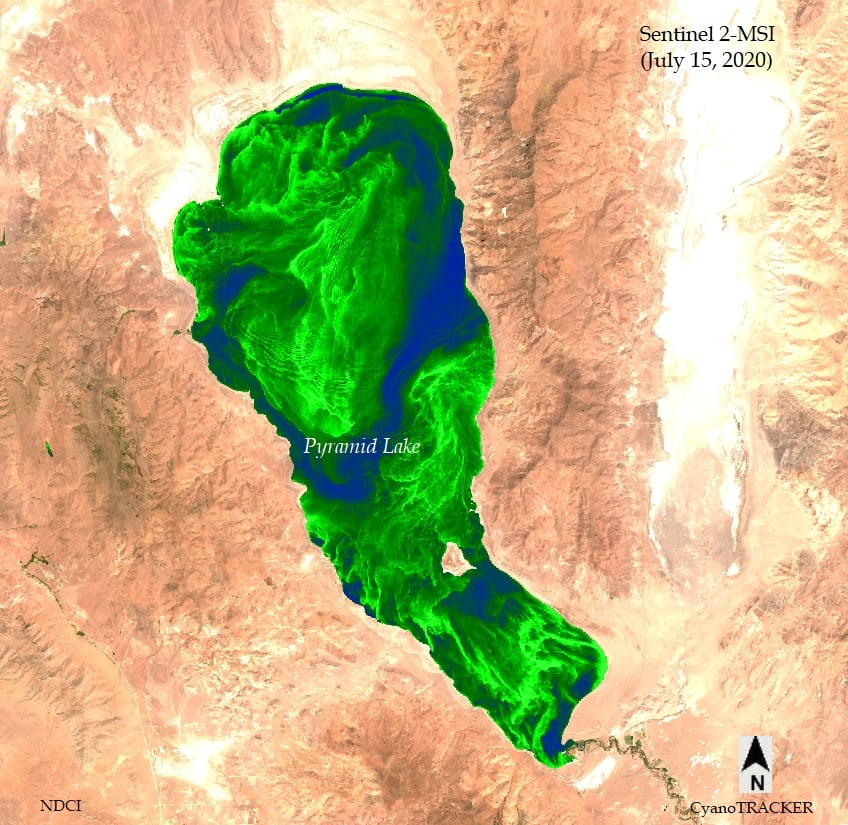 Although social media data filtering and grouping, sensor calibration, and remote sensing model accuracy issues remain to be resolved, the main objective of this study, which was to demonstrate a comprehensive system for multilayered data collection, processing, and generating CyanoHAB information for early warning and alerting has been achieved.

The pilot study of the project was supported with a seed grant from the Franklin College of Arts and Sciences and the UGA Office of Research.

This study is published in Harmful Algae and was funded by the National Science Foundation and Georgia Water Resources Institute.