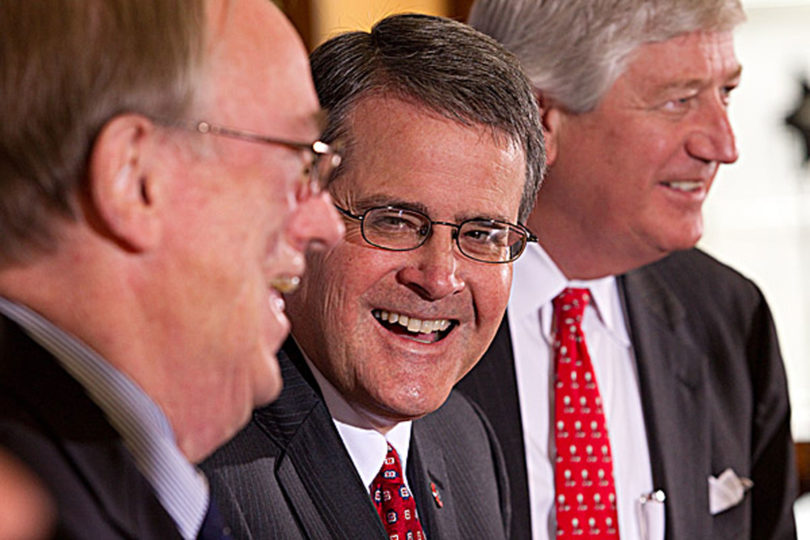 With a unanimous vote on Feb. 4, the University System of Georgia Board of Regents approved Jere Morehead as the university’s next president.

Morehead, current senior vice president for academic affairs and provost at UGA, will assume his new post on July 1.

“Jere has devoted the bulk of his career to the University of Georgia, and he has a great passion for the university and its service to students and the state of Georgia,” said Dink NeSmith, regents chairman. “He has tremendous challenges ahead,and the board will support him as he works to strengthen UGA’s programs.”

“(The board of regents) concluded and I concurred that having searched the country east to west, we found the person that we wanted and needed right here on campus,” Huckaby said.

“While the University of Georgia faces many economic challenges, I believe that if we focus on our academic priorities, we can and will reach new heights as an institution,” Morehead said. “The university is poised, thanks to our faculty, staff and students, to become one of the greatest public universities in this country. That belief will filter every decision that I make, how I spend my time and how I devote the university’s resources in the coming years.”

Morehead said he plans to devote the next five months to evaluating the university’s strengths and weaknesses. He also plans to visit and talk with alumni, supporters, legislators and other officials prior to taking charge in July.

“I think it will help me develop a fresh perspective regarding the changes that may be good for the University of Georgia going forward,” Morehead said. “I’ll also be contemplating possible organizational changes and certainly beginning the preparation for a major capital campaign to move us to the next level and provide us with the private resources necessary to remain nationally competitive.”

In some ways, Morehead’s thought process as president will be a continuation of his current post.

“When I became provost I said that I thought our institution needed to be less bureaucratic, it needed to be very responsive to our faculty, students, alumni and supporters, and that is an issue that I will continue to confront and to address going forward,” he said.

The Florida native also said he wants to lead the university through the largest capital campaign in its history.

Morehead said one of the most important things he can do as president is to keep the university focused on being “the strongest academic institution that we can possibly be.”

“That requires getting our entire structure behind a major capital campaign to move the university forward,” he said, “because we can’t assume that, in these economic times, we’re going to get our resources from any place other than our own friends and supporters.”

Morehead said he believes there exists a “very good relationship” between academics and athletics, and he has great confidence in Greg McGarity, the university’s athletic director, and his staff.

“In the end, I want to see our student athletes be successful in the classroom and to earn their degrees,” Morehead said.

“I also want to see them win a few championships along the way as well, and I don’t think that’s mutually exclusive. I think we do both very well here.”

Morehead will appoint an interim provost in the coming days and plans to name a small presidential transition team to advise him on key issues. He also said he will be focused on his current position and job duties.

“I’ve got four openings to fill for deanships in the Grady College, the School of Public and International Affairs, the College of Engineering and the Terry College of Business. And, soon, Rodney Bennett, vice president for student affairs, will be named president of the University of Southern Mississippi,” he said. “So I’ll have plenty to do on my schedule over the next five months as provost.”

Morehead’s career has covered a range of faculty and administrative posts at UGA. Prior to his current position, which he assumed in 2010, he served as UGA’s vice president for instruction, vice provost for academic affairs, director of the Honors Program and acting executive director of legal affairs.

In addition to his administrative responsibilities, Morehead is the Meigs Professor of Legal Studies in the Terry College of Business, where he has had a faculty appointment since 1986, first as an assistant professor teaching legal studies, rising through the ranks from associate professor to full professor. He also directed the School of Law’s Advocacy Program from 1986-1995.

After serving as a visiting professor at the University of Michigan in 1995, Morehead returned to the Terry College faculty in 1996. Before joining the UGA faculty, Morehead worked for the U.S. Department of Justice as a U.S. attorney from 1980-1986.

He is also the recipient of the Richard B. Russell Undergraduate Teaching Award, the Teacher of the Year in the Terry College of Business and the Lothar Tresp Outstanding Honors Professor Award.