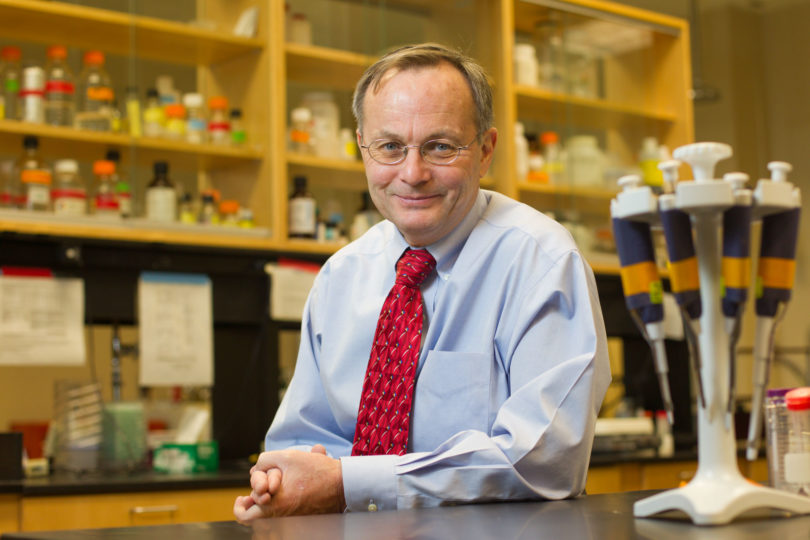 Carl Bergmann's initial year in Athens as a postdoctoral candidate turned into more than two decades of research and administration.

Bergmann, senior research scientist at the Complex Carbohydrate Research Center, director of the Savannah River Ecology Laboratory and assistant vice president for research facilities at UGA, is rarely still-or serious-except about his work. As his three-clause title suggests, he’s a researcher and administrator. But in his latest role as vice president for research facilities, he also functions as liaison, mediator and sometimes referee between research faculty, architects, physical plant workers and contractors.

As an administrator “it’s really about problem-solving, and for the most part, I’ve found it productive-and also, occasionally, very rewarding as well,” he said. “It’s given me an opportunity to learn more about other disciplines-nano science, for example, ecology, infectious diseases and many other areas-and it also has opened my eyes to potential new collaborations. I enjoy research, but I’ve been surprised at how being an administrator has allowed me to help others achieve their goals, and I get a lot of satisfaction from that.”

In 2001, Bergmann oversaw the planning, design and construction of the new CCRC, the 150,000-square-foot arts and crafts-style building on Riverbend Road. The building not only was completed on time, but also under budget, and with many energy-saving upgrades.

Bergmann describes his principal role as “making sure that monies spent on renovations and special research projects provide faculty with what they need-if not necessarily everything they want-without breaking the bank.”

Bergmann came to Athens in 1986 to work at the CCRC as a one-year postdoctoral candidate. He studied heparin, a glycosaminoglycan widely used as an injectable anticoagulant. His one year turned into two, and when it was over, he stayed to continue his work on glycans at the CCRC.

In 2007, Bergmann and colleague Ken McLeod took the reins of the troubled SREL which was in danger of closing after its long-time federal core support was eliminated. At that point, the lab lost some 65 faculty and research support staff. Since then, Bergmann and McLeod have helped the lab become more independent by re-establishing key relationships and by helping to secure grants from the Department of Energy and the National Nuclear Security Administration for specific projects. The lab is gradually recovering; by December 2010, the SREL had stable funding and was back to 65 scientists.

“I’m doing exactly what I want to be doing,” said Bergmann. “I feel lucky to live in Athens and work at UGA, especially at the CCRC.”