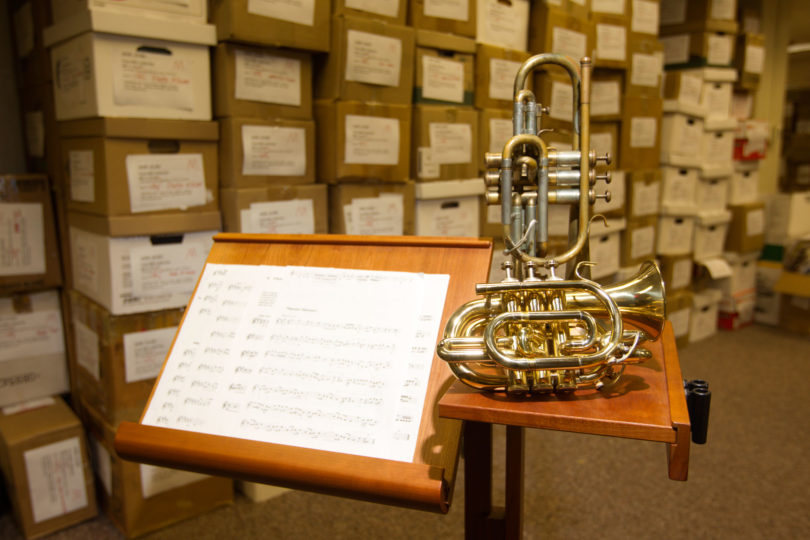 The late Fred Mills had quite a reputation-as a virtuoso trumpet player, an inspirational teacher, an enthusiastic performer and as someone whose generosity was unparalleled. As a continuation of his generosity, Mills’ family has given a large collection covering the span of his music career to the UGA Libraries.

After traveling for nearly 25 years with the legendary Canadian Brass, Mills joined the Hugh Hodgson School of Music in 1996 to establish its trumpet program. While at the university, he helped establish the UGA Brass Quintet and the Bulldog Brass Society, the graduate brass quintet. Mills died from injuries sustained from a September 2009 car collision when he was returning to Athens from an overseas performance.

“In recognition of the tremendous contributions that Fred made to the music world, of the scores of people around the world who were touched by his life and teaching, and particularly the wonderful brass program at the University of Georgia, to which he devoted his post-Canadian Brass life, his family felt that it was fitting for his music collection-scores of original compositions, recordings, videos, posters and artifacts-to be housed in the UGA Libraries, where it can continue to benefit people for years to come,” said Robert Sutherland, a longtime friend of Mills and chief librarian of the Metropolitan Opera.

More than a dozen trumpets from Mills’ collection of brass instruments will be housed in the music school, where they will be checked out by students for use in the ensembles and work on lesson and recital assignments.

Additionally, the UGA Libraries will house the collection of the late Mel Broiles, who served as principal trumpet for the Metropolitan Opera and was on the faculty at the Julliard School. Mills had acquired Broiles’ compositions, arrangements and memorabilia following his 2003 death, with the intention of creating a repository.

A third component of the collection-each of which is thought to be the most complete collection existing-focuses on the many Canadian Brass arrangements written by Mills. Scrapbooks, show costumes and artifacts round out the assemblage.

“Both Mills and Broiles, as well as the Canadian Brass, were highly influential on brass music of the 20th century. They revolutionized the way brass music was performed and gained a strong following with their performances and in teaching rising brass performers into the 21st century,” said P. Toby Graham, deputy university librarian at UGA. “To have a collection such as this with the depth and breadth of original works with supporting documentation should make this become an outstanding resource for any musician or enthusiast of brass music.”

Because of the immense size of the collection, it will not be available to the public until the opening of the new UGA Special Collections Libraries Building, set for fall 2012. It will be housed in University Archives, a unit of the Hargrett Rare Book and Manuscript Library, one of three special collections at UGA.