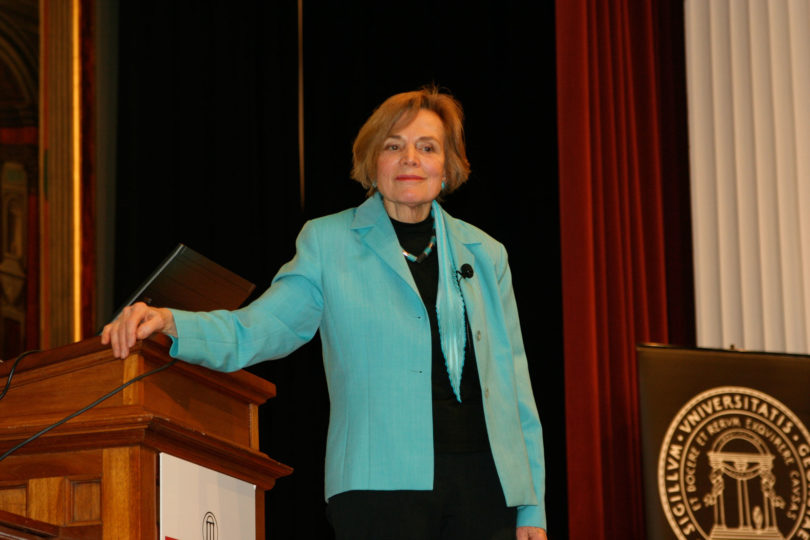 As the image of a pelican covered from beak to foot with crude oil from last year’s Deepwater Horizon blowout in the Gulf of Mexico blazed across a giant screen hung in the Chapel, Earle told the packed audience that the scene was inspiring.

“This should be a picture that gives us hope,” she said. “Because now we know and are personally burdened with knowledge of what we have to do to protect that which keeps us alive.”

As the former chief scientist for the National Oceanic and Atmospheric Administration and current explorer-in-residence at National Geographic, Earle has been internationally recognized for her work with oceans and sea life.

Her lecture was part of the three-day symposium, “Building Bridges in Crisis,” that included a series of panel discussions featuring prominent scientists, reporters and government officials that focused on improving information flow during crises.

The message of Earle’s talk was simple: Now that we understand that we’re harming the planet, which sustains our lives, we have to stop

“It’s the same with the atmosphere,” she added. “We thought that it’s so big, so vast, and we’re so puny that humans cannot influence it. But now we’re beginning to realize that there are limits to what we can get away with as we impact the natural world.”

This knowledge should force people to take action, according to Earle.

“Now we know things that we couldn’t have known half a century ago, even five years ago,” she said. “All of this new knowledge gives us an edge over any people who have existed before and any who will exist in the future.”