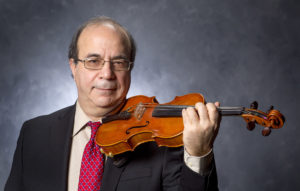 Levon Ambartsumian, Franklin Professor of Violin, will perform his Faculty Artist Series concert March 2 at 7:30 p.m. in Ramsey Hall. His program, “Jewels of the Romantic Era,” features works of the Schumanns and their circle.

“This concert is all about the  Schumann family—Robert himself, his wife and fantastic pianist Clara and Johannes Brahms, who was a very close friend, almost a member of their family,” said Ambartsumian.

Joining him on the stage will be professor of piano Evgeny Rivkin, Ambartsumian’s lifelong friend and music partner. Included in their program is a selection of short pieces composed for different instruments performed on violin, most famously Schumann’s “Violin Sonata.”

“Marchenbilder (Fairy Tale Pictures) Op. 113” was originally composed for viola and piano. “Fantasie—Stucke Op. 73” were pieces intended for clarinet but later became an important part of viola and cello repertoire, and very rarely performed on violin. “Drei Romanzen Op. 94,” also known as the “Three Romances,” was originally written for oboe and piano and is the only piece Robert Schumann ever wrote for oboe.

“What makes this program really unique is a combination of well known compositions, almost unknown as violin works, and Brahms’ ‘Adagio’ from a clarinet quintet,” said Ambartsumian.

Ambartsumian’s friend, Russian composer Efrem Podgaits, composed this arrangement of the “Adagio” for him. It will be the American premiere of Podgait’s transcription for violin and piano.

Ambartsumian and Rivkin will be taking the same program to Moscow later this year and have also recently released a CD with music by Mendelssohn and Chausson on the Centaur label.

Tickets for the performance are $12 for adults and $3 for students and children, and are available through the Performing Arts Center. They can be purchased online at pac.uga.edu, by calling 706-542-4400 or in person at the box office.