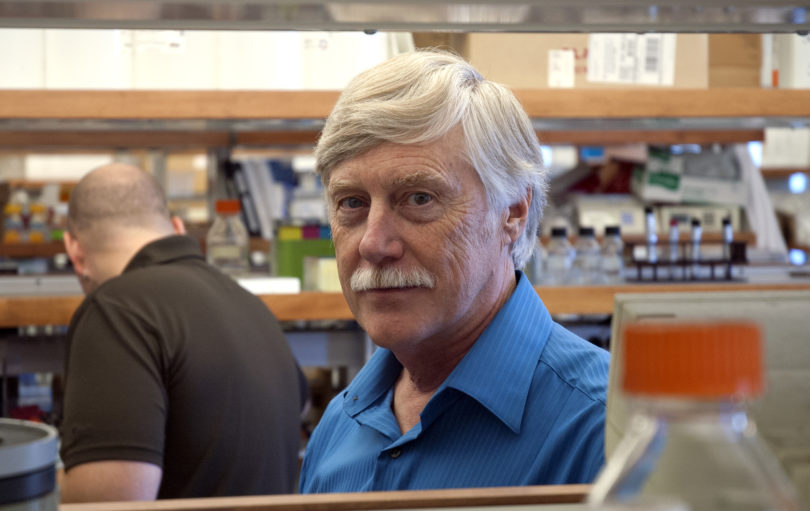 Athens, Ga. ‒ University of Georgia microbiologist Harry Dailey has received a $1.5 million grant from the National Institutes of Health to study the molecular mechanisms behind a class of previously unidentified anemias that result from disordered processes in red blood cell formation.

“The SHINE program was designed to encourage and support research into specific areas that the NIDDK felt would lead to the identification of the molecular basis for some idiopathic anemias,” said Dailey, director of the Biomedical and Health Sciences Institute at UGA and a professor of microbiology and biochemistry and molecular biology in the Franklin College of Arts and Sciences.

Anemia is the most common blood disorder in the U.S., affecting more than 3.5 million Americans. The disease is characterized by a decrease in the level of healthy red blood cells or in hemoglobin, the red blood cell’s predominant, oxygen-carrying protein.

With fewer hemoglobin molecules providing less oxygen to the tissues of the body, individuals with anemia often feel tired or weak. Additional symptoms can include shortness of breath, rapid heartbeat, pale skin, dizziness, headache and cold hands and feet. Left untreated, anemia can lead to complications such as chronic fatigue or organ dysfunction and damage, including heart arrhythmia and heart failure.

Hemoglobin is made up of the globular protein globin and a small iron-containing molecule named heme, which serves as the binding site for oxygen. The molecular processes responsible for creating these two components are tightly regulated during red blood cell formation and disequilibrium in either pathway can lead to disease.

“I always tell people to think of an assembly line for making cars,” Dailey said. “In the end, you want to have the same number of engines or heme as you have car bodies or globin. If you make too little globin, you end up with diseases called thalassemias, fairly common hereditary forms of hemolytic anemia. Or if the problem lies with too little heme, you may end up with an iron deficiency anemia or a metabolic disorder, such as porphyria.”

An overabundance of either heme or globin is toxic as well, he added.

Dailey’s work focuses on explaining some of the “assembly line” processes responsible for making heme, particularly the incorporation of elemental iron, which is the terminal step in heme synthesis. Dailey and his lab have spent the past two decades characterizing the structure and function of the key player in this process, the enzyme ferrochelatase.

The SHINE project stems from an ongoing collaboration with Dr. Barry Paw, a hematologist and associate professor of medicine at Harvard Medical School, who has studied anemia and iron metabolism in zebrafish for the past decade.

“Paw‘s laboratory recently characterized one particular mutant line of zebrafish named pinotage,” Dailey said. “These fish exhibit microcytic, hypochromic anemia. That is, they make red blood cells that are smaller than normal and have diminished amounts of hemoglobin.”

In determining the genetic mutation responsible for the pinotage anemia, Paw’s group discovered a possible link to ferrochelatase. Collaborative work between the Paw and Dailey groups provided evidence that ferrochelatase may play a significant role in the regulation of erythropoiesis, or red blood cell formation.

“We believe that the two iron-two sulfur [2Fe- 2S] cluster of ferrochelatase allows it to sense certain metabolic fluxes in the cell and respond to those fluxes in an appropriate way,” Dailey said. “Since this is all new, we don’t exactly understand how this happens and what all the parameters involved in this regulation are, but that is what this new project funded by SHINE is designed to answer.”

Overall, Dailey believes the study’s results will impact the field of erythropoiesis significantly with the establishment of a new regulatory player in heme synthesis. Additionally, new areas of investigation will open, and the molecular basis of currently undefined red blood cell-based syndromes and diseases may be revealed.

Dailey will be working on the project with long time UGA collaborators Michael Johnson, Distinguished Research Professor of Chemistry, and William Lanzilotta, an associate professor of biochemistry and molecular biology. Johnson worked with Dailey to first identify the iron/sulfur cluster in ferrochelatase. Lanzilotta, a protein crystallographer, has contributed to characterizing the structure of the enzyme.

“This is really satisfying for me, because we have tried to figure out what role the iron-sulfur cluster in ferrochelatase plays ever since we first identified it,” said Dailey. “Now, we finally have a really good idea thanks to the help of a small anemic fish.”

The research is being supported by NIH SHINE program grant 1RO1DK096051-01.