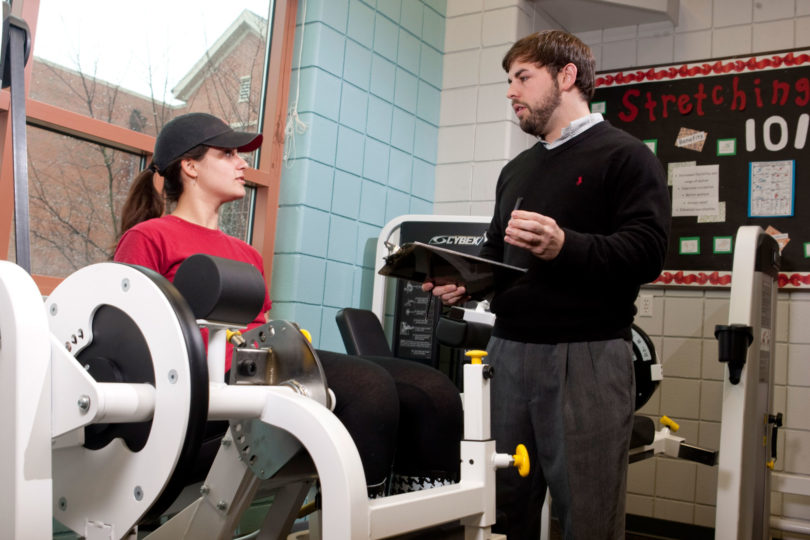 Approximately 3 percent of the U.S. population suffers from excessive, uncontrollable worry that reduces their health and quality of life. The condition, known as generalized anxiety disorder, is difficult to overcome and is accompanied by a host of physical symptoms including fatigue, muscle tension, irritability and poor sleep. However, a new UGA study shows that regular exercise can significantly reduce anxiety symptoms in patients with GAD.

In a study published online in Psychotherapy and Psychosomatics, researchers randomly assigned 30 sedentary women ages 18-37 diagnosed with GAD, to either a control group or six weeks of strength or aerobic exercise training. Women in the exercise group completed two weekly sessions of either weight lifting or leg cycling exercise. Remission of the disorder, determined by psychologists who were unaware of the treatment each client received, was higher among exercisers and best among those who performed weight lifting exercise. Worry symptoms, the primary problem among individuals with GAD, were significantly reduced among the exercisers, and moderate-to-large improvements in other symptoms, such as irritability, feelings of tension, low energy and pain, were found.

Matthew Herring, now a research associate in the department of epidemiology at the University of Alabama, Birmingham, led the study during his dissertation research as a doctoral student in the College of Education’s kinesiology department. The team also included Patrick O’Connor and Rodney Dishman, co-directors of the UGA exercise psychology laboratory, psychology professor Cynthia Suveg and doctoral student Marni Jacob.

“Our findings add to the growing body of evidence of the positive effects of exercise training on anxiety,” Herring said. “Our study is the first randomized controlled trial focused on the effects of exercise training among individuals diagnosed with GAD. Given the prevalence of GAD and drawbacks of current treatments, including expense and potential negative side effects, our findings are particularly exciting, because they suggest that exercise training is a feasible, well-tolerated potential adjuvant therapy with low risk that can reduce the severity of signs and symptoms of GAD. Future research should confirm these findings with large trials and explore potential underlying mechanisms of exercise effects among individuals with GAD.”

The study also examined potential interactions between exercise and drugs used to treat GAD. Half of the participants in each group were taking a medication to treat GAD during the exercise program. Exercise training lessened anxiety symptoms to the same degree among those taking medication compared to those not taking medication.

“The large improvements found in this small investigation show that regular exercise has the power to help calm women suffering from GAD, even among those who appear to be resistant to treatment using medication,” O’Connor said.

“The results of this research are very exciting because exercise is available to everyone, is relatively inexpensive and has beneficial effects beyond the reduction of anxious and depressive symptoms,” Suveg said. “For individuals suffering from impairing symptoms, these preliminary findings suggest that exercise may offer another potential treatment option that has few, if any, negative side effects. Future research needs to explore the long-term benefits of exercise as well as the conditions under which exercise may be most beneficial and for whom.”