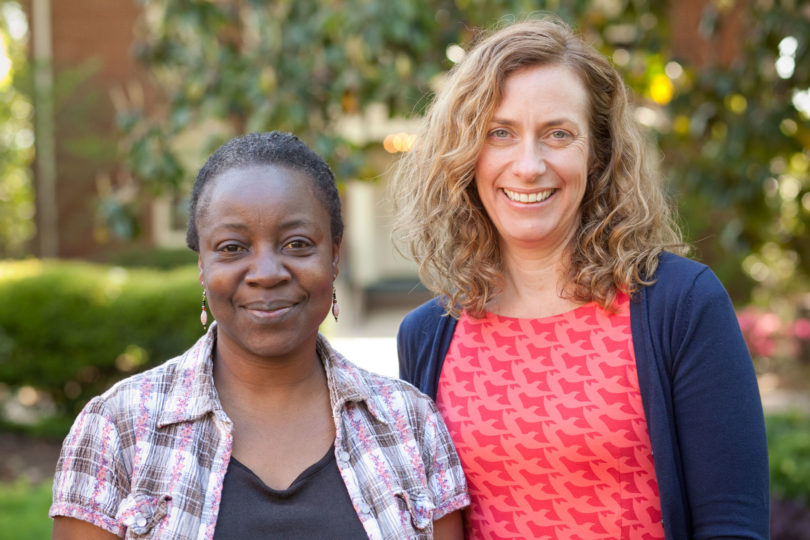 As co-directors of the Athens Music Project

In August, the Jane and Harry Willson Center for Humanities and Arts launched its Faculty Research Clusters initiative, which UGA President Jere W. Morehead has said “will play an important role” in highlighting the arts and humanities at the university and attracting research funding, “a critical goal” of his administration.

The program supports groups of UGA faculty who are organized to address large-scale humanities and arts questions in partnership with colleagues from allied departments, colleges, centers and institutes.

The Athens Music Project is a research cluster co-directed by Jean Kidula, associate professor of music and African studies, and Susan Thomas, associate professor of music and women’s studies. Thomas and Kidula are ethnomusicologists in the Hugh Hodgson School of Music who formed the cluster to create a platform for research, creative development and shared expertise in, about and for Athens’ diverse musical communities. Kidula and Thomas consider the city to be a unique location both regionally and nationally, and not only for its famed independent rock scene.

The Athens Music Project will take into account the city’s variety of African-American musical traditions, both secular and religious; its growing jazz scene; bluegrass and other folk music traditions; the Latin American/Latino musical community; new music and conceptual sound art; as well as Athens’ historic role in both classical music and musical theater.

The cluster will be designed to take in contributions from a range of sources. Associated projects currently underway include a study of early music education in Athens by Stephanie Tingler, associate professor of music; a project by music graduate student Mary Helen Hoque focusing on George Davis, an African-American bandleader who formed the city’s first civic band during Reconstruction; and research on John Vaughan, an early-20th century hymn composer whose Athens publishing house distributed music nationally, by Kevin Kelly, the Hodgson School’s music librarian.

“Part of what we’re doing is setting up an infrastructure to facilitate other people doing research,” Thomas said, “whether that’s our students, or whether it’s people, both in the university and the community who already are doing that kind of work in a little vacuum so that we can give them a resonating space to share and showcase what they’re doing.

“As ethnographers,” she said, “we do narrow and deep research. With the Willson Center grant, we’re envisioning having the ability to build an infrastructure into which we can plug other ‘narrow and deeps.’ “

In addition to the cluster’s potential value to academics, Kidula said that people outside the university have come forward with such an unexpected wealth of historical research, heirlooms and ephemera that the Athens Music Project could become a sort of “clearinghouse” for archival materials. And the response from local musicians to a cluster-affiliated class on Athens music taught by ethnomusicology graduate student and local musician Kai Reidl has been “incredible,” according to Thomas, with more offers to participate than the class can accommodate.

The cluster also interacts with the public through advisory events and roundtables focusing on production and community-oriented musical activism. An upcoming event is a Nov. 12 roundtable discussion on the role of music production in communities-and in Athens in particular-as part of the UGA Spotlight on the Arts festival.

In the spring, the Athens Music Project will partner with the second annual Slingshot festival, which blends music, art and technology, holding a symposium during late March. And a partnership with the UGA Institute for Women’s Studies will add an arts-focused performance component to the 2014 Women and Girls in Georgia conference.

Kidula sees Athens as an unusually fertile site for localized music research, and in turn a valuable asset for students.

“It is a rich place with an immense amount of musical materials,” she said.