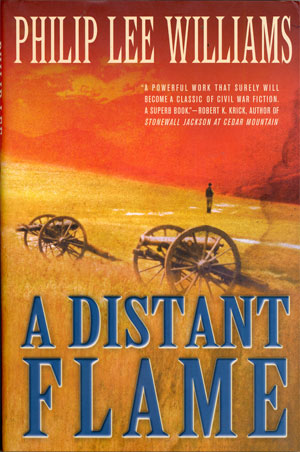 Most Civil War novels have focused on the storied battlefields in Virginia, Maryland and Pennsylvania-with occasional exceptions such as Shiloh, in Tennessee. A Distant Flame covers the ground of Sherman’s searing campaign through Georgia, a conflict that began just south of Chattanooga and reached the gates of Atlanta.

Written by Philip Lee Williams, public relations coordinator and adjunct professor of creative writing in the College of Arts and Sciences, the novel took 10 years of research and writing.

The story is about a sensitive young boy named Charlie ­Merrill, who loses much while living in the small town of Branton, Ga., during the war, then joins the Confederate troops as a sharpshooter in the campaign toward Atlanta.

A Distant Flame is also a love story, focusing on Charlie’s relationship with a young Boston girl stranded in Branton at the outset of the war.

“The Civil War remains terribly important for anyone who truly wants to understand our country,” Williams says. “The great gains of the civil rights movement flow directly out of social changes that came out of the war. Shelby Foote said, quite accurately I think, that the Civil War was the crossroads of our being.”