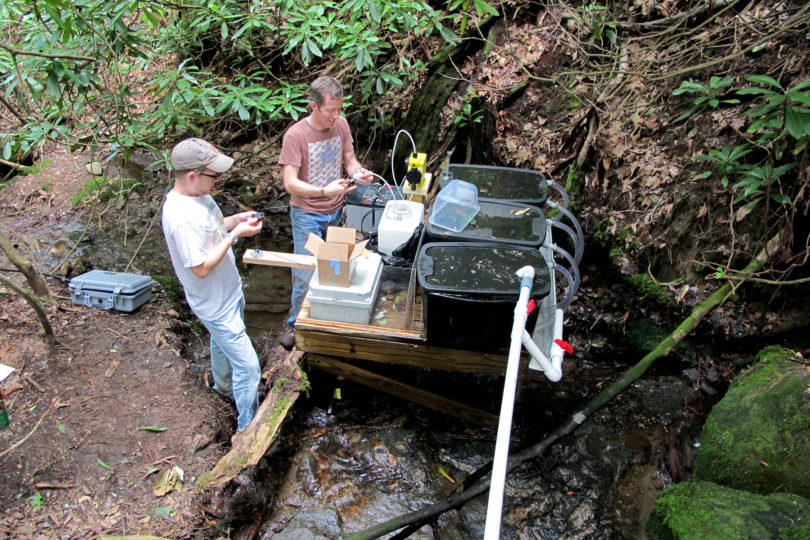 Athens, Ga. – An important food resource has been disappearing from streams without anyone noticing until now.

In a new study published March 6 in the journal Science, a team of researchers led by University of Georgia ecologists reports that nutrient pollution causes a significant loss of forest-derived carbon from stream ecosystems, reducing the ability of streams to support aquatic life.

The findings show that the in-stream residence time of carbon from leaves, twigs and other forest matter, which provide much of the energy that fuels stream food webs, is cut in half when moderate amounts of nitrogen and phosphorus are added to a stream.

“This study shows how excess nutrients reduce stream health in a way that was previously unknown,” said the study’s lead author Amy D. Rosemond, an associate professor in the UGA Odum School of Ecology.

Stream food webs are based on carbon from two main sources. One is algae, which produce carbon through photosynthesis. Nutrient pollution has long been known to increase carbon production by algae, often causing nuisance and harmful algal blooms. The second source is leaves and bits of wood from streamside forests. This forest-derived carbon typically persists year-round, making it a staple food resource for stream organisms.

“Most people think of nitrogen and phosphorus pollution in streams as contributing to algae blooms,” said Diane Pataki, program director in the National Science Foundation’s Division of Environmental Biology, which funded the research. “But streams contain a lot of leaf litter, and this study shows that nutrient pollution can also stimulate carbon losses from streams by accelerating the breakdown of that litter. That helps us better understand how fertilizer runoff affects carbon transport and emissions from streams and rivers.”

Nitrogen and phosphorus play essential roles in the breakdown of carbon by microbes and stream-dwelling insects and other invertebrates, but cause problems when they are present in excessive amounts—as they increasingly are. Nutrient pollution is widespread in the U.S. and globally, due primarily to land use changes like deforestation, agriculture and urbanization.

Nutrient pollution’s effects on algal carbon are well known and highly visible in the form of algal blooms. Little was known about how nutrient pollution affects forest-derived carbon in stream food webs, so Rosemond and her colleagues devised a set of experiments to find out.

Working at the Coweeta Hydrological Laboratory, a U.S. Department of Agriculture Forest Service and National Science Foundation Long Term Ecological Research site in North Carolina, they set up a system to continuously add nutrients to several small headwater streams. The first experiment ran for six years in two streams, and the second for three years in five streams, with different combinations of nitrogen and phosphorus to mimic the effects of different land uses.

The researchers found that the additional nutrients reduced forest-derived carbon in whole stream reaches by half.

“We were frankly shocked at how quickly leaves disappeared when we added nutrients,” said Rosemond. “By summer, the streams looked unnaturally bare.”

“It’s very apparent when excess nutrients lead to algal blooms in rivers and other aquatic ecosystems,” said study co-author Jon Benstead, an associate professor of biological sciences at the University of Alabama. “But their impact on accelerating the breakdown of dead organic matter, such as leaves and twigs, is a significant but under-appreciated effect on the health of freshwater ecosystems across large areas of the world.”

Rosemond likened the impact of the loss of forest-derived carbon to the doubling of algal carbon that nutrient pollution can cause.

“But this is not a zero-sum game,” she said. “Increasing one form of carbon and decreasing another does not equate; these resources have unique roles in stream food webs and nutrients are affecting their relative availability.”

“Leaves and twigs and the microbes that live on them are also particularly important in taking up pollutants like nitrogen and phosphorus,” Rosemond said. “Ironically, by stimulating the loss of these resources with nutrients, we lose a lot of their capacity to reduce the nutrients’ effects. This means that more nutrients head downstream where they can cause problems in lakes and estuaries.”

Rosemond said she hopes the study’s findings will be incorporated into policies aimed at reducing nutrient pollution, which currently focus on algae.

“There has been limited national progress in efforts to reduce the impact of nutrient pollution in the U.S., according to a U.S. Geological Survey study,” she said. “Our results provide a more complete picture of nutrient effects in streams, suggesting that increased efforts at addressing their impacts can now improve stream health in more than one way.”

Support for the study was provided by the National Science Foundation. Additional coauthors are Phillip M. Bumpers, David W.P. Manning and J. Bruce Wallace of the Odum School of Ecology; Keller Suberkropp of the University of Alabama; Vladislav Gulis of Coastal Carolina University and John S. Kominoski of Florida International University.