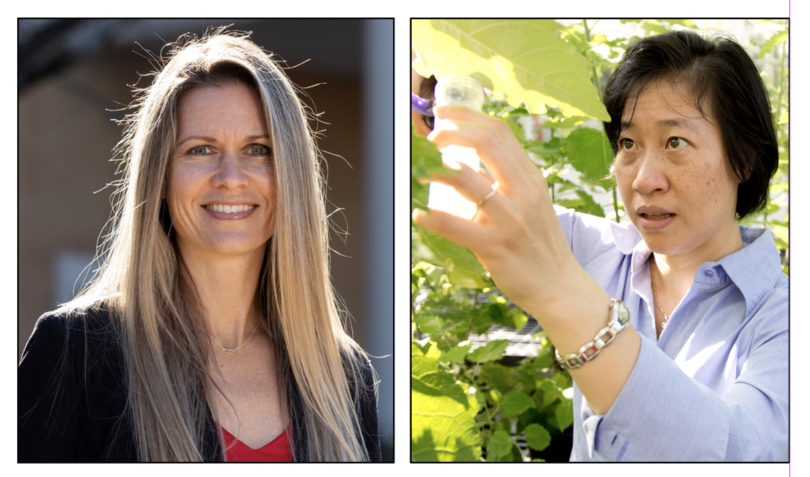 Jamie Cooper, left, and C.J. Tsai were named directors of the Obesity Initiative and The Plant Center, respectively. (Photos by Andrew Davis Tucker)

New directors were appointed to two research centers in the Office of Research this summer, as Jamie Cooper (College of Family and Consumer Sciences) and C.J. Tsai (Warnell School of Forestry and Natural Resources) took the reins of the Obesity Initiative and The Plant Center, respectively.

Taking over as of July 1, Cooper is ready to lead the Obesity Initiative to the forefront of obesity research in the U.S.

“I really want the Obesity Initiative to be the face of obesity research, and when people think about obesity research, I want them to think of the University of Georgia,” said Cooper, an associate professor in FACS and a Fellow in the Obesity Society, founded in 1982 as the leading professional society focused on obesity science, treatment and prevention.

Cooper, whose research encompasses a number of areas from human obesity to sports nutrition, aims to expand the Obesity Initiative’s research programs by encouraging more groups and individuals to get involved. According to her, the time to fight the obesity crisis in Georgia is now.

“What’s most important is that in Georgia we recognize this is a public health concern and we want to do something about it,” Cooper said. “If researchers want to get involved, we will have opportunities for them, and we’ll try to foster as many collaborations as possible.”

Tsai, a Georgia Research Alliance Eminent Scholar and professor in plant biology, genetics and forestry, will transition to interim director for The Plant Center on Sept. 12, taking over from the previous director, Scott Jackson.

Tsai, who was director of The Plant Center prior to Jackson from 2014 until 2017, is eager to see the continued research and innovation that stems from collaborations between faculty, students and other researchers.

“The Plant Center has been a focal point for exciting interactions among graduate students, postdocs, researchers and faculty, and an incubator for innovative research and interdisciplinary collaboration,” said Tsai. “It has a rich history of research excellence and continues to be a significant strength at UGA.”

With the support of the center’s members and advisory committee, Tsai will facilitate election of a new director in the spring.

“I look forward to working with Jamie and C.J. in their new roles, and to the leadership they will bring to these two important research units,” said David Lee, vice president for research. “Both of these programs have huge import for the health and economic vitality of the state of Georgia as well as the rest of the globe.”